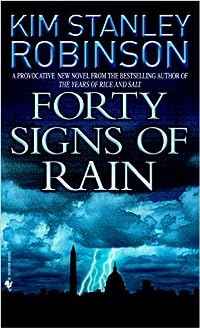 The bestselling author of the classic Mars trilogy and The Years of Rice and Salt returns with a riveting new trilogy of cutting-edge science, international politics, and the real-life ramifications of global warming as they are played out in our nations capitaland in the daily lives of those at the center of the action.

Hauntingly realistic, here is a novel of the near future that is inspired by scientific facts already making headlines.When the Arctic ice pack was first measured in the 1950s, it averaged thirty feet thick in midwinter.

The third year it began in May. That was last year.Its an increasingly steamy summer in the nations capital as Senate environmental staffer Charlie Quibler cares for his young son and deals with the frustrating politics of global warming.

But the political climate poses almost as great a challenge as the environmental crisis when it comes to putting the public good ahead of private gain.

While Charlie struggles to play politics, his wife, Anna, takes a more rational approach to the looming crisis in her work at the National Science Foundation.

There a proposal has come in for a revolutionary process that could solve the problem of global warmingif it can be recognized in time.

With style, wit, and rare insight into our past, present, and possible future, this captivating novel propels us into a world on the verge of unprecedented changein a time quite like our own.

Glimpses Of An Ordinary Future How would it be to live in the very near future? What will happen once we cross the rubicon, the point beyond which climate change overwhelms the Anthropocene and humans are no longer in charge of their surroundings? 300 Tons of Weapons-grade Uranium and Plutonium Unaccounted For. High Mutation Rate of Microorganisms Near Radioactive Waste-treatment Sites. It is not meant to shock and awe the audience; or to use the disaster potential of sudden climate change to produce high drama. Instead it is a very subtly constructed future, achieved by sketching ordinary people from specifically selected walks of life that the audience knows are bound to be affected, and thus pays attention for tiny hints on how they have been in fact affected even as they go about their daily lives. We soon notice that the plot advancing moments have a tendency to be connected to the changed world they live in. The plot operates mostly in what KSR clearly considers to be the Theaters of the Future - Science & Politics. In fact, a core sub-plots of the book, and one of the key ideas in it, is about the Paradigm Shift (yup, Kuhn again) that has to occur in the field of science to make the scientists aware of their political responsibility. A Disaster Too Slow Of course, most of the characters are scientists or politicians, and all of them have adequate information, theories and concerns, and fully appreciates the threat that global warming poses, but they just can't seem to awaken a Day After Tomorrow sort of urgency in their lives.

The next year the breakup started in July, and at times more than half the surface of the Arctic Ocean was open water. This book here is no exception: it deals with climate change and its implications on people, from the average citizen, to scientists, lobbyists, senators up to presidential staff and also on political, economic and social environment. What is happening now in US, the withdrawal from Paris agreement and the nonsense about carbon dioxide not being one of the major factors in climate change is, more or less, what youll find in this book (of course, Paris Agreement did not exist when the book was written, but Kyoto Protocol is mentioned). The thing is, Mr. President, the worlds climate can shift very rapidly. If that were to happen, Europe could become something like the Yukon of Asia. Depends on what you mean by know for sure, Charlie said doggedly. Bottom line: if youd like to know how KSR envisioned nowadays, go and read the book.

Hence, having re-read Antarctica, I thought I would bash on through the 40, 50, 60 series and see how they looked as one long book. In fact, reading the three in succession, it is obvious that it is one long novel chopped into parts and works better considered as a whole.

For those of you that don't read KSR, his books are SO well researched and grounded in REAL science, they are called future history, not sci-fi. This means we get snow in Texas and Florida, and places like Washington and Missouri get winters with cold that 50 degrees below zero. Global warming becomes a global climate crisis, and billions don't die, but thousands die and millions of people are miserable. This book makes you understand the toll this would take on people, utilities, police and fire department, and local, state and federal governments. It also makes you understand how government works on a level you haven't seen since School House Rock's "I'm Just a Bill".

It was the first book in a trilogy, certainlyIm not sure Ive ever read such a long book that was almost entirely setup. StillI kind of want to read the next volume and see what happens next.

It is a problem IMHO when the first 350 or so pages of a book are pretty much character development and setup, and only the last 25 or so pages show you actual plot. I'm someone who actually supports the idea that global warming is indeed a serious problem, so in general principle I agree with the book's overall politics. The characters got interesting enough, and the actual final pages set up an interesting enough situation, that I am rather curious about what happens next and am still considering whether I want to go get Book Two, Fifty Degrees Below.

I gave this book 4 stars because there were so many things I loved about it. The Anacostia River basin is completely flooded, and we hear absolutely nothing about the death and destruction that had to occur in the black community there. No, and this is a good thing because this really is not a stand-alone book - it feels like a cliffhanger.

After a while I realized I only continued to read because I couldn't believe KSR was going to continue to bleed the life away from his truly compelling narrative idea - civilization at the edge of abrupt climate change - with hundreds of pages of didactic science, hokey dialogue and maddening detailed descriptions of commutes, grant review panels, breast pumping, and packing lunches about his narrow group of protagonists. I was rewarded for my skimming without about twenty pages of true narrative action and consequence towards the end of the book.

So I put the Three Californias and this -- which sounded incredibly relevant to my interests -- on my Bookmooch wishlist and had quite forgotten about it until it was sent to me a year later and, being in a bit of a reading rut with all my current chosen books, I opened it with curiosity. It rotates between four POV characters, three scientists and one political staffer (also three male and one female, all white and straight) and is set in very-near-future Washington DC as well as San Diego. But man oh man does this book not live up to its subject matter, ruined by the twin prongs of straight white male fuckery and eye-peelingly mediocre writing. The other three narrators aren't so offensive -- the other dude scientist has no noticeable personality because his chapters are all about explaining biomath to the reader; the lady scientist's entire story is about her enjoyment of statistics and her helping the Khembalis; and her husband, staffer and stay-at-home dad is probably the best character although I could really do without the weird asides about his sex life. The most interesting thing about this book is the part that Kim Stanley Robinson couldn't control and had no knowledge of; the fact that it was published just before Katrina and thus is basically all setup for a fictional climate-based natural disaster on U.S. soil, because (as is clearly his thesis) political action will only come about after the U.S. is directly affected by global warming. And has continued to not change shit, eight years later.