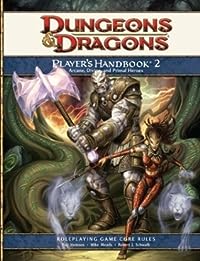 New classes, races, and other options for your D&D(R) game.This book builds on the array of classes and races presented in the first Player's Handbook (R), adding both old favorites and new, never-before-seen options to the game.The book adds a new power source for 4th Edition D&D classes using the new primal power source include the barbarian and the druid. Player's Handbook 2 expands the range of options available to D&D players with new classes, races, powers, and other material.

This is what the PHB contains: New power source: * Primal: which is spirits of nature and stuff, opposed to demons but not necessarily on good terms with the divine. The deva racial encounter power is to get a +1d6 bonus to any attack/skill/ability check by drawing on knowledge from past lives. New classes: * Avenger (divine striker): Lots of exciting light- and fire-based effects, summoned angels, that sort of thing. * Barbarian (primal striker): Unlike the ranger or warlock, the barbarian doesn't pick out one opponent who gets extra damage, it just has at-wills that do a die or two of extra damage beyond 1W:+Str. Barbarian daily powers are all a big attack followed by a "rage", which is like a stance in that it gives some on-going benefit until the encounter ends or another rage is used. * Druid (primal controller): The druid gets to assume wildshape pretty much at will, but it doesn't provide any mechanical benefit except being able to use the class powers marked "beast form". The chaos sorcerer has lots of randomness, like rolling to see what energy resistance it gets after an extended rest, or rolling to see what kind of energy damage and extra effect an attack power does, or getting small extra effects if the attack die showed an even number, so it probably does deserve to be a separate class. * Warden (primal defender): A lot of the warden's daily powers are polymorphs that give some small bonuses for the rest of the encounter (or until another such power is used) and an attack of roughly daily-power level that can be used once while in that form.

One reason I feel that these should not have been "additions" is because these classes round out and fill out to the new MMO-style paradigm D&D4.0 adopted - for example, PHB1 had only a single "controller", so PHB2 brings out more "alternatives". Aside from these, there's a just couple more feats, items, and rituals for the new classes, plus some simple rules on background/racial bonuses.

These martial powers give plenty of options and capabilities to the martial classes that spice up the game and provide tactical options beyond "I swing a sword." 4th Edition also reminds me of Savage Worlds with its clean and quick combat system and action points. Anyone who is busy and doesn't have the time to wade through arcane and needlessly intricate rules to run a quick game on a weekend will be pleased by the new edition while I suspect the hardcore gamers and the power gamers will be upset since it is much harder to exploit the system to make obnoxiously powerful characters and it will take less skill to make an interesting character thus allowing the "masses" to compete with their masterful character builds. When I designed rpg's a friend of mine was the first person I had make a character because he instinctively could exploit every loophole so that I could close them. Just take a look at the character build arenas for Neverwinter Nights 2 to see how quickly a naive newcomer gets slaughtered by one who has mastered 3rd edition's ruleset well NWN2's 3.5 version at least. I haven't been this excited about a new edition or rpg since I heard they might be making a second edition of Amber DRPG the game designer fall back game:) Enjoy!

All the emphasis on actual role-playing and story-telling was pushed back to make way for skill trees and meta-gaming. That's right - a f*cking ROLE-PLAYING GAME opted to add branching skill trees to every class so everyone can have "badass" spells, but opted to skimp on the central rules concerning CHARACTER MOTIVATION.

Probably the most anticipated release for D&D 4th Edition since Martial Power, Player's Handbook 2 introduces 5 new races and 8 new classes, as well as new feats, new rituals and other stuff of that nature. The addition of a few updated favorites (Barbarian, Druid, Gnome, Half-Orc, Bard, Sorcerer), a few more recent races (Goliath, Shifter) and some new ideas or radically revised and renamed older ones (Deva, Avenger, Invoker, Warden, Shaman) makes for a really good mix. As an Eberron GM, I was particularly glad to see the Bard and the Shifter make their return, but I was surprised to find that my favorites, the ones that I really want to try out, are new or unfamiliar roles, like the new Primal and Divine classes and the Goliath and Deva races.

While I enjoyed reading this, and am playing D&D for the first time right now having never played any other edition so I don't have any previous edition experience to compare it to, come on.