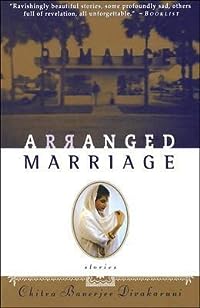 From the story of a young bride whose fairy-tale vision of California is shattered when her husband is murdered and she must face the future on her own, to a proud middle-aged divorced woman determined to succeed in San Francisco, Divakaruni's award-winning poetry fuses here with prose for the first time to create eleven devastating portraits of women on the verge of an unforgettable transformation.

The collection starts with Bats; this story attempts to de-mystify the universal question of why women continue to live in bad marriages (or situations). The question, however, is left hanging when the story ends with an image of the narrator and her mother running away once more, wounded and frantic, to escape her abusive father. It also provides context for stories that follow, the reader understands the significance of a female protagonists fighting against cultural norms like Abha does in Affair. Through the use of simple prose she sets up complicated situations that force the reader to question his/her beliefs about arranged marriages and Indian women. The question of why Indian women continue to live in bad marriages is not completely answered by the end of the book.

We regularly tend to assume that times have changed for women in India and we are making progress. For most of the small town and rural women (which is where most people still live in India), the tyranny of a life bound by the constraints placed by the males around them is real and exists. Since the book is a collection of stories, it is definitely an easy read. The stories are based in the San Francisco Bay Area and this makes it even more closer to my heart. However it is worth reading for every ignorant Indian man living the blubber of his self-created chauvanism.

"Clothes" tells the story of Sumita, a young woman whose marriage to an Indian man in America has been arranged. She travels to the United States, and discovers a whole new way of life when her husband dies and she faces the decision of staying in America or going back to India to live with her in-laws. Another moving story in the book is "The Ultrasound," in which a young woman in India is forced to have an abortion because an ultrasound indicates that her first-born child will be a daughter.

Arranged Marriage: Stories by Chitra Banerjee Divakaruni Sometimes it so happens that when you read too many books from the same author, you begin to easily feel too comfortable with the theme and you can end up even predicting the end and can easily sniff what is happening after having just read a few pages. After having read atleast four books prior to reading Arranged Marriage, I was not quite impressed with the theme and emotions as there was nothing new and fresh and it was the same glorified versions of tyrannical husbands holding captive of women, women trying hard to struggle after having left India as immigrants, women confined to the kitchen trying to bail out Indian curries reminiscing their hay days when they would have delicious Indian cuisine at their hometown Calcutta. I badly need to read something different from authors like Chitra Banerjee Divakaruni, Amulya Malladi and Jhumpa Lahiri.

The women in these stories struggle to find their place, sometimes suffering great loss while breaking free from the restraints of centuries of tradition.

The only other short story collection about Indians I've read before was Interpreter of Maladies , and while the stories are more varied in topic, they're not as consistently affecting; I saw myself so much more in Arranged Marriage, despite the fact that the main characters were almost always women (the heartbreaking first story, "The Bats," stars a child, and the Gone Girl-esque "The Disappearance" focuses on the husband). I must admit that the dominant theme became wearying, however, in that in nearly every story, the husband was kind of a dick, leading to an unhappy marriage full of regret.

Divakaruni's writing is more literal, as if she is reciting stories to an audience. I'm not saying one is better than the other; certainly though I've been 'trained' to read (rather than listen) in a particular way, so that it's easy for me to say that I find something absent in Divakaruni's stories.

Divakaruni also writes for children and young adults.Her novels One Amazing Thing, Oleander Girl, Sister of My Heart and Palace of Illusions are currently in the process of being made into movies. http://www.chitradivakaruni.com/books.... She now lives in Texas, which has found its way into her upcoming book, Before We Visit the Goddess. She is also closely involved with Pratham, an organization that helps educate children (especially those living in urban slums) in India. For more information about her books, please visit http://www.chitradivakaruni.com/, where you can also sign up for her newsletter.