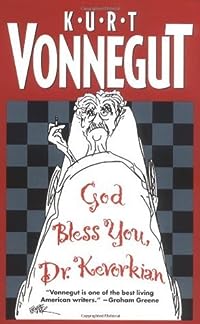 In God B You, Dr. Kevorkian, Vonnegut skips back and forth between life and the Afterlife as if the difference between them were rather slight.

In thirty odd "interviews," Vonnegut trips down "the blue tunnel to the pearly gates" in the guise of a roving reporter for public radio, conducting interviews: with Salvatore Biagini, a retired construction worker who died of a heart attack while rescuing his schnauzer from a pit bull, with John Brown, still smoldering 140 years after his death by hanging, with William Shakespeare, who rubs Vonnegut the wrong way, and with socialist and labor leader Eugene Victor Debs, one of Vonnegut's personal heroes.What began as a series of ninety-second radio interludes for WNYC, New York City's public radio station, evolved into this provocative collection of musings about who and what we live for, and how much it all matters in the end.

There is no Hell, and those in Heaven are still much as they were on Earth: Ray, still a Ray-cist whose afterlife is haunted with the notion that his bullet was the catalyst which immortalized MLK's words; Hitler, still a fame-whore desirous of a monument at the UN headquarters in NYC which simply states "I Beg Your Pardon"; Shakespeare, an elusive, pompous dandy who answers all interview questions solely with direct quotes from his numerous plays before finally breaking off the interview with a dismissive "Get thee to a nunnery!" One after another these people speak briefly with Vonnegut, from the first man to ever fly a hot-air balloon over the Alps to the first woman executed for murder in Texas in the 20th Century. While this is certainly not the most important work Vonnegut committed to print in his lifetime, I still found myself satisfied in the end if only for the fact that I agree with him on his overarching points: that the goal of life should not be avoiding punishment and pursuing reward based on scriptural anecdotes, but rather to be as good a person as you can be based on reasoned assessments of human nature and the world itself, to reject dogmatic notions of sin and and repentance out of fear of personal suffering in some scientifically-unfounded notion of an afterlife, and that Dr. Jack Kevorkian was a modern martyr for the cause of sorely lacking personal freedoms.

It's difficult, for me anyway, to read other authors who push the envelope of writing and flex their might prowess with prose, to return to my roots and read the plain-jane Vonnegut style and still enjoy it. He is a writer (of his own admission) that is great in ideas but weak in actual writing ability. V. puts emphasis on the ideas and structure of the story much more than he does of his writing. For me, the whole point of reading literature (what separates itself from any other medium of story-telling) are the things that writing can do in and of itself, hence my proclivity for post-modernism (that puts writing itself as the main focus of its story-telling aim) and prose that is effected poetically in some way, shape or form, Nabokov, Woolf, etc. Not all of this applies to Vonnegut however, because he has quite a few tricks up his sleeve (more than the other minimalist writers that use such style of stripped-down prose). Despite being a proclaimed atheist and humanist, Vonnegut (the author and the narrative persona) writes a story about heaven and everyone inside it.

A bit anti-war at times, yet always himself, Vonnegut doesn't touch any new territory with this short work than he already has, but entertains and makes us crack a smile at random thoughts...

Still, this is Kurt Vonnegut were talking here, and I say these words in comparing him only to himself.

He attended Cornell University from 1941 to 1943, where he wrote a column for the student newspaper, the Cornell Daily Sun. Vonnegut trained as a chemist and worked as a journalist before joining the U.S. Army and serving in World War II. After the war, he attended University of Chicago as a graduate student in anthropology and also worked as a police reporter at the City News Bureau of Chicago.