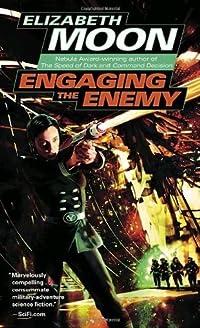 In the wake of a series of assassinations that have left her parents dead and their shipping empire in ruins, Kylara Vatta, the unorthodox renegade heir to Vatta Transport, Ltd., one of the galaxy's wealthiest merchant houses, sets out to avenge their death.

I WILL MAKE A FEW COMMENTS ABOUT THE BOOK BUT THE RATING IS ABOUT THIS AUDIO VERSION. HOWEVER I got the audio version of this book and I've got to say...the reader drove me completely away. I mean the reader here seems to think that...the-way-to-sound-dramatic-is-to-pause-between-each-word or two.

Engaging the Enemy is even longer than either of the first two Vatta books: 15 and 1/2 hours, and still filled with wonderful adventures and personalities, narrated wonderfully by Cynthia Holloway.

This here be a combined review of the second and third books of the Vatta's War series. While I try to post no spoilers, if ye havent read the first book and ye keep reading this log then ye have been forewarned and continue at yer own peril . Well book one could have been a standalone but I am extremely glad it wasn't! Side note: Much thanks to me matey, Sarah @ brainfluff, for pointing me in the right direction in terms of the recommended readin' sequence for these books!

Kylara Vatta has finally made it to Lastaway, safely delivered her original cargo, and is on her way to her next trading port when she suddenly finds herself in charge of much more than the command of Fair Kaleen and her crew. Shes independent and pragmatic, nothing at all like Stella; the contrast (both physical and personality-wise) between the two makes for an interesting dynamic which Moon does not fail to take advantage of. Although I did feel Stellas characterization was a bit different from how she acted in Marque and Reprisal. This woman was not the same Stella present in Engaging the Enemy. Engaging the Enemy has the misfortune to be the middle novel in a five book series. Of course, the middle book also holds great potential, especially in its position to entertain us when the adrenaline has begun to seep out of the protagonists system and the end is still too far away to reach in a day, but close enough to see. With a series of five books, the middle can so easily plateau with action. Engaging the Enemy felt a little like that for me, much to my disappointment. Kylara may be the captain of a trading vessel, she may be acting as a privateer to reestablish Vatta Transport, Ltd, but I wasnt as engaged in the narrative as much when I was drawn through the dull routine of Vattas world. I just wish most of the action in Engaging the Enemy wasnt confined to the last 50 pages, especially when the rest of the book didnt encourage it. There was more suspicion and mystery here, more revelatory plot information thats extremely relevant to the series as whole, but not too conducive to the type of heart-pounding excitement of the first two books.

Vattas War is just such a fun and compelling space opera with a strong central character, and Elizabeth Moon is a great storyteller. I say this while simultaneously admitting that, even though I really, really enjoyed reading Engaging the Enemy, I dont think its actually all that good of a book. (Spoilers for previous books but not this one.) Engaging the Enemy opens with Kylara and Stella Vatta plotting their next move. Leaving Stella in command of the Gary Tobai, Ky departs for a system that is more likely to recognize her prize claim to the Fair Kaleen, which she wrested from her pirate uncle in the previous book. On balance, though, I have to admit that there is little of note about this third book in the series. Its existence makes total sense, but the way Moon has written it makes it sound so contrived and really doesnt do justice to Stella. Yet Moon essentially hands Stella the Idiot Ball to drum up enough tension while trying to get us to doubt whether Ky is even actually Ky. So, yeah, I cant pretend that this book is a masterpiece of plotting, conflict, and characterization.

Similarly everyone continually having concerns but delaying communicating them with others is getting too obvious as a plot device, too.

In the middle of the series, this book here, Ky actually literally drooled over a gorgeous woman who boarded her ship - but alas, no, this isn't, way down in book three, the start of a romance; or lesbian fiction. (view spoiler)that's one of the problems with the series - by book five Ky's occasionally, when she is actually in control of the POV, lusting after Rafe - who is also lusting after her; it's a bloody romance trope of 'but I can't have her/him because . course that came up like three times in book 5, it's not actually a major plotline, yet, though it certain removes asexual from the mix (she still might be demisexual), though still leaving the possibility of being biromantic (hey, she did drool over that gorgeous woman in this book three here) (hide spoiler)

Elizabeth Moon was born March 7, 1945, and grew up in McAllen, Texas, graduating from McAllen High School in 1963. She started writing stories and poems as a small child; attempted first book (an illustrated biography of the family dog) at age six.