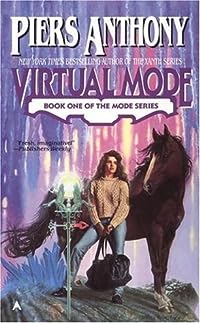 Darius tells her he has traveled from "his reality" to find her.

In proving to Colene that other worlds do exist, he uses up the power of the artifact that would allow them to travel back to his universe.They must try a slower, more dangerous method: the creation of a four-dimensional universe.

So Colene meets this dude, Darius, from an alternate reality, which are called modes, who is much too old for her but since she has a nice body they fall in love. The grand poo-bah of his society is the dude with the best magic power to multiply emotions, and he goes around the kingdom multiplying joy for his people. It is explicitly said that women can't be grand poo-bah JUST BECAUSE come on ladies...and nowhere is it said that the person being sapped of their emotions must be female but it always is. OK, so Darius doesn't like this deal and he goes traipsing through the modes to find a lady from another universe that maybe won't be depleted by his job so he doesn't have to ruin people's lives, how nice! There's a messed up scene though where he has to go to an old poo-bah to ask about taking his spot while he's off in the modes, and the guy condescends like crazy to his "love-wife" and they both basically treat her like she's an idiot, all "she doesn't know what she wants, we'll teach her, it'll be a sad lesson, but as men she must know to listen to us because we are right alll the time". There's a lot of stuff that Colene thinks about everything that could potentially be explained by the fact that she's a 14 year old girl who lives in a sexist society, but Piers Anthony is not that good a writer and I've read enough of his other books to know that all this disordered thinking comes from his brain. She has some damaging thoughts about her own gang rape: "I was so drunk I may have even thought it was fun at the time." This would be a good point to address the fact that victim blaming is rampant in our society, and that many victims begin to internalize the idea that maybe it was kind of their fault if they were drunk, but none of this is addressed at all. Piers is DEFINITELY not nuanced enough to show that while his character maybe believe something like that, it is wrong and a symptom of societal problems with how we react to assault victims and gender roles. "It sure taught me to be wary of liquor and of men!" Here's another overwhelming theme of Piers Anthony books: all men are always thinking about sex and are all potentially driven out of control by a lady's body. Later on in the book, there are some female slaves - bred to serve, basically - who are defined by their sex and what they can provide with their bodies. Let us move on to the other most major female character in the book. "I was attracted to her not for her beauty or personality, for she was not remarkable in these respects..." She is introduced as not being very good-looking, and for the rest of her time in this book, they will not shut up about what she looks like. Don't worry, Darius, true to form as a man, WILL NOT STOP TELLING US WHAT HE THINKS OF PRIMA'S BODY. It was a good one, considering her age...he saw that she was lean, rather than plump, but her posterior was well rounded and her breasts were of adequate mass...in the appropriate apparel her body would be attractive enough...she was older than he, and not beautiful (thought not ugly), but she had a good mind to go with her excellent power..." I get the impression that Piers thinks he's doing something good by mentioning her great magical power and intelligence every time he mentions her looks - we may be obsessed with what she looks like, because she's a woman so OBVIOUSLY, but she's also a woman who is smart! Can maybe not every character be constantly thinking about women's bodies? So probably if I'd read this as a 14 year old I would have been really into it, but as an adult I recognize that Piers Anthony is a sexist dude who will not stop writing female characters even though he's sooo baaaad at it.

Piers Anthony prefers to call Virtual Mode imaginative fiction. Virtual Mode, named after a means of accessing all the memory in a computer, is the first installment in a series of novels that seem like a hybrid between fantasy and science-fiction. The multi-dimensionality of this series has a feeling of soft science-fiction, but the working out of the plot is more like a pairing of fantasy and romance novel. The worlds and life-forms, such as those in Anthonys marvelous trilogy Of Man and Manta (Omnivore, Orn, and OX where life forms from cellular automata and phytoplankton through manta ray-like creatures and humans find conceptual life), have a nice variety and intriguing settings/problems. Although I originally thought the travel through these alternate realities was going to be like a sci-fi, fantasy buddy movie, I was pleasantly surprised to see challenging quests and puzzles for both of the co-equal protagonists. Colene, typical to Anthonys most successful work, is a punster.

And I like Piers Anthony's books. It's obvious that this is the case not just because the cover says "Book one of the Mode series" but because when you get to the last page, you're stuck at the beginning of a new adventure. The only thing left to do is pick up the next book to find out what on Earth just happened and how it's all going to turn out. The concept of the story was new to me, which was something that kept me interested.

There is always something completely ridiculous going on that I probably wouldn't be able to read with a straight face even if I was trying to take the book seriously. Call them up and read them a few paragraphs with no warning.

The concept of parallel realities is interesting and somewhat original, but the story is tedious and repetitive with largely unbelievable characters. The story itself is repetitive and tedious - how many times does it have to explain that she is depressed. Maybe I don't like quitting.

Piers Anthony is a very personal author and it shows in his straight non-story writing. It seems as if every character may engage in sexual activity at any moment. Describing the sexual hunger of a 14 year old is not something that anyone should really want to put in their minds, especially kids that age.

Read this book if you have even a slight interest in science or just enjoy a fantasy novel with a twist!

Though he spent the first four years of his life in England, Piers never returned to live in his country of birth after moving to Spain and immigrated to America at age six.