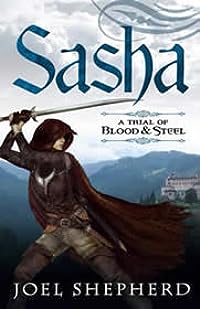 Sasha turns her back on her regal heritage, forsakes the life she could have as the princess in a rich kingdom, and trains instead to be a powerful warrior, fighting for the good of the people her father commands.

Sasha is a princess, the like of which the highland country of Lenayin has never seen before.

Spurning her royal heritage to be raised by the great warrior, Kessligh, her exquisite swordplay astonishes all who witness it.

Lenayin is a land almost divided by its two faiths: the Verenthane of the ruling classes and the pagan Goeren-yai, amongst whom Sasha now lives.

The Goeren-yai worship swordplay and honour and begin to see Sasha as the great spiritthe Synnichwho will unite them.

When the Udalyn peoplethe symbol of Goeren-yai pride and courageare attacked, Sasha will face her moment of testing.

My rating for this book changed a couple of time as I was reading it...why? The book takes place (basically) in Lenayin...or among its provinces. The people who are of the old religion are mostly the commoners(now) so the "royalty" is actively seeking to convert them in the time honored way of the fanatics of many religions...sword point or sword edge or possibly fire, etc. I looked up and read an interview with Mr. Shepherd and he goes on about how the world and it's politics are far more complicated than we find in most fantasy stories, even taking what I thought was a veiled swipe at Tolkien's worlds...I mean okay come-on. (This is an update, there are now 4 books) Please not another Wheel of Time! So far I intend to order or obtain the next 2 books (the third one is due out this fall-this is an update. I mean it's not like I don't have other books to read. :) Update 2: I have purchased the books...have not yet read beyond this volume however. "So many books so little time" as it goes.

What I love about this story is that although we do get a fair few fantasy 'tropes' being pandered to e.g. two rival religions and forces, a looming war, a chosen one, an heir killed off and a kind of useless king - We also have an amazing and wonderful female lead character who really does a lot to subvert all the damsel in distress tropes and promote ladies taking more of a leading and exciting role. I feel as though the plot was fairly standard for an adult fantasy, but the characters and the division of the two ways of life and religions/regions really helped to elevate this to a really exciting and intriguing story.

The fight scenes are hard to follow, and I mentioned the dumps of information about peoples, politics, and history.

Sasha is the first volume in A TRIAL OF BLOOD AND STEEL, a projected 4-book fantasy series by Australian author Joel Shepherd, who previously also published a science fiction trilogy called the CASSANDRA KRESNOV series. The Verenthane belief more closely resembles a traditional organized religion and counts the vast majority of Lenayin's nobility amongst its followers. When the sole remaining Goeren-yai High Lord kills a neighboring province's Verenthane leader, a complex conflict begins that threatens to tear apart the fragile balance keeping Lenayin together. Complex as all of this may sound, it's only a very crude sketch of the intricate and frankly huge fantasy world Joel Shepherd has created in A TRIAL OF BLOOD AND STEEL. Aside from that minor point, I thought Sasha was excellent, especially given that this is Joel Shepherd's first fantasy novel.

This book was recommended to me after I read The Warrior's Path. I am not a fan of "middle earth" style books with strange names and odd geography, and this story suffered a little of that, but the plot and the characters were well drawn (except when there were many people in the same room - I got confused).

Since there are three other books to come, and Shepherds intricate plots depend as much on political and economic issues as on interpersonal relationships, it takes him a while to set the scene.

First, nearly all the names and made-up terms had Y as the main (or only) vowel, which made them all look exactly the same to me.

*twitch* Regardless, I read through the book rather quickly and am looking forward to the sequel(s), as I've developed a strong cathartic relationship with the characters. All must be gleaned from reading through the story, which is not a bad thing, but it does get rather frustrating at times.