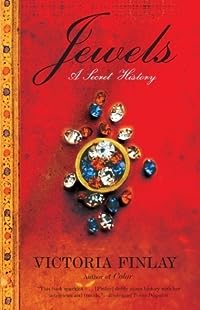 She risks confronting scorpions to crawl through Cleopatras long-deserted emerald mines, tries her hand at gem cutting in the dusty Sri Lankan city where Marco Polo bartered for sapphires, and investigates a rumor that fifty years ago most of the worlds amber was mined by prisoners in a Soviet gulag.Jewels is a unique and often exhilarating voyage through history, across cultures, deep into the earths mantle, and up to the glittering heights of fame, power, and wealth.

From the fabled curse of the Hope Diamond, to the disturbing truths about how pearls are cultured, to the peasants who were once executed for carrying amber to the centuries-old quest by magicians and scientists to make a perfect diamond, Jewels tells dazzling stories with a wonderment and brilliance truly worthy of its subjects.From the Hardcover edition.

"In the course of my research I found that although, of course, some rare stones have amazing and frightening dynastic tales, every jewel, however small or flawed, has its story: about the earth that was excavated to retrieve it, the families who depended on it, the people who designed the cutting method, those who bought or were given it, and the meanings and properties attributed to it. Victoria Finlay understands this, and she approaches her history of gemstones from this direction - instead of being just a clinical, straightforward history of where and how certain gems are mined and cut, she's using this book to examine peoples' relationship with jewels, and trying to understand why they mean so much to us. Finlay's book uses Moh's Scale of Relative Hardness as an outline - the book has nine chapters, featuring jewels from softest to hardest: amber, jet, pearl, opal, peridot, emerald, sapphire, ruby, and diamond. The best aspect of the book is the way Finlay (a journalist) goes all-out in her research. And finally, I loved this chapter because it taught me that there's a company that can create lab diamonds from human ashes.

A chapter per jewel, arranged according to their 'relative hardness' on Moh's Scale: Amber, Jet, Pearl, Opal, Peridot, Emerald, Sapphire, Ruby, Diamond. Each chapter explores the jewels origins, history, legends and superstitions, uses, and usually some sort of quirky story or fact. Small details like the chapter numbers being the value of 'hardness' on Moh's Scale, and the thorough research into how the gems are created. The diamond chapter also exposes the fact that De Beers basically owns all the stock of diamonds, and artificially controls the release of them onto the market to maintain the high prices.

But during one summer, I started accompanying my mother on her trips with my aunt while they went jewelry shopping, and that was when I - and they - realized that I had a real knack for figuring out real stones from fake ones. Finlay is not a new writer to me: I read her first book Color: A Natural History of the Palette sometime last year, and while I enjoyed it, I thought it was rather uneven in its storytelling, and thought that while some chapters were interesting, others were not entirely compelling. In Color, Finlay used the painter's palette as an organizational tool, and takes a similar tack in Jewels, choosing to use the Mohs scale as a guide in selecting the gemstones she tackles. Finlay also does a fine job interweaving legends, superstition, history and the present of each individual stone, often traveling to their traditional sources (and sometime to new ones) in order to get a behind-the-scenes look at the industry of each individual stone. But then Finlay raises an interesting question: given the problems inherent in acquiring natural stones (environmental pressures, severely underpaid workers who are constantly in danger, financing foreign wars and terrorism in the case of blood diamonds), should it not stand to reason that conscientious buyers and jewelers would choose lab-created stones? And yet, as Finlay explains, the jewelry industry itself does not want to use artificial stones; it wants to keep on using natural stones because they have the prestige of not being "mass-produced" - and they are very good at making sure that buyers continue to believe that natural is better than artificial, when there is really very little visible difference. Also, most of the time it's impossible to tell a natural stone from a lab-created one on the surface, and in the end that's all that really matters to buyers: how pretty the stone looks. Finlay's narrative style has significantly improved from her style in Color, and this shows in the way she tells the stories of the jewels themselves, turning each into a character in its own right: neither one more important than its fellow, but always with a unique quality inherent to itself that she brings out in the text. Although this will immediately appeal to jewelry fanatics and amateur mineralogists, Finlay's insight into the gemstone industry itself is something that any reader will appreciate and hopefully look into more deeply.

Structurally, the book begins with gems that are formed by or within living matter. Like her previous book "Colour," we also get to understand the cultural significance of certain colors and the powers associated with the gems.

She discusses the geological origin, cultural history, historical symbolism and economics of each stone, but in a way that's entirely conversational and engaging. I would recommend this book to anyone who's even slightly interested in gems or geology, who likes wearing jewelry or knows someone who does, or is interested in the cultural and historical symbolism of these charismatic stones.

Another well researched book by Victoria Finlay. This isn't an easy book to read, but Finlay is a very good writer and makes her subject both informative and entertaining.

The histrionic and social ramifications of our fascination for these useless rocks ("You can't eat them, you can't read them, you can't shelter under them ..." she quotes her Burmese taxi driver as saying) are on display here, as colorful and surprising as any of the gems themselves.