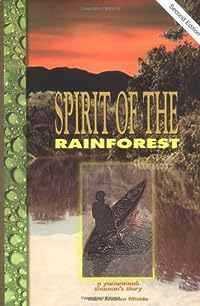 Spirit of the Rainforest

The Yanamamo of the Amazon -- endangered children of nature or indigenous warmongers on the verge of destroying themselves?

Now for the first time, a powerful Yanomamo shaman speaks for his people.

Read the Book "Spirit of the Rainforest" Online

A CROSS-CULTURAL CRITICAL REVIEW OF SPIRIT OF THE RAINFOREST Summation and Content The broken heart of a Yanomamö shaman expresses the story of his people in this vivid account of an Amazonian tribe and their passage through the spirit world to meet the great creator Spirit. The story gives a glimpse into Yanomamö wars, the shamans interactions with their spirits, and the journey of a few Yanomami who have found forgiveness and life. Narratives of the Yanomamö people have been told many times by missionaries, anthropologists and other interested parties, but Mark Ritchie offers a perspective in Spirit of the Rainforest that differs from most of his predecessors. But the spirits tell split truths and only lead the people to longer wars, increased suffering, and greater fear. Jungleman also gives a Yanomamö perspective toward the nabas who arrived in the rainforest in the 1950s and of their continued interaction over the next few decades. Spirit of the Rainforest reveals the battle between the spirits of the shamans and Yai Pada, the great creator Spirit. Jungleman describes the inner struggle he and other shamans faced as his spirits urged him to live a life of vengeance, rape, and taking hallucinogenics (to induce trances); on the other hand, Yai Pada offered a different life that rejected their old ways and offered what the nabas call forgiveness, a concept for which the Yanomamö had no word. While Junglemans account conveyed through Ritchie is more subjective and comes from one individual, his account comes from an insider, one who has lived his entire life knowing the turmoils of the rainforest and its spirits. Junglemans perspective clearly takes into account the reality of spirit beings who are at war with our Creator and with us. Western culture has grounded itself in naturalistic thought and thus rebuffs the reality of angels, a world of spirits, and God. Too often, the Christian community succumbs to this worldview and loses sight of the war that it is within, a war against spiritual forces of wickedness in the heavenly places. Both, the Yanomamö culture that Jungleman and Shoefoot lived within and the western culture that surrounds the church existing within it, have glorified sin. Yet both the Yanomamö and westerners are ensnared in their sin and serve (whether they are aware of them or not) the spirits of a heavenly realm that are involved in a battle that began ages ago when the Creator spirit was rebelled against. To communicate a basic Christian understanding of the spirit world, humanity, and sin to the Yanomamö, the western believer must begin with a transparent life in the presence of the people. As Yanomamö language and culture are learned by the westerner and as the Yanomamö have opportunity to see the believers Christian life in action, one can then begin to present the truth about the spirit world. The Yanomamö have a firm grasp on the existence of the spirit world, but the spirits they serve are truly demonic and are at war with the God of Christianity. As this Christian understanding of sin is communicated, of even greater importance is the place of Jesus Christ in the message. It was those spirits who then led the nabas and the Yanomamö alike to rebel against Yai Pada. Shoefoots description of faith seems to be well contextualized and clearly communicates the response required of every man, Yai Pada is the friend of any Yanomamö who hangs his desires on him. It is when a Yanomamö man or woman does this that Yai Padas anger goes away and he will show that person what it really means to be human. They will be able to describe it in words that a westerner could not and will be living demonstrations of their Creators work in the life of one of their own people. The truth about the spirit world, humanity, and sin must be communicated clearly so that the Yanomamö people may know their Creator and experience this life with him.

On the other hand, this book is a no bones description of the days in the lives of the fierce Yanomamo Indians living in the deep jungle of southern Venezuelans Amazon basin; how they exist, think, and behave, told by a shaman. The shamans perspectives here begin to recognize Yai Pada as not an enemy, after all, but the one Great Spirit, greatest of all, the Creator, God, who is the real source of love and peace.

Powerful in terms of his experiences with the spiritual world and the battle that he has witnessed there between the evil spirits he's known well and whom have ruled his people for so long and the Spirit of God that he comes to know and love.

Of course, as readers, we're at the mercy of the authenticity of authors, but after being exposed to multiple credible sources from which these same stories came, I fully believe this tale to be true.

Favorite quote: "We want people who will really care about us, like the man who came into my village and put his arm around me when I was covered with dirt, sweat, saliva, and mucous.

This is cross-cultural reporting at its finest, and it's VERY hard to read. But it's only too obvious that most of the haters here can't see the Yanomamo as *people* with their own aspirations, opinions, and hopes.

But I do recommend this book.

There is a spiritual warfare between demons fighting for the souls of man, desiring to see corruption, hatred, and war and the tremendously indescribable Grace, Light, Goodness, and Love of the Lord God Almighty and His Son, Jesus Christ, who provided the way for us to spend eternity with Him in Heaven. Shoefoot, a Yanomamo shaman, clearly understood the need to get rid of ALL his spirits to follow Yai Pada, The Great Spirit. He was able to see how some Western Christians followed Yai Pada, but did not get rid of ALL their spirits. If these make you too squeamish or if you are convicted as a Christian that there is a better way to tell of these truths, then please do not read this book. However, if you are able to accept looking at the gorey details of sin and then being moved in soul and spirit when you see the Triumph of God Almighty, then read this book!

In fact, one of the main characters in the story is the anthropologist Napoleon Chagnon who wrote the most well-read anthropology book of all time about the Yanomamo. This book shows you what the Yanomamo think about all sides - it identifies the hypocrisy of some missionaries, the cultural bias of the anthropologists, and the caught-between cultures Yanomamo, who neither want to give up their identity or be forced to remain in what they consider to be lives filled with suffering.

But they were not told that this spirit had been used by these white men to control and manipulate entire populations of people against their will, that this spirits name was linked to more wars and deaths than they could ever know. These men came into their world, raped and mistreated them, told them they were no good unless they followed their god.