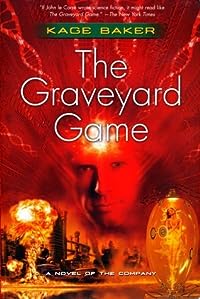 Mendoza is a Preserver for The Dr. Zeus Company, living in the past to collect species for the future.

But when she kills six people in California in 1863, The Company makes her disappear.Joseph, a senior Preserver, loves Mendoza as the daughter he never had.

As one character tells him: "We've known each other a long time, and I mean it as a compliment when I say you're the most Company man I've ever seen. More than any other, this book questions the mission of the Company, and the fate of its faithful servants: "We're all of us angry when we come into this immortal life; keeps us motivated to fight for humanity against evil. As was foreshadowed in the previous books, in Bakers future, humanity has become simple to the point of infantility. I dont believe in a future where meat, alcohol, and all stimulants such as coffee are outlawed with no new indulgence to replace them. And while the targets of our intolerance, violence, and acceptance may change, I think human nature remains the same.

This book is definitely the linchpin in the series.

This volume focuses on Joseph (Sky Coyote) and Lewis, the literature preserver, and one of my favorite characters. It is, much more, an opportunity to show more sides to Joseph and Lewis.

Beginning in 1996, Joseph and Lewis spend their spare time, over a couple of centuries, trying to find out how the Company disposed of that tragic figure, Mendoza, after her 19th century breakdown. The first half of this book was a lot of fun.

Amazon.com Review "Sin exists," says Joseph, an immortal cyborg agent employed by Dr. Zeus, Inc., and in this fourth novel of Kage Baker's Company series, it certainly does. The Graveyard Game follows agents Joseph and Lewis as they try to find their missing friend Mendoza, who's been exiled to the Back Way Back as punishment for anti-Company activities. Dr. Zeus, a time-travel corporation, created cyborgs to selectively preserve artifacts from the past for the edification of the 24th century, when the Company exists. --Therese Littleton From Publishers Weekly This entertaining romp, the fourth in Baker's the Company series, continues the excellent premise: time traveling, immortal cyborgs who were recruited in the past as mortal children seek to enrich Dr. Zeus's Company by rescuing artifacts, artworks, information, endangered species and more. Rumors about their future have abounded for centuries, and now the natty Literature Specialist Lewis and Facilitator Joseph, born in the Neolithic era, are searching for the truth, as well as for their missing friend, the Botanist Mendoza, who has disappeared, perhaps sent hundreds of thousands of years into the past, following her travails in the third book in the series, Mendoza in Hollywood. She is best known for her "Company" series of historical time travel science fiction. Other notable works include Mendoza in Hollywood (novel, 2000) and "The Empress of Mars" (novella, 2003), which won the Theodore Sturgeon Award and was nominated for a Hugo Award.

To creat agents for itself, it takes children of a part time period and turns them into immortal cyborgs, who work for them on missions such as saving 'lost' artworks and extinct species, hiding them safely so that they can be 'rediscovered' in the 24th century. What will happen when the agent finally 'get' to that century? And whatever happened to the 'old' style of Company agent - the 'Enforcers.' They were supposedly immortal as well - yet they seem to be gone.

I tend to skip my way through the Company books (some just too dark for a reread), but this one is well worth rereading and I recommend it to you. Maybe next time.) But once again, I realize how much I love modern technology in combination with a good and smart book/author. Cover art: Very nice but I wish the artist had used several models. Plus, it's really nice to catch up with favorite characters. (view spoiler)(Who all tend to realize herein that "all is NOT well".

Born June 10, 1952, in Hollywood, California, and grew up there and in Pismo Beach, present home. Rapier wit developed as defense mechanism to deflect rage of larger and more powerful children who took offense at abrasive, condescending and arrogant personality in a sickly eight-year-old.