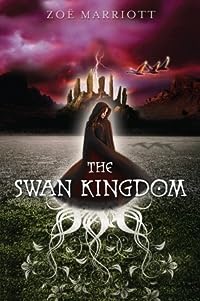 In a terrifying moment, all Alexandra knows disappears, including her beloved brothers, leaving her banished to a barren land unlike her own.

Alexandra has more gifts than even she realizes as she is confronted with magic, murder, and the strongest of evil forces.

This new voice in fantasy weaves a tale rich in visual detail, peppered with a formidable destructive force, and sweetened with familial and romantic love.

This book gets off on the wrong foot and never quite recovers. The ugly one only gets in the way. She is as out of place as a sparrow in a clutch of swans." From those opening lines, I expected to hear more about what made her the ugly, unwanted, talentless child. I could not be married off to his advantage, for who would want to wed a creature so plain?" Okay, at this point, I'm getting ready to hear about how she has a hunchback, warts on her face, eyes that are crooked or far too small, or something. But there, I'm afraid, my resemblance to Robin or my mother ended." Here comes . You have a small white face with delicate features and that makes you so ugly you couldn't ever possibly be married off, despite being a king's daughter! This main character isn't ugly. Poor little "ugly" thing. So, by the end of the first six pages of the book, I felt let down by the author. I tried to give the book a decent shot and read to the end. I think this was an effort to make the dialogue seem "real." But instead, it keeps the reader from feeling like the characters are connected at all. The ending of the book falls flat, almost feels like it wasn't fully written.

Despite its flaws, I really enjoyed this book. -Likeable and flawed MC: Alexandra is described as plain, ugly, and bland. Things seemed to be jumping all over the place.

Reviewed by Natalie Tsang for TeensReadToo.com As the brightly colored cover suggests, Zoë Marriott's novel THE SWAN KINGDOM is a fantastical read. Anyway, that's why I love retold fairy tales, because it's a way to enjoy certain stories that I seemed to grow out of. With books like THE SWAN KINGDOM, I get my dosage of magic, and from a girl normal enough to be friends with.

The Swan Kingdom was lyrical and enchanting and a fairy tale through and through, with all the signature elements such as evil stepmother, enchanted gardens, animal transformations, and a disgraced, unwanted princess-protagonist named Alexandra. - Alexandra isn't a pampered princess. - Zoe Marriott's writing verges more on the introspective side of the main character, which can make the book a little melodramatic. I feel like Marriott really wanted to bring across the point that her heroine was a typical ugly duckling but it was a little unnecessary.

Alexandra, the main character, has the gift to work with the power of the earth.

This isn't to say I didn't compare, because I definitely did,especially when it comes to the depth of the story (in which case I compared it to Marillier's DOTF and to Shadows on the Moon , another of Zoë's works.). I did wish for more struggle and lengthening of the tale; there's a certain ease with which everything happens, from the relationship with the romantic interest to Alex's struggles and ultimate awareness of herself, that ended up being the key reason I found myself compelled to compare- both to how Marillier layerd Daughter of the Forest, but also to how Marriott herself created this complex, painful struggle in Shadows on the Moon. Again, I know I always say I try not to read reviews of things before I write my own, but as I did with Strands of Bronze and Gold, I just couldn't resist seeing what a friend (who had also read Daughter of the Forest and Shadows on the Moon)had to say about this one.

Well, I at least knew it was a fairy tale retelling and I love those, so I couldn't pass this one up. The beginning of the book was so melodramatic and filled with lots of; my father hates me, I'm not beautiful (which is totally incorrect because the only ugly thing about her is that she's pale and has red hair. The first part was so slow and the chapters are pretty long for a ya book that the pace of this story just dragged on and on and on. There was a lot more action that left cliffhanger chapter ends so I just couldn't stop.

I've known that I wanted to be a writer since I finished reading my first book; 'The Magic Faraway Tree' by Enid Blyton.