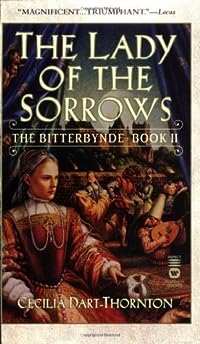 The Lady of the Sorrows

Returning to the magical Bitterbynde world, the maiden Rohain is no longer deformed or mute. Yet her dreams of happiness are short-lived when the Unseelie hordes declare war on humankind--and Rohain is the real target of the Wild Hunt. Original.

Read the Book "The Lady of the Sorrows" Online

I was already impressed with the first volume, but Thornton, takes us into a completely different context and setting in her second book, and manages to keep the same level of complexity and atmosphere. I actually think this book was more of a challenge to create the atmosphere.

The plot's not bad, as such (actually I was pleasantly surprised), and neither are the characters - though why do people always become boring as soon as they find beauty and wealth?

maybe it was just me; at the moment, patience isn't my best thing. maybe it's because the heroine isn't very interesting at this point. valid, but it's better if the author actually intended that to happen, and see, i just don't think she did, which means she lost control. but i'm provisionally concluding that for Rohain, penniless is better.g maybe it's because she managed to make Thomas the Rhymer boring. you get a story, lifted wholecloth out of a source. i usually recognize the sources, maybe that's the problem: i know how much heavy lifting she's really doing? but the trouble is, there's no narrative to speak of, so there's no point to the stories, pretty much, nothing to incorporate them into. - she's writing a simple romance in this trilogy, and all the stuff i think is neat about her work is really only meaningless filler?

Some quests and questions from the first book are resolved, and at the end of the book both the reader and the character finally has a complete understanding of the beginning of the trilogy.

I found myself skimming over whole paragraphs, just to get to the actual story.

It's like her writing suddenly got really bad, because I don't remember the first book being like this.

I read book 1 and was curious enough to start book 2 so I could find out who the main character was. Then to make things worse, one of the main characters begins speaking with Thee's and Thou's midway through the story.

There will be long, drawn out 20 page passages where she basically just retells a folk tale for the reader, without any of the book's characters participating, just listening to the tale be told, or she'll even pause the action entirely to give this as a 20 page aside. But, the tale was amazing, and she is perhaps the best author I've read at being able to make the world around you seem alive. There's apparently 2 metals in this world not in ours, sildron and allium. Despite what may sound like a few big flags and complaints on my end, I fully suggest everyone read it, if for nothing else than a look at a refreshing new fantasy world, and a completely different writing style than any I've ever come across before. I liked it enough to want to buy the rest of the trilogy Partly because of the novelty of her writing style, and partly because Book II (The Lady of the Sorrows) had a character named The Lady Dianella in it. The cool thing is, about 3/4 of the way through book 2 (The Lady of the Sorrows), some very cool plot developments arise that make you realize she probably planned out and wrote all three books before anyone even saw 1 page of them, and that they are very cooly thought out and planned. This is the first time I've skipped chunks of a book since I tried to read Dr. Zhivago entirely in 1 night, for a quiz the next morning. I mean, passages like, "the book of night opened across the sky, it's paragraphs written in constellations" can be very cool, but when that's the shortest, clearest, and most direct description of nightfall the woman can come up with (and believe me, there were many many more in the book, all of them long and pointless ways of saying "it was nighttime") - then there's an editor somewhere sound asleep at her desk, or just not showing up for work. In the paperback version I have of the third book (The Battle of Evernight), there is a one-page epilogue/Author's Note that says, in a nutshell, that when the first edition of the third book came out, no one could understand the ending.

Her books are published around the world and have been translated into several languages.