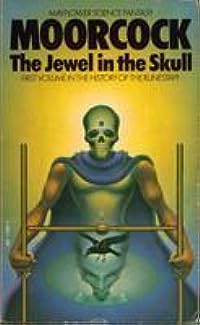 The Jewel in the Skull

In the far future, Hawkmoon is pulled unwillingly into a war that will eventually pit him against the ruth Baron Meliadus and the armies of the Dark Empire.

Antique cities, scientific sorcery, and crystalline machines serve as a backdrop to this high adventure.Dorian Hawkmoon, the last Duke of Koln, swore to destroy the Dark Empire of Granbretan.

Hawkmoon becomes a puppet co-opted by his arch nemesis to infiltrate the last stronghold of rebellion against Granbretan, the small but powerful city of Kamarang.

But in the city of Kamarang, Hawkmoon discovers the power inside him to overcome any control, and his vengeance against the Dark Empire is filled with an unrelenting fury.

Read the Book "The Jewel in the Skull" Online

It was probably 2 years later when I was back in a situation to have "ready access" to books stores. We think of hot and cold running water as a necessity of life, and we have access to bookstores in every neighborhood!

OVERALL FEELING: Evil Empire trying to take over an alternative European world; standard pulp swords and sorcery; easy read; somewhat good; few interesting points; some interesting characters; some are caricatures; flows well. MARKETING APPEAL: This story came about in the 60s, I believe, when pulp sci fi magazines were a big thing; I doubt it made a lot of money at first but the Eternal Champion, most notably Elric and Corum, were a popular series. SCORING: Superb (A), Excellent (A-), Very good (B+), Good (B) Fairly Good (B-) Above Average (C+), Mediocre (C ), Barely Passable (C-) Pretty Bad (D+), Dismal (D), Waste of Time (D-), Into the Trash (F) DIALOGUE: B STRUCTURE: B- HISTORY SETTING: C CHARACTERS: B EVIL SETUP/ANTAGONISTS: B- EMOTIONAL IMPACT: C+ SURPRISES: B- MONSTERS: B- PACING: B+ THE LITTLE THINGS: B OVERALL STYLE: B- FLOW OF WORDS: B CHOICE OF FOCUS: B- TRANSITIONS/FLASHBACKS/POV: B- COMPLEXITY OF WORDS/SYMBOLISM/THEMES: B- OVERALL GRADE: B- CONCEPT: The idea of a technologically mixed Eurpean area, which exists thousands of years into the future, is an interesting one. Overall, the dialogue flowed well and the characters sounded somewhat different. Of course, the pacing is so good b/c Moorcock doesn't give us a lot of details. Since RJ's WHEEL OF TIME series, the novels have shot up to 800 pages or so per book. THE LITTLE THINGS: Moorcock's division of the Evil Empire into jeweled masked faces in the shapes of different animals was interesting . COMMENTS: Apparently, Moorcock was never big on Tolkien so he took the opposite approach in his works; far darker; less details; more gore; not as happy.

Moorcock only wrote one "Eternal Champion" book. Kills/murders a butt-load of people in really horrid ways and with an arrogance that only the Eternal Champion could muster. Inadvertently/tragically kills himself/love interest.

It felt more like I was reading through a long summary of the story rather than the story itself; each element was introduced and then resolved without much emotion in the writing at all.

This short book was a prelude to the Runestaff series in which Dorian Hawkmoon plays a primary role as the displaced ruler of Koln.

The evil empire of the future Great Britain, with its beast-masks, vast military, flying machines, time palaces and crystal bridges is more of Moorcock's early proto-steampunk, and comes alive wonderfully in the mind's eye, as does the castle in the Camarg that stands against them.

Sent to betray Count Brass, Hawkmoon has a black jewel implanted in his skull by Granbretan alchemists. Exciting and atmospheric, The Jewel in the Skull is a fine introduction to Moorcock's first mature fantasy series.

Of course, Dorian Hawkmoon (the main character) still has to help her liberate her city from Granbretan and she offers to marry him after (but he's already betrothed).

Along with Julius Schwartz (as editor) and Gardner Fox (as writer) I cannot think of any other writer who has done so much to establish the concept of the multliverse as firmly in the fantasy/science fiction genre as Moorcock. By modern fantasy standards this is a brief read.

It's a great story of a hero (Hawkmoon) and his struggles against the Dark Empire.

As editor of the controversial British science fiction magazine New Worlds, from May 1964 until March 1971 and then again from 1976 to 1996, Moorcock fostered the development of the science fiction "New Wave" in the UK and indirectly in the United States. A spoof obituary of Colvin appeared in New Worlds #197 (January 1970), written by "William Barclay" (another Moorcock pseudonym).