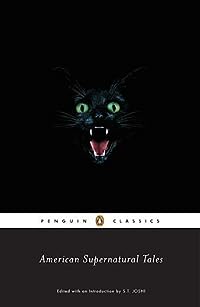 As Stephen King will attest , the popularity of the occult in American literature has only grown since the days of Edgar Allan Poe. American Supernatural Tales celebrates the richness of this tradition with chilling contributions from some of the nations brightest literary lights, including Poe himself, H. P. Lovecraft, Shirley Jackson, Ray Bradbury, Nathaniel Hawthorne, andof course Stephen King. By turns phantasmagoric, spectral, and demonic, this is a frighteningly good addition to Penguin Classics.

Civilization may or may not be in decline, but the supernatural tale certainly is.

American Supernatural Tales - a treasure for lovers of great literature of the dark weird variety. VASTARIEN In the very first short paragraph Thomas Ligotti establishes the atmosphere of dread so essential for a tale of the supernatural: "Within the blackness of his sleep a few lights began to glow like candles in a cloistered cell. And even if he found himself unable to fix his own location in this scene, he knew where his dreams had delivered him once more." The author's unique voice in writing his fiction is all about precision - subtle shades of character, nuanced images and foreshadowing, impeccable timing to build mystery, suspense, surprise and, of course, horror. I encourage you to hunt down this Penguin edition for Thomas Ligotti's onyx gem as well as the other tales included in this fine collection. Joshi, Born 1958 - American scholar and literary critic, a lover of weird and fantastic fiction Who knows what wonders, what horrors, may have transpired in the dim past, before our race stood erect?

This collection was a really interesting read, I really liked how the stories are presented chronologically, so it's almost like you can track the evolution of these supernatural tales and how they change over time. I had the opportunity to reread some great stories such as The Fall of the House of Usher by Edgar Allan Poe, The Call of Cthulhu by HP Lovecraft and Night Surf by Stephen King - The Call of Cthulhu in particular was even better on a second read. If I ignore my rereads within this collection, the stand-out stories were the following: The Fog Horn by Ray Bradbury, The Vaults of Yoh-Vombis by Clark Ashton Smith and The Events at Poroth Farm by T. First of all, The Fog Horn by Ray Bradbury... It actually prompted me to pick up a Bradbury short story collection. Fun fact: recently after reading this book I randomly found out that there is actually an August Derleth award (that King has won I believe) - weird how these things happen. This collection is worth it for the stories I highlighted (as well as the Poe, Lovecraft and King ones, if you haven't read those).

American Supernatural Tales collects twenty-six short stories by American authors organized in chronological order, from Washington Irvings 1824 tale, The Adventure of the German Student, to Caitlín R. T. Joshi, and the 2013 reissue of this book as part of the Penguin Horror series also includes an introduction by Guillermo Del Toro. Its interesting, then, that we begin with Washington Irvings The Adventure of the German Student, a tale set in Paris and featuring a German protagonist, perhaps to show that the earliest American horror stories were still strongly influenced by European history. Mr. Joshi, as the editor of so many horror anthologies, perhaps also wished for the collected stories not to overlap with his other books. Unfortunately, with American Supernatural Tales, the short story featured may not be a particular authors best work, or even one of his or her more exemplary works. The collections title leaves out the word horror altogether, and indeed, American Supernatural Tales is more effective as evidence of the evolving landscape of horror literature rather than a book read for scares. Accordingly, I would recommend American Supernatural Tales for those who are more interested in the evolution of American horror than for those looking for scary stories.

As with any collection, there were some stories that I enjoyed more than others, but for the most part, I really liked what I read and even found a few new favorites. Here's my rating of each story: --"The Adventure of the German Student" by Washington Irving: 3 stars --"Edward Randolph's Portrait" by Nathaniel Hawthorne: 3 stars --"The Fall of the House of Usher" by Edgar Allan Poe: 3 stars --"What Was It?" by Fitz-James O'Brien: 4 stars --"The Death of Halpin Frayser" by Ambrose Bierce: 2 stars --"The Yellow Sign" by Robert W.