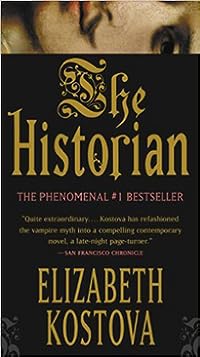 The letters are all addressed to "My dear and unfortunate successor," and they plunge her into a world she never dreamed of, a labyrinth where the secrets of her father's past and her mother's mysterious fate connect to an inconceivable evil hidden in the depths of history.The letters provide links to one of the darkest powers that humanity has ever known and to a centuries-long quest to find the source of that darkness and wipe it out.

It is a quest for the truth about Vlad the Impaler, the medieval ruler whose barbarous reign formed the basis of the legend of Dracula.

Generations of historians have risked their reputations, their sanity, and even their lives to learn the truth about Vlad the Impaler and Dracula.

In city after city, in monasteries and archives, in letters and in secret conversations, the horrible truth emerges about Vlad the Impaler's dark reign and about a time-defying pact that may have kept his awful work alive down through the ages.

Read the Book "The Historian" Online

You know youve been in school too long when you write a vampire novel in which Draculas ultimate threat is to force his victims to catalog his extensive library of antique books. The greater part of the book, however, focused not on this father-daughter teams desperate search for family member(s) and Dracula, but on the obscure history of Vlad Tepes, the historical figure who inspired the legend of Dracula, and on the geography of Romania, Bulgaria, and Turkey during the Cold War. If the Travel Channel was ever looking for someone to host Istanbul on a Budget 1980 or Passport to Monasteries Behind the Iron Curtain, Kostova would be their woman. Once, after giving a historian a book to start him on his vampire studies, Dracula disguises himself as a stranger and buys that historian a drink called, whimsically, amnesia. Not to be deterred by Draculas or the Evil Librarians threats, the historians continue to stalk their prey until the reader would pity Dracula (if he werent annoying), because he is ultimately only trying to build a book collection and a gang of faithful research assistants. In painful detail, Paul, the central historian/vampire slayer, as he tells his daughter the story of his search for Dracula, also tells of falling in love with her mannish mother, Helen. It was ultimately the research and study, not Dracula himself, that took the historians away from their loved ones and almost destroyed them.

This has got to be one of the most disappointing books I've read in a long time. But as you read it, the book just gets more and more ridiculous. *Everything* in this book happens by some remarkable coincidences. One here or there would be fine, even interesting, but it's as if the author decided 'here's how the plot should go', and couldn't be bothered to come up with realistic reasons for characters to do things and just wanted to move them from one point to another. One of the characters even ends up with amnesia. And for some reason, they all write unbelievably detailed letters. Now I have read a number of great books that use the format of letter writing to convey the plot. Not only are these letters insanely long, but they are insanely detailed as well, creating yet another reason why the book and the characters are completely unbelievable. If that's how the author wanted to write this, why did she do the letter thing at all?

When you are older, as you begin to read critically, you will learn to appreciate a good book, and you will be able to identify literary bullshit when you see it. Seriously, younger Khanh, what the fuck were you thinking when you enjoyed this book? You will be able to recognize a deus ex fucking machina when you see it. Oh, I know that you learned about deus ex machina in AP English. You learned about symbolism, foreshadowing, all that good shit, but really, it does you no fucking good unless you are able to identify it when you see it. And clearly, you did not see the tremendous, horrifying, abominable (that's a hyperbole) overuse of deus ex fucking machina upon your first perusal of this book. You will realize that a good epistolary book involving several different characters should have the characters be actually fucking distinct. Did you seriously think this book was realistic in any way, when you cannot distinguish between the narrative of an old man, an older man, and that of a girl as she grows from her early teens? Did you seriously buy into the letters and the "stories?" Fucking letters.

And much like Dracula, to which Kostova novel The Historian owes an incalculable debt (more so than many another vampire novel), the novel is constructed as a story within a story within a story. One of the novels central conceits is how much of the story is told in the form of letters written by the young female narrators father. We first are in Amsterdam of 1972 as our young narrator, a sixteen year old school girl, tells of discovering a mysterious volume in her diplomat fathers office and later of her journey to France. Part of what sends her out are the letters she is reading left to her by her father after he vanishes, telling of his travels and investigations into the Dracula legend in the 1950s Eastern Bloc. It resurfaced in Bulgaria in 1923, when the Bulgarian historian Atanas Angelov discovered it hidden in the cover of an eighteenth-century folio treatise on the life of Saint George (Georgi 1364.21) in the library at Rila Monastery.The second and only other known copy or version of the Zacharias Chronicle R.VII.132 or the Patriarchal Version is housed at the library of the Oecumenical Patriarchate in Constantinople and has been paleographically dated to the mid- or late sixteenth century. After sitting for some time near a railing cobby with webs, Helen Rossi, daughter of Pauls mentor and mother to the unnamed young narrator, ends up with an enormous spider on her back. What propels each of the main characters, the young girl (whose name we never discover), her father Paul, and his mentor, Rossi, is the discovery of a mysterious old book among their own, a book with one printed page, that of a dragon with a banner reading Drakulya while the rest of the pages are blank. Why and how these volumes keep turning up is one of the novel's mysteries an it's one of Kostova's rather clever conclusions in her own well-thought out realization of the character of Dracula. The actual climax of the novel as our heroes close in on Dracula and his daytime resting place seems rather rushed, ending just all abruptly as if Kostova had opted just to skip overt dramatics, which feels a bit of a cheat, though she does make up for this lack of action with a final pages reversal that is as unsettling as it is quiet.

If you are wanting to read it just because it has to do with Dracula, I would pick a much smaller book. However, I just love history and research (duh, I work in a library) so it was right up my alley. Basically, people who didn't enjoy it were out for a Dracula story and thought the history was "a drag".

I kept telling my friends I was reading "a book about hunting for Dracula through libraries across Europe," and that it was about as exciting as it sounds. Clearly Kostova is very influenced by Gothic and Victorian writers like Stoker, so maybe this book would have a grand payoff of an ending to merit the praise and best-sellerness. I wish I'd read an Actual Gothic novel - maybe even by Bram Stoker - instead of wasting way too long on this frustrating book.

I was horrified to read: xdragonlady's review: "My main problem with the book being that the author told the tale from so many different points of view, but that they were each told in first person without giving the reader any notice as to who was telling the tale. Could the novel I had just read really have been a confounding multi-tiered multiple first-person narrative with lack-luster voices which the author clearly mistook for a clever attempt at recreating a sense of research? I wish Brien had read the book at the same time as I did, I would liked to have talked to him about it." Blast!

Step into the pages and begin an eerie, haunted, hypnotic adventure thoroughly saturated in ancient history and wondrous, exotic, old European churches, monasteries and libraries that are positively brimming with ancient parchment and long, forgotten maps and books.

I would have enjoyed being at the pitch meeting for Elizabeth Kostovas The Historian. It had to have gone something like this: Well, most people think Dracula isnt real, Kostova must have explained. The Historian was the it book of 2005. Like Bram Stokers Dracula, this is an epistolary novel, with large chunks of it coming in the form of letters written by various characters. The central thread is set in the 1970s and is narrated by the unnamed daughter of a historian-turned-diplomat named Paul. The daughter stumbles upon an old book that, like the VHS tape in The Ring, brings nothing but trouble to the reader. These portions are comprised of letters written by Paul to his daughter. Finally, there is a briefer arc set in the 1930s, made up by letters written by Rossi himself. I didn't have any problem with the Rossi letters set in the 1930s. The Paul letters, on the other hand, are given only quotation marks. In other words, huge chunks of the novel (the Paul-Helen-1950s thread is the books lengthiest) consist of a nested narrative, ala Joseph Conrad. Paul and his daughter travel around, seeing cool sights, eating various biscuits, and having long conversations. Paul and Helen go to various countries, find an old monastery/church/library, and speak with someone who is either totally helpful or totally against them (one of their nemeses is the evil librarian; not kidding, thats what hes called). The historians in this novel really act a lot like real historians, except on meth. Paul and Helen visit archives, peruse old-timey documents, and attempt to decipher the past. Paul sets out to find Rossi, his mentor, becauseWhy? There are, in fact, enormous spans of time in which Paul doesnt think about Rossi at all, though he remembers to describe every meal he eats in his letters. Am I really supposed to believe that a character would write a letter hundreds of pages long? Hes too damn busy writing his War and Peace-length letter to his daughter.) The characters are not helped by the leaden dialogue. But Im also not going to give it an entirely free pass just because its a literary guilty pleasure (or whatever the term is to describe a book youre reading when you should be finishing Dickens). (There is no sex at all, which happens when you structure a novel as a fathers letter to his daughter).

The story is mostly about her father Paul, a historian turned diplomat, and his search for Dracula, Vlad the Impaler. Soon Paul is searching a library in Istanbul when he finds a map that suggests that Vlad's grave is not where conventional historical wisdom says it is, but he can't tell from the map where it might actually be.