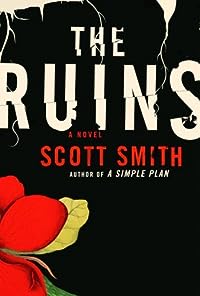 by Scott B. Smith

Trapped in the Mexican jungle, a group of friends stumble upon a creeping horror unlike anything they could ever imagine.

Read the Book "The Ruins" Online

Scott Smiths wrote one of my favorite crime novels with A Simple Plan that released in 1993. Thirteen years later came his second book, The Ruins which instantly became one of my favorite horror novels. A lot of horror is based around punishing people for their actions. Smith does a great job of playing off the human nature of being in a bad spot and wondering how you got there only to have the sickening realization that you knew for a while that you heading into trouble, but you somehow talked yourself into staying the course it with the assumption that everything would work itself out. (Serious spoilers here.) (view spoiler)Jeffs insistence on amputating Pablos legs and trying to convince the others to eat the corpse of another illustrates that you can make a bad situation worse by trying to do the right thing.

Ive always had this conception that the horror genre, be it books or movies, are meant to be scary. Did this book or movie scare me? While reading Scott Smiths The Ruins, it occurred to me that my concept of horror is wrong, or at least strikingly narrow. I'm old, and I'm starting to recognize all the things I don't get. Mathias suggests they go meet his brother at some Mayan ruins. For some reason, Jeff, Amy, Eric, Stacy, and the functional alcoholic, non-English speaking Pablo all find this a good idea. Smith is like the Salinger of the modern suspense novel scene. One of those movies had Billy Bob Thornton in it. That movie is not the one based on The Ruins, because there is no place for Billy Bob Thornton among young, attractive vacationers getting themselves into a situation. Smith grounds things so well in reality that I readily accepted the gradual ratcheting of the horror elements. There are passages in The Ruins that are among the most brutal and graphic things I have ever read. I also recognize that horror, like religion and politics, creates wildly divergent reactions in people. He excels at scene-setting, characterizations, dialogue, and creating tension. In my humble opinion again, the opinion of a man who reads two or three horror novels a year, at best this is a classic.

Part of it is probably that it straddles the line between horror and thriller, stymying people who like to be able to slap a convenient label on things. Sure, I wanted to slap them around from the moment they decided it was a good idea to go for a romp in the Mexican jungle all the way until the end but that's how horror stories of this type go sometimes. The vine was creepy but that wasn't a surprise since plants are emotionless monsters. While The Ruins isn't your grandma's horror novel, it delivers the goods if you're looking for a tale of desperation and creepiness.

I withheld half a star because I think the threat could have been managed: one thing kept running through my mind the entire time which would have saved lives but I won't tell you because that would spoil all the fun! If you've read this book and you want to ask me what it was, hit me up on Instagram and I'll tell you!

Unfortunately, you may as well just watch the trailer and read the first forty pages of the book, because beyond that, it doesn't deliver. Smith acknowledges their single dimensions midway through the book when the characters are talking about a film version of their situation and one of the character breaks them all down into types ("the boy scout" "the prissy girl" "the slut" "the funny guy"). Once I got to the point in the book where it's clear the characters are stuck on the mountain, I thought, "I sure hope the next 400 pages aren't spent just detailing how these people die. I think a more interesting approach would've been to either tell part of the story from the Mayan's point of view or from an omniscient POV, detailing the history of why such a malevolent force is at work in this spot. I found the book frustrating because the characters briefly seem to be going in this direction, mentioning how the Mayans have contained the plant and guessing at why they continue to hold people captive here.

If you are looking for some genuine thrills and chills this Halloween season, this may be the book for you. I just don't get the storm of criticism aimed at Scott Smith's second novel, The Ruins. The situation becomes a fascinating microstudy of human behavior -- "the group in peril" scenario we've seen before in classic stories like Golding's Lord of the Flies, Saramago's Blindness, or Stephen King's novella "The Mist".

Scott Smith's The Ruins is one of the best horror novels I've read in some time. The most common complaints are that the characters were unlikable, that there were no lofty themes or messages in the story, and that the nature of the threat the characters face in the Mayan ruins where most of the book takes place was impossible to take seriously. They are drawn so well, in fact, that they really seemed like real people to me. If you're able to read The Ruins and tell yourself, "This could never happen," then you'll probably hate it. But if you're able to give yourself over to the situation and see yourself in the novel's characters, you will feel a creepy and pervading sense of doom.