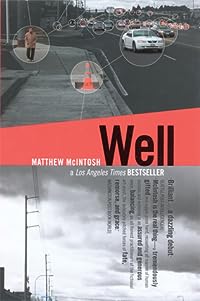 The result is a mesmerizing tour de force that will establish Matthew McIntosh as a bold and progressive new voice of American fiction.Stories:BURLESQUESnapshots of various troubled couples on the day that the Seattle SuperSonics lose their chance at advancing to the NBA finals.

Len and Adda are fighting- Len is in love with Adda (she is "the girl he wanted") but she is torn, and is leaving the next day to spend a week with her fiancée to make sure that breaking up with him is the right thing.

Len becomes jealously enraged when he finds out Adda and her fiancée will be sleeping in the same bed, begging her not to touch the man.Nate and Sammie are also fighting: Sammie insists that a certain girl who is trying to convert Nate stop calling their house.

Nate gets tired of Sammie's hysteria and beats her, only to become terrified at what he has done.A first person narrator recalls his rather pathetic adventures with prostitutes in Thailand, where he made big money at an English language newspaper and lived like a king.

He misses it when the team loses at the buzzer.The SuperSonics janitor comes home to his wife, who is pregnant.

She meets an older man who takes her in but finally gets sick of giving her money to drink and sends her home.

When her mother isn't home, she goes to the nearest bar.III.

One day Davin gets in a fight with a co-worker and is paralyzed on his left side after being hit in the skull.

Sarah takes care of him in the hospital, but when he returns home he begins drinking.

One night he picks the 2-year-old up while drunk and Sarah becomes hysterical when the child begins crying.

Sarah moves out and eventually begins dating a construction worker she does not really love.CHICKENA group of guys gets into a game of chicken with a car containing a guy and a bunch of girls.

When the guys cut the girls off suddenly, the driver of the latter car approaches the guys in an insane rage and finally hits the driver in the nose.Santos and his young partner work at a hotel-they go to Denny's when they should be training an Ethiopian who messes up on his first day.

The guys get fired for this and Santos, humiliated, tells the young partner about the time he made a buzzer shot in a college basketball game only to have the game-winning points taken away from him by the refs.A kid drops some pills at the bus station and gets stuck on the Greyhound listening to a vet recount his experience in Guam, where he dug a whole to save himself from gunfire.VITALITYSPACEMAN: Charlie is a lonely gay bartender who has started to feel old and fat.

Although he loves bartending and meeting people, etc., he loses his job because he has kept drinking on the job after repeated warnings.

On the night he loses his job he goes home to try to clean his filthy house but ends up vomiting into the toilet, longing for company.DAMAGE: A young man enters a peep bbbbbbooth with his friends and is struck by his ugly reflection as he looks at the beautiful dancer.

The young man "pounds the Living Holy Fuck" out of the bouncers.ACHE:A man begins experience atrocious cyclical spells of pain, incoherence, and anxiety after he dives into a swimming pool one day and hits his head on the bottom.

He moves to London to get away from it all and meets a girl who wants to marry him but eventually assaults her in a fit of hysteria.

He moves back home and lives a quiet life.

When the pain is gone, he discovers that he misses it.THEY ALL WAIT FOR YOU:A man finds out that he will die of cancer and spends his day at the Trolley bar, getting hammered and thinking about the pointness of it all.ONE MOREA man walks into a pharmacy with a fake prescription.

The pharmacist dials 911 but before the police come he shoots himself.GUNMANThe gruesome last days of two gunmen-one who killed his family before racing through the city on a killing spree as he fled from the cops, the other a man who shot a city bus driver- are recreated in a frank, reportorial manner.FISHBOYThe narrator, a somewhat pathetic naïf whose father wrecked the home by cheating on his catatonic mother, develops a crush on a girl who works at a fish restaurant.

It starts to rain and he finds himself "there, somewhere, in-between."GRACEA Jesus-loving woman develops a mysterious degenerative illness and is forced to spend the rest of her days in a home, putting up a front of hope but knowing that she is on her way out.LOOKING OUT FOR YOUR OWNThe narrator remembers his first love, a girl without a mother and an abusive father.

When the narrator accidentally gets her pregnant, the girl's father storm into his house and almost chokes him to death.

Thinking about his mentally retarded brother that his parents institutionalized and about the beatings his girlfriend has taken from her father, the narrator breaks up with the girl because he feels guilty that he can't take care of his own.

There's a Hubert Selby Jr. quote on the cover: 'A book that still resonates in my heart.' I can see why they sent him a copy.

Both books get blurbed by Selby Jr ; but it's the first that fits in his world ; the second is pretty much beyond him. (ah hell, that was a blurb for Well not themystery.doc (one must always read small print and contextual clues)).

In fact I read 'Fishboy' on a plane to Amsterdam and wanted the flight to go on longer so I could finish the story -in fact I just managed as it bumped down. OK , nothing new, but the story bumped along like the plane and then soared, passages such as the following: The door exploded. From the opening in the doorway, a long red flame burst in and split the room in half. I watched, petrified, as the man in black walked over to my fishtank and sprayed it with flame - the water boiled and my fish burst their seams. The stories are all pretty good, most - all - downbeat, drugs, (I like downbeat, drugs) tight, and also funny as when a bloke rings a sex line but keeps changing his mind about what he wants - He wanted to know if she liked to be with men and women at the same time. She was with a young #brunette# coed and she was an #older# woman - a friend of his mother's from when he was a teenager - Rebecca White was her name.. No, what she #really# wanted was to be with a young coed and a teenage boy...

This is not a book about like-able characters, and McIntosh forces the reader into their minds.

Some experience it to a greater degree than others, and how they cope is what makes this book work.

He graduated from the creative writing program at the University of Washington after years of being enrolled on-and-off, during which time he held numerous menial jobs.