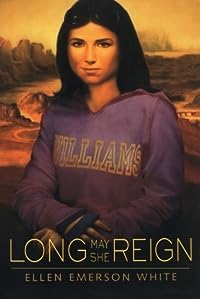 Long May She Reign

Meg Powers is the daughter of the President of the United States.

She's living through the worst year of her life.Last June Meg was kidnapped by terrorists - brutalized, starved, and left for dead.

Ahead of her is the grueling physical therapy to heal her broken body; the challenge of leaving the safety of the White House for her freshman year at college.

Will she ever forgive her mother, the President, for her "can not, have not and will not negotiate with terrorists" stance - even when it came to her own daughter?And more difficult still, can Meg forgive herself for having the strength, the intelligence and the wit to survive?In a brilliant novel, Ellen Emerson White tells her most ambitious and intense story about a most unlikely but deeply affecting heroine.

Read the Book "Long May She Reign" Online

The series follows Meg Powers, daughter of the first female president of the United States, and her experience moving to the White House and adjusting to life in the public eye. So Meg closes her eyes and makes the decision to go ahead and go to college hoping her absence will make it possible for her family to move on. Fortunately Meg meets a couple of people who are determined to insinuate themselves into her life whether she wants them or not: her JA Susan (the main character in Friends for Life) and an Ultimate Frisbee-playing, love 'em and leave 'em California boy named Jack. Having been through her own personal hell when her best friend was murdered during their junior year of high school, Susan is familiar with the seemingly insurmountable challenge Meg faces in attempting to reclaim her life. I love that Meg and Jack are equals--two extremely flawed, extremely interesting, extremely complicated people attracted to each other precisely because they are flawed and interesting and complicated. Long May She Reign was hands down the book I was most excited about this year and it exceeded all my expectations.

At the start, I kind of felt that it was rehashing things that had been covered in that book, but it wasn't, really. And I love the intersection of the books. Honestly, reading this felt like visiting old friends. *g*) And honestly, I loved Jack and their relationship. Just, you know, love. I want the first three books to be released very soon - I don't know how well this one stands alone, being so immersed in the world already, and the first three are out of print.

The writing and dialogue and relationships (I WILL NEVER NOT SHIP MEG AND PRESTON) between everyone is just A+++ and while I love this series as a whole, I will have to say this particular book is my favorite.

I understand EEW's being drawn to tell stories of strong, intelligent women working through trauma. And this portrayal of Meg working through PTSD and constant terrible pain is probably quite accurate. You so much as bump a knee or hand like hers...) I like Meg. I wanted to like seeing Meg in college. In 700 pages, I want to see Meg graduate from college. The story just needed to move forward.

I was originally very impressed that White choose to pick up after this horrendous, traumatic experience (Meg Powers, the daughter of the President, was kidnapped and beaten, and finally left for dead; she saved herself by smashing her own hand to escape from handcuffs and wandering through the woods for a week until she found a house), and deal with the aftermath rather than writing about the actual events. I always used to mention that to people when they bought books in series I read, to make sure they weren't starting with book three or something.) But I was still blown away. I'm now on a desperate hunt to find the previous books in the series, though I'm almost sad this isn't a stand alone - it was such an interesting and unique way to handle the situation, by focusing on the aftermath, giving little bits of insight into what happened to put Meg in the state she's in.

(Oct 2008) I still like this a lot. I wish there was more wrap-up at the end, or another book in the works.

The Beany Malone-style updating to the present day was both necessary and seamless, though I imagine it might be weirder for people who read through all four for the first time now.

It's probably fair to say that the main character of Meg Powers isn't a very likable character in some ways. To be sure, there's none of the dramatic plot points of the first three novels of the series (Mother being elected President, Mother being shot, Meg being kidnapped by terrorists), but as someone who suffers from depression and whose father is (still, always) locked in a therapeutic battle of wills with his own PTSD, I found it to be plenty dramatic enough for me to want to keep reading just so I could find out if Meg and her family are going to get any better. Until this point, I've always kind of felt like Preston was too good to be true, but in this book he's allowed to be tired and overworked and snippy and deeply upset over the events in Long Live the Queen. I'm sincerely hoping that we're going to get another book in this series - maybe one regarding the President's run for a second term? Good lord - most of the "cursing" in this book is "Jesus Christ" and "God Damn" - there's a few "Fucks" scattered throughout, but we're talking about a mostly 18-20 year old cast of characters and our main character is a PTSD suffering 18 year old with severe chronic pain, incredible amounts of daily stress, and significant levels of depression, isolation, and fear.

At first, I had a hard time getting into Ellen Emerson White's writing since I have no clue about American politics and that's a huge aspect of her President's Daughter novels. Meg eventually won me over as I read the rest of the books in the series. There's something about Ellen Emerson White's writing that makes me want to read more of her stuff. For now, I have to patiently wait for my copies of Romance is a Wonderful Thing and Life Without Friends to get here. Here's an article about EEW's writing over at The Savvy Gal. Check out this interview, where EEW says "Its too early to say, but I suspect there will be more than one sequel and they will not be all from Megs point of view" about more books about the Powers family.

In addition to novels, Ms. White has published several biographies.