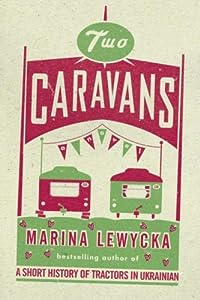 Also published as Strawberry Fields.The bestselling author of A Short History of Tractors in Ukrainian is back with an "effervescent comedy" (The New Yorker) The follow up to her hugely popular first novel presents a Canterbury Tales inspired picaresque that is also a biting satire of economic exploitation.

I don't know why I'd describe it as light, when it involves prostitution, minimum wage, exploitation of 'unskilled' workers, not to mention the battery chicken farm episode which has put me off eating poultry for at least the next week.

It ticked a lot of boxes for what I would like from popular fiction, things which are quite difficult to find in practice: a strong focus on average or low-paid work with more or less realistic depictions of jobs and people; humour and adventure but with an awareness of the grittier side of life; not primarily about standard genre topics like romance, crime etc, but these are okay as subplots. One of the main problems with the book is that some of the wordforms of characters speaking English as a second language - especially when they are writing - sound unlikely and exaggerated, and as if they are written to demonstrate the differences between characters from various countries. (But then having characters with written voices that sounded similar could also be a problem.) Towards the end of the book this decreases in the Ukrainian characters, and the errors sound increasingly realistic, mostly just missed articles (Slavic languages don't have articles) and a few words not known - though the apparently unlikely errors are still present a bit in the letters written by Malawian Emmanuel. I don't think Lewycka intends to mock the characters, and as she seems to have some experience in frontline public services (she has also written several non-fiction manuals for carers), I think she is inspired by types of people encountered there, some of whom present for help because they don't have very good bullshit-detection abilities on their own. Fictional characters of East European migrant workers holding opinions that were sexist, or stereotypical of BAME people, could read as simply realistic, and these characters as good guys (male and female) because there wasn't the level of overt prejudice against either Eastern Europeans or PoC that is now visible via social media and party politics, and there hadn't been much public conversation about the problems of replicating stereotyping via fictional characters who practise it themselves. (These days I think more narrative from the Chinese girls' viewpoint, especially as a conclusion, would be expected from the novel.) I tend to think of stereotyping as a near-inevitable part of popular fiction outside SFF - i.e. it's an unusual and pleasant surprise if it's *not* there - but there is plenty about this book that I can't imagine being published by a UK literary-adjacent imprint, as an English-language original, in 2019.

I guess this was their marketing ploy but it isn't hilarious, in fact the situations the characters find themselves in would only be funny if it wasn't so true.

This book ticked a lot of boxes for me. But it's certainly worth sticking to it because it allows the reader to get inside a number of heads and find out what makes them tick and see the world through their eyes through the filter of their knowledge.

I think it is a stronger story and more interestingly written & structured than the History of Tractors book (read in Spain, 2006, but that's a complete aside). Exploitation, poor working conditions, Eastern Euro cultures struggling to part from the communist past but taking with them the worst excesses of capitalism. I'm not sure how on one page Vitaly was picking strawberries and selling overpriced cans of beer to his comrades in the caravan & the next is working for the migrant employment agency in Dover finding dodgy jobs for those fresh off the ferry from Europe, dreaming the big dream of legal work in the EU.