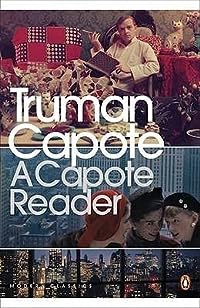 . .' Truman Capote began writing at the age of eight, and never looked back.

A Capote Reader contains much of the author's published work: his brilliant and prolific oeuvre of fiction, travel sketches, portraits, reportage and essays.

Generous space is devoted to reportage including 'The Muses Are Heard', on his trip to Communist Europe in the 1950s with the cast of Porgy and Bess.

In all, A Capote Reader demonstrates the chameleon talents of one of America's most versatile and gifted writers.

A Capote Reader is a long collection of short stories, novellas, travel sketches, reporting, portraits and essays by Truman Capote.

The recent death of the veteran actress Elizabeth Taylor brought to mind another aspect of Capotes work the detailed and memorable little pen-portraits he painted of some of the celebrities he knew, not the kind of superficial tittle-tattle one usually associates with this kind of thing, but revealing, affectionate and intimate. My favourite of his pen sketches by far is A Beautiful Child, an account of the day he spent with Marilyn Monroe, but Elizabeth Taylor, published in 1974, is almost as good, not just for the sympathetic way he depicts her but for the obvious empathy between the writer and the actress, which, in so few words, enables him to get well below the surface. She clearly had a type in mind, as Capote immediately deduced; Perhaps not; not like Marilyn Monroe and Judy Garland, both of whom had yearned to go over the horizon, some darker rainbow, and before succeeding, had attempted that voyage innumerable times. When it came to life and relationships Taylor was certainly a gambler, evidenced by her turbulent relationship with Richard Burton, another movie veteran, a relationship itself with enough drama for a movie; a relationship that, in some ways, did make a movie in the screen version of Edward Albees play Whos Afraid of Virginia Woolf?, where they played opposite one another in the lead rolls. I think also of the brilliance of past celebrity, the brilliance of Taylor of Burton and of Capote, now all over that ultimate horizon, compared with the mediocrity of the present.

I though the travel writing was patronising to the locations and the people in them. Ironically, the piece I liked best was Breakfast At Tiffanys, where the main character was at least developed to some degree.

I have read A Capote Reader, the almost complete works of Truman Capote, in 744 pages, four times; never finding it tiresome.

This volume includes several short stories, travel sketches, people sketches, novellas and other bits and pieces. As of writing I have read the short stories, which are mostly pretty reasonable. There's also a doubtful interview in the reportage section with the Manson family member Beausoleil, as well as a full report on Capote's visit to Russia with the cast and crew of Porgy and Bess back in Communist days.

I feel compelled to buy it again, read it cover to cover again, and conjure up not only the people and places of that time in my life, but the people and places that staff the working parts of Capote's real and imagined lives. There's a particular piece of reportage where he spends his day with his housekeeper - getting into trouble with her, and thus getting to the heart of his otherwise unknown compulsion to know more about her life - that makes me smile whenever I think of it. While many writers tell tales of their own conquest, Capote comes off as much more humble, much more gentle and much more engaging than most.

Capote does a great job with some of these, and others are a little less than fully stirring; still, he implants a certain gloom in to the day-to-day storylines of these dynamic and profoundly American characters that leaves you with an almost-complete knowing of who they are, while maintaining a certain mystery to theire inner workings.