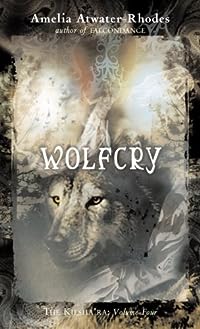 Oliza Shardae Cobriana is heir to Wyvern's Court, home of the avians and serpiente, whose war with each other ended just before Oliza was born.

But hatred is slow to die, and not everyone likes the expressive way in which Urban, a serpiente dancer, is courting Oliza--especially not Marus, her reserved avian suitor.

How can she be expected to lead a unified society if her people still cannot live peacefully together?

She owes it to her people--and to herself.

I don't think I've ever seen more offensive reviews on any other books, including ones with LGBT characters, and I feel like I need to address this so that anyone out there who is thinking of reading this novel will give it the chance not given by many of the bigoted reviewers on this site. Every single low rating I read has come from the simple distaste the reviewers had with a lesbian relationship. (Admittedly, I didn't read them all, but after about 15 reviews I was starting to feel sick). Some of the reviewers have tried to disguise their discomfort with the relationship with the excuse that it felt abrupt, but when you qualify that by saying it was so different from her other endings....it's clear it's just the lesbian relationship that bothers you. Other than this book, Hawksong would be my favourite in the series, but that ending? This is the first book that felt like it really took you through the whole story.

I will not go into details...in case you want to read this book but the ending went against things that I believe in...too bad!

=( Very sad about this one =( The good news is you can stop at the third book and it feels like the story is complete.

It felt more like Oliza settled on a female mate out of convenience rather than true love. To be honest, I didn't even finish reading the book..

After reading Falcondance, I'm finally glad to have returned to the main storyline involving Wyvern's Court. Wolfcry gets five stars from me simply for being such a thrilling read; the twists and turns of the plot really do keep you engaged until the very end of the book. I even wish the author had spent more time showing us some more intimate scenes of Oliza and Betia bonding, but I suppose Amelia wanted to keep this book safely in the Young Adult genre by not including more mature scenes (although she showed some sexual scenes in Falcondance, they were implied and weren't explicit, she could've done the same thing here). I really would've liked to have better known Betia as a character and felt her love for Oliza on an emotional level, but I suppose Amelia was trying to keep it rather bland to avoid offending the readers' "tender sensibilities" with a lesbian relationship (their many days in the wilderness would've been the perfect time to develop Betia's character, though). It looks like the last book in the series is narrated by Hai, so I guess I still won't see much more development of Betia and Oliza's relationship. I found the ending to be way more believable than any other--a messy and difficult conclusion to the current problems of Wyvern's Court, kind of like the real world can be messy and difficult.

In the same universe, there could just as easily be different shapeshifters and kingdoms with their customs and trials an ocean away, and I really like that.

Wolfcry has Oliza, daughter of Danica and Zane, struggling with the demands of having to choose a mate. The two suitors competing for her attention, a serpiente named Urban and an avian named Marus, are friends of hers but she's never felt anything more for them than that. Not saying that every time someone doesn't like an LG pairing in a book it's automatically homophobia, but I feel like it's just a little suspect, especially in the case of Wolfcry. If Betia had been a boy, I have no doubt that people would read their relationship as romantic. (view spoiler)And for everyone saying she made the easy choice, or that she used Betia as an excuse to run...Did we read the same book? There was no way she could have ruled and it would have ended well for the people she was trying to protect. Honestly, Wyvern's Court was doomed from the start and it wasn't the best decision on Danica and Zane's parts. Especially since Hawk's Keep and the serpiente courts would remain.

The best part of school, from fifth grade until the year I graduated, was definitely chorus. My non-writing hobbies are eclectic, and cover everything from rather domestic pastimes like cross-stitch and cooking to aquarium keeping, playing piano, gardening, carpentry, Harley-Davidsons, driving, and arguing- there are few things I enjoy more than a good debate with someone who knows how to argue, which might have something to do with a best friend who works in politics.