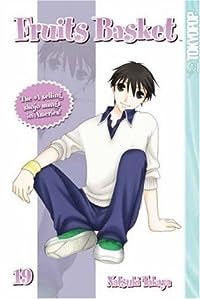 As the Fruits Basket saga continues, the relationship between Tohru and Kyo becomes increasingly complicated, especially since most of the members of the Zodiac seem to look down on him.

But what, if anything, can cure Kyo?

There are only four volumes left and I dont know what Im going to do once I finished this series! Its such a comfy series I can read whenever I need to make a pause between books and I love all those characters! - So if Shigure isnt killing me already, Tohru and Kyo definitely will be the death of me. T_T - Everyone noticing that Kyo and Tohru love each other. <3 I love that Natsuki Takaya lets them grow and draws them differently when they get older! I mean we all know what is going to happen to the cat eto if the curse isnt broken!

it focused a lot on Tohru and Kyo's relationship and let me tell you... There's even sad back-story involving Ayame and Mine, as well as Manabe, Komaki, and Tohru. The only thing that drags this volume down is, of course, Akito. Another thing I have to say about this volume is the fact she's not making anything soft at all. (Lately the volumes have been ending on sad notes... OH YOU KNOW WHAT I MEAN!!!) By the way, isn't it shocking how Takaya-sensei brings things out from no where? I don't expect half of the things that's thrown my way and I love her for that! Nothing makes me more upset than reading something and me guessing everything that happens. It makes the story dull and weak so the fact that Fruits Basket is not like that at all really makes me love it all the more. As I've said before, this story focuses mostly on the relationship with Tohru and Kyo and what's to happen after graduation. a character that sees things in a very different light. >_:3 The side stories in this volume was about Ayame and Mine. It was a little sad seeing what Ayame did to that high school girl but with Mine, she helped him see the error of his ways and he changed for the better. *Flails* The part of the story that was depressing was when Manabe revealed what he did with Tohru. As the reader, you know that he and Tohru are connected; we saw a lot of hints of that in previous volumes. However, we don't know how they are connected until we read it in this volume... and let me tell you, it's going to make you go, "NO BLOODY WAY!!!" Also, Komaki is finally shown. One last thing: Akito was in this volume and he did annoy me but he's only there for a split second and it's not even that bad because Shigure treats him like crap. What do you think is going to happen!? You already know I want you to read this manga with me!

Things have been getting awkward between her and Kyo, espcially after Hatori tells her that secretly all the other Sohmas need Kyo, the cat; they need to know that his curse is worse than theirs, that he will soon need to be confined for the rest of his life.I swear, this series better end with Tohru breaking the curse for the whole family, Kyo included. Komaki is another cute and innocent and optimistic girl with a wide smile, just like Tohru.

Let me tell you what this volume is really about. Shigure talks to Tohru about the curse and saving Kyo. They kind of get into it because Shigure is so blunt about Kyo's fate and how the rest of the Zodiac feel about him. I mean, I don't think he really cares about Kyo. He just wants the curse to break. Kyo runs into Tohru's grandfather, who tells him he thinks Tohru acts like her father because some old lady told her they were nothing alike when he died. Ayame tells a relatively serious story about love and rejection. Speaking of Kakeru, there's also a little chapter at the end about him and his girlfriend (whose father also died in the accident that killed Tohru's mother). It's kind of a filler chapter, except I think it gives Yuki the kick he needs to try a little harder with Machi.

While it always takes me a while to get into the rhythm of reading manga, with the right-to-left order, sound-effects characters, etc., I actually feel like I could follow the story this time. Because most of the characters are teens, it's also really neat to see how Takaya has had them grow and mature, physically and mentally, as the story goes on. So, I can't wait for the next volume to get here (I have all the others) so I can finish and find out what ultimately happens.

Yuki gives Machi an apology gift for Ayame's behavior at the shop, and tells her they should get together during summer vacation. Kakeru apologizes to Tohru for his past hostility to her, shortly after the accident, and she thanks him for helping Yuki become more cheerful.

Tohru is afraid that if she loves Kyo, she'll lose the memory of her mother. I love that we're increasingly seeing this side of him in the last volumes. Kind of weird, but I suppose it eliminates the competition with Kyo. Another highlight of this volume is seeing post-puberty Momiji!

Oh man, I started sobbing like three pages into this volume!!!