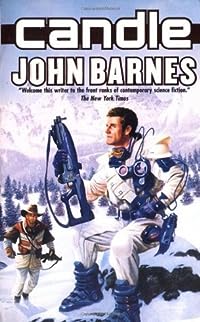 Currie Culver is about fifty-five years old, in good health, living in a comfortable retirement in the Rockies with his wife.

In the wake of the Meme Wars that swept the planet two generations before, Currie, his wife, and almost everyone on Earth have in their minds a copy of One True, software that grants its hosts limited telepathy and instills a kind of general cooperation.In his younger days, Currie hunted "comboys"--people who had unplugged from the global net in order to evade One True, and who hid in wilderness areas, surviving by raiding the outposts of civilization.

With his high tech equipment, thoroughly plugged into the global net, Currie sets out to bring Lobo in.Instead, Lobo captures Currie, and manages to deprogram him.

Thrown back on the resources of his own intelligence, courage, and wisdom for the first time in twenty-five years, Currie finds himself in a battle of minds with his captor .

Characters Currie Curtis Curran - retired Cowboy hunter, narrater of the story Mary - Curries wife, fragile and unstable, she needs constant management from her Resuna. Dave Singleton AKA Lobo - Cowboy fugitive (AKA someone not plugged into One True) Kelly - Daves daughter One True - an AI (though AI is never used in the book, it and all the competitors for the human minds are called memes) comprised of billions of copies of Resuna running in human brains. One True won the meme wars and now nearly all of humanity lives peacefully constantly monitored by their own personalized copies of a program called Resuna (small programs that as a whole make up One True). At first Currie argues that One True didnt do that but his argument fades even as he is making it because in fact his whole life his and Marys Resuna have been fixing things. Turns out Dave put a copy of a meme called Freecyber in Currie and then burned his port. When Resuma finally talks to Currie again, it turns out it has been there all along unable to communicate and being separated from One True, it seemed to have evolved and independent personality - to the point of pouting and being angry at Currie at one point.

The Sky So Big and Black is still my favorite, followed by Orbital Resonance, Candle, and the weird and disturbing Kaleidoscope Century, the book pictured here because its title captures the scarily plausible alternate recent history and near future that these books describe. The future is not a simple time in Barnes' books, and although space plays a big role (Sky So Black takes place on Mars, Orbital Resonance in a hollow-asteroid colony/shuttle space ship whose orbit "resonates" between Earth and Mars), and space colonies provide a lifeboat for small fraction of the population of a fast-sinking Earth, space is not the main point. These books connect in my mind to a lot of things, including a sobering article in this week's Space Review called "Space and the End of the Future." I guess the future did fail to arrive as sketched by Walt Disney, and I guess there was never any golden age of space where more than a tiny fraction of the world was engaged beyond an "oh wow" at the idea of some guys walking on the Moon, and then yawn, turn back to the game. The connection is this: things are complicated now, and the future won't get any simpler.

Nevertheless, the book was readable and discussed interesting philosophical questions.

If men chasing other men through the wilderness while sleeping in fancy electric tents and using polymorphic plastic snowshoes seems hilarious to you - then this book will be a fun read.

All that's in the past of this book; the meme One True has taken over the pool, erased all competing memes; everyone left alive on the planet runs a copy of Resuna in their brain, and One True itself is an emergent gestalt program that runs, massively parallel, out of all them linked into the network.

This story is set in the mid to late 21st century after a series meme wars and power struggles did serious damage to the planet and the cities. The elite and important people now live in supra cities at the end of space elevator like stalks high above the Earth, insulated from the damaged planet. What I didn't like was the way Barnes uses extended flashbacks to tell us what happened in the Meme wars and other power struggles that led up to the current time.

At the time of the story, the One True meme is being run by nearly every human on earth with the exception of a few "Cowboys" living outside the system.

A cowboy being an individual that isn't running a copy of Resuna, and is not controlled by One True. I guess that gives Barnes more time to give us interaction between Currie and his copy of Resuna, and set more of a picture of what his character is like. The back stories of Currie and Dave were interesting and gave us insight into the characters and the history of the Meme war era.

The cowboy who's out alone in the middle of nowhere for months at a time with no one to depend on but himself and the astronaut who can't even begin to do his job without an army of scientists and technicians to get him where he needs to go in the first place and then monitor his every tiny movement and change. I'll note that you can, of course, make the counter argument that free-thinking individuals does not necessarily lead to conflict which seems to be an underlying assumption in the universe this story takes place in, at least from the viewpoint of One True.