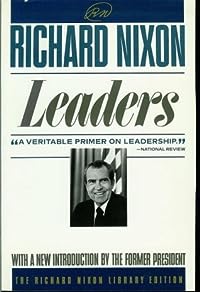 When Nikita Khrushchev shouted contempt for the United States in his famous Kitchen Debate with Vice President Richard Nixon, Americans gasped at the sudden glimpse of the Soviet leader's character.

But how much more would we have learned if we could have traveled the globe with Richard Nixon and met privately with others who have shaped the modern world?Richard Nixon knew virtually every major foreign leader since World War IIsome at the pinnacle of power, some during their years in the wilderness out of power, and still others toward the end of their lives.

He illustrates these leaders in private, assesses their careers, recalls words of wisdom, and brings to bear his own judgments.

We see the intensely private Charles DeGaulle; explore the philosophies of Konraud Adenauer; confront Leonid Brezhnev; and delight in the company of Winston Churchillnot to mention Nixons analyses of interactions with dozens of other leaders.No one but Richard Nixon could have written this book.

Richard Nixon writes about the qualities and characteristics that go into what makes someone a great leader. Nixon limits his focus to great leaders that he knew personally. Thus, while much of the book consists of mini-biographies of the individuals he has picked, along with a final chapter that nicely summarizes Nixon's thoughts on what makes a leader great and what challenges lie ahead for leaders of the future, a large portion of the book is his invaluable personal reminiscences of meetings that he had with these heavyweights. One theme that runs constantly throughout the book is that most of the people he chosen to write about went through a difficult, sometimes demoralizing period where they were out of office, and thus forcibly removed from power. The chapter on Douglas MacArthur is, in my opinion, Nixon's weakest part of the book. Towards the end, Nixon put together a chapter composed of several leaders from different countries. Oh, he appears periodically throughout the book, but more to prove a point with the leader that he was discussing at the time.

I have enjoyed the president's other books, but this one just did not capture my interest, despite being the history and his recollections of the international political leaders of the 20th C. For someone who is interested in the post-WWII leaders and history, maybe this book would catch your interest more.

Here specifically Political Leadership. Through these reminiscences he explores leadership; How a leader is made and what are those necessities and major characteristics that goes in making a successful leader.

For example, he said: ''In their personal diplomacy Khrushchev and Brezhnev were like Lyndon Johnson. In the next he would assert with unequivocal determination his right to control the destinies of other nations all around the world.'' So much is being said in todays political climate about Nixon, and his response to Watergate, that it is interesting to reread this book and she how differently he saw the rest of the world from the one that was here in the United States at that time. Nixons said early in the book that managers work with their goal being 'to do things right'', compared to leaders whose goal is ''to do the right thing''.

Nixon was no doubt a brilliant man; a genius at foreign policy with a firm understanding of geopolitics. On David Ben-Gurion: Other Israeli leaders, then and since, have coveted more land. Unimproved, he said, the desert was 'a reproach to mankind' and 'a criminal waste in a world that cannot feed its population.' Improved, he insisted, it would provide all the space the Israelis needed. The Arabs will outnumber us, and undemocratic, repressive measures will be needed to keep them under control.' This observation by Ben-Gurion with which Nixon agreed, almost perfectly describes what is happening in Israel now. He makes many pointed observations about leadership and the necessary qualities of a good leader, but it is impossible to forget that he is the man behind and brought down by Watergate.

Nixon's interactions with the Soviet and Chinese leaders form the most interesting parts of the book, as these interactions were of great historical importance to the US and the world. His interactions with leaders such as Churchill, MacArthur, De Gaulle, and others are less important historically, occurring when he was Vice President in the 50s or before his presidency in the 60s, but are always interesting as they offer eyewitness insights into the personalities of these figures.

It isn't necessarily to say they are the best books (although they might be), but they have certain anecdotes, certain observations, and certain lessons you want to continually draw on that make you come back to them again and again and remember. Nixon is a prolific writer, and I've read several of his books. For anyone interested in any of these leaders or the issues they are involved in, or just anyone who wants to understand how the last century was shaped, this is a great read.

At the same time, Richard Nixon, with his outstanding political career which spans over much of a lifetime, tells the reader what to do and what not to do as a leader, how and why leaders have failed in history and how and why they've reached the top.

If youre at all interested in foreign policy or international relations, this is a fascinating book written by a president who left an international mark on the world.