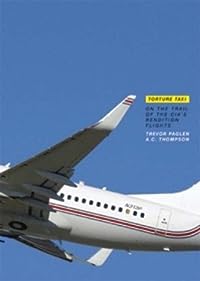 Torture Taxi: On the Trail of the CIA's Rendition Flights

In a series of journeys investigating the agency, they have uncovered all of the major elements of the CIAs rendition and detention operations.In Torture Taxi, they travel to suburban Massachusetts to profile a CIA front company that supplies the agency with airplanes; to Smithfield, North Carolina, to meet pilots who fly CIA aircraft; study with a planespotter who tracks CIA planes in the Nevada desert; and go to Afghanistan to visit the notorious Salt Pit prison and interview released Afghan detainees.Contradicting the Presidents depiction of the CIA program as a legal and useful tool for bringing terrorists to justice, Torture Taxi proves that the CIAs operations since 9/11 have been tainted by torture and a long series of intelligence failures.

Read the Book "Torture Taxi: On the Trail of the CIA's Rendition Flights" Online

In fact, I liked it so much that I believe every American who isn't already real hip to the CIA's extraordinary rendition program should be forced to read this book -- obstinate troublemakers who don't want to read it ought to be shanghaied to a CIA "black site" stat, and then briskly waterboarded until they comply. Of course this book was horrific and depressing, but there is something deeply comforting to me about its topic, in that I really do appreciate the moral clarity of torture. Governments should not torture people, under any circumstances, ever. In case someone forgot to tell you, let me explain briefly that "extraordinary rendition" is when the CIA kidnaps suspected terrorists in foreign countries -- with or without the cooperation of those countries' governments -- and spirits them away in private planes to a bunch of really scary places all over the world, where they then can engage in the kinds of practices that we, as reasonable, ethical citizens who uphold democratic and humane principles, abhor. A lot of these places where the CIA likes to ship its illegally kidnapped suspects are countries like Egypt and Syria: that is to say, extremely nasty countries where the governments engage in all sorts of ghastly, undemocratic things that we would absolutely never stand for here in the US of A, where we have all this great stuff like the Constitution and laws and a free press and things like that. In those evil, bad countries, the governments have taken away citizens' rights by declaring states of emergency -- like if there's a war, or terrorism or something -- and the people in charge just basically get to do whatever the fuck they want, without any checks and balances! They're bad governments because they get to do whatever awful, secret things they feel like doing, things like locking people up in prisons without due process -- you don't even get a Legal Aid lawyer there! In any case, I am definitely the kind of person who does not want to be blown up as she rides the subway to work, but I'm even more definitely the kind of person who is far more upset by the idea that her government breaks laws and tortures people, than she is by the thought that she might not make it into work one morning. We do not want our government doing these things, because morally nuanced as the world may be, it really is nice when there's good guys and bad guys, and it's nice to be a good guy, isn't it, and if we're doing the things that we're doing, then we're not the good guys, not at all, and that kind of sucks, then, doesn't it? I feel like Americans who feel okay about our government breaking laws and torturing people are really missing the point of the game. They're like little kids who cheer and want their baseball team to win, but they don't actually understand how the sport is played or what any of the the things that happen in a game mean. What makes this country a good place to live is that Torture Taxi is published, and that we all get to check it out of the public library, and its authors are still out shambling around, investigating CIA front companies and leaving commas out of things, instead of being anally raped in some Algerian prison or lying facedown among radioactive tumbleweed out in the Utah desert.

Torture Taxi by Ben Terrall / May 3rd, 2007 Torture Taxi: On the Trail of the CIAs Rendition Flights (Melville House; 208 pages), by Trevor Paglen and A.C. Thompson, is an investigation of the infamous extraordinary rendition program used by the CIA to carry detainees to countries where torture sessions are a standard part of state security. Paglen, a UC Berkeley expert on clandestine military operations, and Thompson, a George Polk Award-winning San Francisco journalist, began their immersion in this most disturbing of homeland security programs through contacts with planespotting hobbyists who noticed a series of unusual flight patterns in the western United States. The majority of Smithfield, North Carolina residents with whom Paglen and Thompson spoke, having grown accustomed to the intelligence presence in their town, did not support protestors who came to the community following public revelations of the CIA flights. A.C. Thompson told me he hoped Torture Taxi would contribute to an increase in grassroots activism pressuring U.S. elected representatives to end extraordinary renditions. Thompson notes that Democrats did not make torture an issue in the last election, and Congress is currently doing little to curb the egregious violations of basic human rights at the core of the Bush regimes gloves off intelligence operations. Jesuit priest and anti-war activist Steve Kelly is one of the U.S. activists committed to doing something about our governments widescale use of torture. In terms of U.S. government use of coercion, Fr. Kelly told me, They figure people will tolerate torture, the same way they did with nuclear weapons this idea that if North Korea has nuclear weapons, they are evil, but if the U.S. has them they are virtuous, is nonsense. In December 2005, Fr. Kelly served as chaplain for Witness to Torture, a delegation of U.S. activists who defied the U.S. travel ban on Cuba with a peaceful march to the gates of the Guantanamo Bay naval base and prison camp. On November 19, 2006 Fr. Kelly was arrested outside Fort Huachuca, in Sierra Vista, Arizona, where he was taking part in a peaceful protest against torture interrogation tactics taught at Fort Huachuca by U.S. military intelligence. An Army field manual on interrogation, the Human Resource Exploitation Training Manual, was written at Fort Huachuca, and officers and soldiers responsible for human rights abuses at Guantanamo Bay and Abu Ghraib have worked at or were trained at the Forts Headquarters for Army Intelligence Training.

Torture Taxi goes in as many circles as the CIA planes that plane-spotters track.

In fact, my interest in reading this book wasn't so much to examine the rendition program as a moral, ethical, or legal argument but due to my fascination with military and associated aviation. Paglen gets into the physical aspects of rendition in a way no other author does, writing of how people who are "plane spotters" as a hobby were the first to take note of rendition flights and the aircraft used and later, armed with the data these plane spotters jotted down, investigative journalists have been able to discern where CIA front companies actually own aircraft and work for the CIA on these missions. These are points of data that most writers on the rendition program wouldn't care about but are fascinating to aviation buffs and I also like how Paglen is not afraid to share these findings without being able to say for sure their meaningas such a meaning probably cannot be fully discerned anyways.

C. Thompson, Torture Taxi: On the Trail of the CIA's Rendition Flights (Melville House, 2006) I can't remember the last time I read a general nonfiction book in the space of twenty-four hours; I'm not sure it's ever happened before. Torture Taxi, as the subtitle tells you, is a book about the CIA's Extraordinary Rendition program, a previously-secret initiative that was brought out into the open by regular folks around the globe who started wondering about the odd flight patterns of a certain group of planes. I've never been a conspiracy theorist, but I've got to say that Paglen and his co-author, investigative journalist A. (Noisegate's music didn't, either, and that's equally criminal.) I guess I shouldn't be surprised at this, but I'm now going to attempt to change that, Torture Taxi is going to be one of the books I start recommending to everyone within earshot.

The announcement confirms charges made in a new book, TORTURE TAXI: ON THE TRAIL OF THE CIAS RENDITION FLIGHTS, the first book on the secret U.S. program.

Having said that, it's a book that needed to be written, and there is some interesting revelations about the use of front companies and ghost directors.

His second book, I Could Tell You But Then You Would Have to be Destroyed by Me (Melville House, 2007) an examination of the visual culture of black military programs, was published in Spring 2008. In spring 2010, Aperture will publish a book of his visual work.