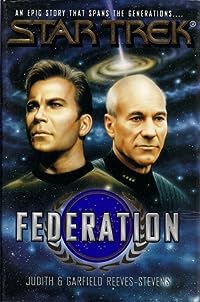 The long awaited novel featuring both famous crews of the Starship Enterprise in an epic adventure that spans time and space.

Captain Kirk and the crew of the U.S.S. Enterprise NCC-1701 are faced with their most challenging mission yet--rescuing renowned scientist Zefram Cochrane from captors who want to use his skills to conquer the galaxy.

This novel was published, presenting an original story, was a marketing tool, as part of the big event of the meeting of both captains, Kirk and Picard, on the theatrical film Star Trek: Generations that it was premiered around that date too. I was aware that it wasn't a novelization of Star Trek: Generations but a different story, only available in this prose novel. I know that eventually, William Shatner himself did his "Shatnerverse" Star Trek prose novels featuring Kirk and Picard together in almost all his books, but back then, at the time of Star Trek: Generation, it was totally outstanding to have Kirk and Picard in the same story, so this novel was quite big deal then. One of the cooler elements of the novel was that while the film Star Trek: Generations had to struggle to just have some members of the original crew (Kirk, Scotty and Chekov)... ...on this prose novel, thanks to the power of writing and no limitations of "casting" characters for the book, you have here the entire original crew and in their prime time of Star Trek: The Original Series time period, and... ...of course you have the full crew of Star Trek: The Next Generation too! ...when Zefram Cochrane will explain in a graphic way his theory of the warp travel.

I just finished reading what is probably the best Star Trek novel ever written. I knew then that it was a book I would probably re-read someday, but since I'd borrowed it from the library, I couldn't exactly keep it.

The first story-line is about Zefram Cochrane, the developer of the warp drive and occurs around 2061. In the second story arc Captain Kirk nearly 200 years later runs into the same Cochrane and some alien entity known as the Companion. The third arc has to do with Capt Picard nearly a hundered years after Kirk, and the Enterprise-D is looking for what might be a Romulan defector with access to captured Borg technology.

This book really pulls everything together and it is just such a great, feel good, and amazing story more about the Federation and its legacy than it is a single man. The man was like the Energizer bunny but it just seemed like it was getting even outside of my realm of "okay this is Star Trek novel so I'm going to make certain allowances.' Not that that much applies here anyway. Judith and Garfield Reeves-Stevens know the Star Trek world inside and out and they make their books nothing if not immersive.

I've recently been on a big Star Trek reading kick. I used to read these books all the time when I was young and loved them. Star Trek novels are basically the geeky equivalent of reading Romance novels most of the time. Every once in a while a book stands out that deals with some of the deeper themes and meanings in Star Trek.

Federation is a pretty epic story covering the events on and around Earth prior to the third world war including the discovery of the warp drive through the Enterprise under Kirk era and onwards towards the D commanded by Picard.

*Updated with an actual review* Never let it be said that there aren't any great Star Trek novels out there. So, now that I've proven, legally, that Star Trek is capable of producing some great novels, I can tell you that this should be right up there in that conversation. By which time I'll probably have forgotten that I've read this book, which was great. But that might be because I've always been forgetful but I've forgotten how bad I am at remembering stuff and so all this seems new. And like I was saying, I have read other things since I finished this book, I'm left with more of an impression than with details. Mixing Star Trek lore and using the episodes we all know and love as connective tissue in order tell a whole new tale. But it took what I thought was shaping up to be one of the greatest Star Trek stories ever told (which it still might be) and made it into simply a great one.