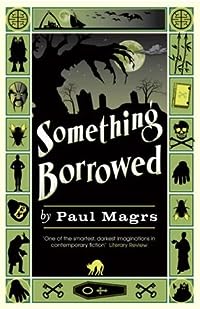 Brenda must face her demons, but first she needs to get to the bottom of the sinister goings-on that threaten to overcome an all-too-quiet seaside town.When poison pen letters start flying around the quiet lanes of Whitby, trouble is in store for Brenda and Effie. And with Jessie the Zombie Womanzee, trips down memory lane and amorous ghoul hunting, literary minded and strangely youthful professors of Icelandic history, as well as a terrifying encounter with bamboo wickerwork gods from the dawn of time, even Brendas ample cup is running over. But her most challenging battle is the one she must fight with herself or, at least, parts of herself

Read the Book "Something Borrowed" Online

Tetris, naming a band 'The Jesus and Mary Chain', and Joss Whedon making his vampire slayer a hot young Valley girl are great ideas. As any number of poor tv shows demonstrate, trying to copy Joss Whedon leads only to crass scenes of alien sex in toilets and tedious yawnfests aplenty - and Paul Magrs isn't the pinching ideas kind of writer in any case. Other writers work isn't so much grist to his mill as an odd kind of mulch fermenting in his head, being subsumed and broken down to its constituent parts before being launched back into the fresh air as something virtually unrecognisable (that sounds a bit arty-farty, I know, but this is my literary review head:) Which brings me neatly to Magrs new book, 'Something Borrowed', the sequel to 'Never the Bride', in which all manner of dark and forgotten creatures come burrowing back into the light of day to menace our heroines, Brenda and Effie.

Not having read the first book (soon to be rectified) I was a little behind with Brenda and Effies story, but Magrs (pronounced Mars apparently) very thoughtfully included enough references to the two ladies first adventure (Never The Bride) that I was very soon fairly up to date. In Brenda and Effie Magrs has created two wonderfully idiosyncratic characters who manage to blunder their way through a plot full of overflowing with vampires, zombies, stray body parts and a set of possessed furniture, all set against the gothic spookiness of Whitby. In Something Borrowed the town itself is as much a character as Brenda and Effie and their assorted friends and foes. Something Borrowed has everything I could want from a book captivating characters, recognisable setting, great plot and plenty of humour, all told with style and wit.

This is the second in a series of books written by Paul Magrs which mixes classic horror with fantasy and black comedy, to create one of the most imaginative literary worlds I have ever found myself absorbed in.

I wasn't bowled over by the first book but I remember having a good impression of Brenda and Effie. The best part of this book is definitely Brenda and Effie's friendship. The story revolves around Brenda and the weird happenings in Whitby town. There is a string of poison pen letter incidents in the town and Brenda and Effie are on the case. Henry was the sacrifice and Brenda came through and saves him. The book ended with Brenda's husband sending her a letter declaring that he would return for her.

Sure, growing up with a family of powerful witches, you know about "other" things, but dating Dracula and watching a hell mouth open change your priorities. Without consulting Brenda, Effie has got them a case investigating a string of poison pen letters. Lucky for Brenda and Effie, their now significantly transformed friend Jessie's nephew Robert works at both hotels and is will to help in their investigations when not tending to his womanzee aunt Jessie. With a beer garden with evil undertones and a rampaging womanzee, sleep deprivation and things that scuttle in the night, surprisingly it's a man from Brenda's past that upsets the precious balance of life in Whitby. At first I was not sure if I would love this second book in Paul Magr's Brenda and Effie series as much as I did the first installment. Little sweets of stories that take place in Brenda and Effie's lives. Also, learning more about Brenda's past, and her working as a housekeeper and maid back in 1946, makes sense with her continued love of a clean home. Her run in with Dracula way back in the day makes sense as to her prejudice against him when he previously was in Whitby and courting Effie.

I made a comment in my Never The Bride review that Something Borrowed is much more written in a style similar to that of a movie, where its prequel was definitely a more TV monster-of-the-week/mytharc style. At the beginning of the story, he is introduced as someone from Brenda's past, and by the end of the novel, it turns out he was just there to solve a case about Goomba, and he is gone again. And he does some wonderful things for Brenda's character, allowing us to see who Brenda was-- that she was always an old busybody who liked to get involved in nefarious schemes fighting bamboo monsters from the Dawn of Time. I feel like this review will continue to go on with me giggling about the wonderful parts, and totally beating out the good things with minor niggles about the story as if they are some dramatic book-ruining experience, so I will stop myself here. I do, however, want to say that while it is definitely overshadowed by what comes before and what comes after, it is an enjoyable book, and would never say no to re-reading it.