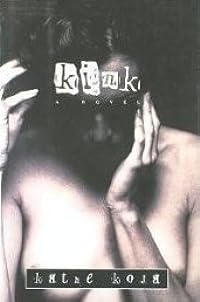 Koja's uncanny blend of eroticism and gothic hallucination, her unabashed readiness to take on the larger issues of the human condition, and her sheer lyricism as a prose stylist have set an ambitious standard by which other writers of her generation must be judged. Kink explores the many dazzling facets of obsession--intellectual, emotional, and sexual--created and refracted by the ever-changing dynamics of a three-way relationship between a man and two women.

To quote my review, ahem aheeeemmememehghsgdh: he offered "a cool perspective on how our brains automatically flip past phrases like "he said" when reading, and how the writer can use this to their advantage (or, at least, accept it as inevitable -- not every sentence can or should be beautiful)." With Kathe Koja, every fucking sentence is beautiful. I was going to say with every word carefully selected, but I don't want to believe that's how Koja writes: cause she reads like she's channeling cosmic background radiation or some shit into her sentences. You don't need to know much going in, so I'll steer away from plot: but suffice to say Koja takes her concepts and draws them to their emotional (if not logical) conclusion. Koja is a blood writer, man, and Eco would fucking hate her.

Kathe Koja, Kink (Henry Holt, 1996) Kathe Koja's fifth novel, and her last (to date) book for adults, came and went in the blink of an eye. Kink, coming after the two perfect novels Skin and Strange Angels, could only be a letdown, right? Kink is, as any fan of Koja's is probably happy to hear, a work of brilliance just as blinding and extreme as Strange Angels (or Straydog, the book that came afterwards, with six long years between the two). Ultimately, that's what Kink is about; the rest of the world (including the novel's readership) is clearly capable of seeing this from the get-go, while Jess is too thick-headed to get it. The realism here goes well above and beyond that to be found in Skin or Strange Angels.) Jess' inability to see what's going on around him is relatively understandable, as he's blinded by both his love for Sophie and his passion for Lena; he does make some hall-of-fame-worthy stupid moves at various times, which to be fair have to be rationalized away. Strange Angels, as I have often said, is one of the three or four best novels in the English language; "not as good" means Skin and Kink fall somewhere in the top, say, twenty-five.

Very little sex is actually described in the book, and it's certainly not kinky sex.

You know that feeling, when you idolize that person's surface and want their same appeal and talents... then shortly thereafter you see a really ugly tabloid surface about said person's inappropriate behavior that makes you remember we are all just silly little imperfect humans.... I stayed up till 1:30 am burning through this because I fell straight down the down spiral with the main character. I have one more Kathe Koja book to read (Bad Brains) and then I will be done with her adult novels.

The passage of time, though, has only made more of the details of the book fade on me, and I feel even less able to review it now than I was when I finished it. But now, problem: who has time and space to read every worthy book twice?

The book spends its modest duration exploring Jess's head through the course of this relationship and its various highs and lows. What I'm trying to say, I guess, is that Koja probably made Jess as terrible as he is for a reason, and it worked in the way she intended. Koja does some things pretty well, however: the prose is written in a semi-stream of consciousness style with Jess frequently interrupting himself, and gives the book a sense both of confusion and immediacy. The dialogue is also fine, and as I mentioned, I thought the other two characters were pretty interesting and well-developed, though maybe just in comparison to Jess. With such a straightforward plot, this book needed some amazing characters and fantastic prose, and it had neither of those things. I'm still going to read The Cipher, because hopefully the more interesting plot of that book will combine with Koja's prose to make it a very enjoyable experience.

This is a book for anyone who has gone through a break up of a "happy" relationship. That is not the interesting part in the book. This is a really beautiful book when it starts falling apart.

This is the story of Jess and Sophie....and eventually Lena. I did like Jess and Sophie but I wished the whole book was about their relationship - just them (or with a 3rd that was nice).

This is kink in the twisted sense and it requires a much deeper appreciation of humanity than some whip happy vocabulary deficient author could ever hope to create.

VELOCITIES, her second short fiction collection, is upcoming in 2020 from Meerkat Press, along with a reprint of her classic novel THE CIPHER.