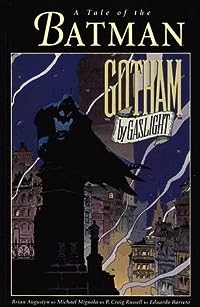 Once his training is complete and he started his personal war on crime Jack the Ripper arrives to his city! The terrible path of blood that started in Whitechapel, London, is beginning once again in the dark streets of Gotham City and its up to the Bat-Man to face his baptism of fire in his war on crime. However, thing wont be easy, since the citizens of Gotham dont know who inspire them more fear Jack, the Ripper or this mysterious Bat-Man. MASTER OF THE FUTURE A year later of the previous events, in the first part of the miniseries Bruce Wayne feels that his personal oath to his parents have been fulfilled and even he has now a fiancé, Julie Madison, so the Bat-Man costume hasnt seen action since a while.

Aside from Mike Mignola making Commissioner Gordon look like drunk Teddy Roosevelt from the Hall of Animatronic Sex Panther Presidents, the art is quite good in the first tale (the book contains two stories, the second of which is not as goodartistically or plotisticallyas the first). Bruces showdown with Jack the Ripper (whose identity, semi-spoiler alert, is as disappointingly weird as calves foot jelly, though it did make me feel slightly better about the characters horrifically misogynistic approach to life when he was revealed to be a man who rips the entrails from prostitutes, though its entirely possibly his misogyny was less a product of an exceedingly disturbed mine prone to bouts of unimaginably graphic violence and more a reflection of acceptable dialogue in comics in the late 80s), though, is only mildly diverting, with Bats acting like kind of a ninny as he stews in a prison cell for much of the second half of the story.

Look, when I see something claiming to be some alternate reality Batman, I immediately assume it will be 'fine'.

So the rest of this Listen to that phrase: "steampunk batman." What a lovely phrase it is! Especially when Jack the Ripper is also involved. We've seen it a million times before (and executed far better) in other Batman tales. Our glimpses of Batman are few and far between and none are particularly cool looking. In short, this Batman comic was a complete waste of the brilliant potential in terms of both its story and its art.

With (seemingly) well researched history to match, this story would seem unique and enjoyable, until we linger too long and finally read beyond the first ten pages. Because the first ten-to-twenty pages are merely world-building, instead of forging a plot with increasing tension, this does nothing than more than establish what we know already with merely altered visages to match the (Sign o The) Times. The hopes and dreams of this profound epoch are disappointingly unseen as montage after montage establish the already known-knowns of the Batman character. Instead of touching upon important historical happenings within the contextualized peripheries, their lack of research further degrades their usefulness to the comic with excessive repetitions amounting to vapid redundancies.

Reading Bryan Augustyn's self-contained story Gotham by Gaslightunearth those nostalgic feelings. This fifty-paged comic book is set in an alternate universe where Bruce Wayne, Batman and Gotham City are in the nineteenth century. Gotham City itself after all has that kind of vibe already--something so ancient and dark that you always feel a chill in your spine when you're reading about it.

During the late 1980s and early 1990s Augustyn was an editor for DC Comics, where he edited The Flash, Justice League and the Impact Comics line of titles. As editor of The Flash beginning in 1989, Augustyn brought in Mark Waid as writer in 1992, which led to an acclaimed eight-year run.