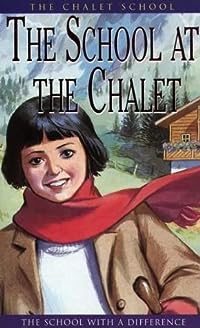 The School at the Chalet

When Madge Bettany sets up a school in the Austrian Tyrol, her sister Joey is among the first pupils. From small beginnings, it grows rapidly, enjoying all sorts of exciting adventures and mishaps.

Read the Book "The School at the Chalet" Online

The first set is the beginning of the school, which is a boarding school that Madge Bettany, all of twenty-four years old, starts in the Austrian Tyrol, while her sister Joey becomes one of the first students. The second set takes place some fifteen or twenty years later, when Madge and Joey and a bunch of former students, of course, have children attending the school.

Brent-Dyer's The School at the Chalet is the first entry in one of the most popular British school-story series ever to see print, a series that ran for over forty years, and eventually grew to include close to sixty titles. While certainly not what I would describe as a particularly gripping children's novel, The School at the Chalet is a pleasant and entertaining read, with a charming international character that no doubt accounts for its broad appeal. Addendum: Having just reread this, for a group discussion in the girls' school-story group that I run, I have to say that I was more conscious of Brent-Dyer's use of national stereotypes - from the emotional French to the obedient Austrians and Germans - this time around.

This is a well written, well paced, and engaging story, the first of many in a long series about a boarding school in the Austrian Tyrol. Im really glad that I got an unabridged copy, a facsimile reproduction of the original edition. I really enjoy Joey and Madge and so many of the other characters, and Im curious to know what happens to them; I would guess quite a bit given how many books follow this one.

I read the entire Chalet school series when I was young. I re-read this - the very first Chalet school book just recently and was charmed by its ability to still evoke my childhood enjoyment.

They plump for setting up a school in the Tyrol because it's cheaper than Britain and of course Jo is "delicate" and the mountain climate will do her good. It is true that many girls of good family of the time had to make do with a governess, and perhaps a year or two at a boarding school which might have as few as a dozen students per term.

Starting with only one pupil (besides Jo), the school soon attracts new pupils and quickly becomes an educational force to be reckoned with.

So focus is on the young headmistress Madge and her attempts to start the school. So the individual events just pass like specks.

Elinor was educated at a small local private school in South Shields and returned there to teach when she was eighteen after spending two years at the City of Leeds Training College. In 1933 the Brent-Dyer household (she lived with her mother and stepfather until her mother's death in 1957) moved to Hereford. Elinor's mother died in 1957 and in 1964 she moved to Redhill, where she lived in a joint establishment with fellow school story author Phyllis Matthewman and her husband, until her death on 20th September 1969. Brent-Dyer published 101 books but she is remembered mainly for her Chalet School series. In 1994, the year of the centenary of her Elinor Brent-Dyer's birth, Friends of the Chalet School put up plaques in Pertisau, South Shields and Hereford, and a headstone was erected on her grave in Redstone Cemetery, since there was not one previously.