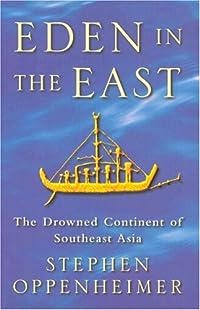 Eden in the East: The Drowned Continent of Southeast Asia

At the end of the Ice Age, Southeast Asia formed a continent twice the size of India, which included Indochina, Malaysia, Indonesia, and Borneo.

Read the Book "Eden in the East: The Drowned Continent of Southeast Asia" Online

'Suddenly its kind of crystalized that the center of diversity for archaic populations is in Islands Southeast Asia, says study co-author Murray Cox of Massey University, New Zealand, referring to the Philippines, Malaysia, and the other archipelagos that make up the vast maritime region of the Asian subcontinent.'" *** Five stars for times it comes to mind ... Depicts the now underwater world of East Asia, where I speculate Sapiens created the first Civilization, dating to the Great Flood ... From the Wiki about Oppenheimer - "In his book Eden in the East: The Drowned Continent of Southeast Asia, published in 1998, Oppenheimer makes a case that the rise in ocean levels that accompanied the waning of the ice ageas much as 500 feet (150 m)during the period 14,0007,000 years ago, must be taken into account when trying to understand the flow of genes and culture in Eurasia. ..." *** page 10 - "At the height of the Ice Age around 20,000-18,000 years ago, Southeast Asia formed a continent twice the size of India, and included what we now call Indo-China, Malaysia, and Indonesia. The flat land area lost by Sundaland. The flat land area lost by Sundaland after the Ice Age was as large as India. "This book discusses the possibility that when the final dramatic rise in water-level occurred between about 8000 and 7500 years ago, the last of a series of emigration routes went south towards Australia, east towards the Pacific, west into the Indian Ocean and north into the Asian Mainland.

But I was reading more for the subject matter: about the possibility of a South East Asian continent that was the original cradle of civilisation, before it was drowned by rising water levels at the end of the last ice age.

After I read The Forgotten Exodus: The Into Africa Theory of Human Evolution in which Bruce Fenton presents his argument for the evolution of Homo sapiens from the Homo erectus population of Southeast Asia, his argument well-supported by archaeological and genetic evidence, I thought it a good idea to read Stephen Oppenheimers Eden in the East: The Drowned Continent of Southeast Asia, though not strictly as a follow-on, since it was written some 20 years earlier. In Eden in the East Oppenheimer sets out to prove that, displaced by a catastrophic flood ca.8,500 years ago, many of survivors from Southeast Asia, notably those from the drowned coastal lands of the former Sundaland, took to their sea-going canoes to find new homes, taking with them their myths, and their potentially more advanced technology. However, Oppenheimers argument pertains only to the rapid rise in sea-level at the collapse of the Laurentide ice sheet ca.8000 years bp. Yet without this evidence, he still puts forward enough for me to accept that it happened, and to the extent said, i.e. a total rise in sea-level of 120 metres (500 feet) from the greatest low at the time of the last full glacial (20,000 years bp). But disregarding the evidence used, in my opinion his argument would have been better supported with effective graphics; a complaint that surfaces throughout the book, but most notably in this next section. I have followed the past fifty years of discussions and arguments regarding the origin and spread of the Indo-European languages, then to watch the few gloat over the others when ancient genetics appeared to seal their case. So I was aware of the importance of genetics in his argument, but at the same time, I echo those archaeologists who stress that language doesnt come with our genes. Alas for Stephen Oppenheimer, that he had no recourse to modern genetics, and certainly not to ancient genes. Though, I admit, there are a few myths in Frazers Great Flood that do not conform. And that, in my opinion, is an overlooked fact in the work of Stephen Oppenheimer.

In a couple places, he buttresses his case with statistical correlations of motifs occurring together, but those statistics are weakened by selective interpretation of the myths (e.g., any mention of vegetation becomes a tree) and by omission of South American myths (perhaps unknown to him at the time) which include several of the same motifs.