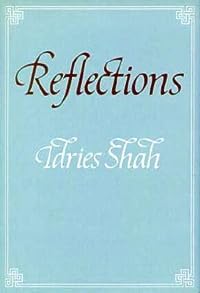 Small in size, but with a powerful punch, Idries Shah's Reflections is a collection of fables, aphorisms, and statements that challenge the conditioned mind.

The best ones are delineations of what happens in real life, in the community and in the individual's mental processes'.

Prejudice is the symptom; wrong assumptions are the cause.

Of all the pocket book-type works on the market offering nuggets of traditional wisdom (I have read many of them) this has to be the most genuine and far-reaching in impact.

He mentioned denial, a subject receiving much attention today. Denial and affirmation are games which people play. And a warning about the dangers of failing to develop tolerance: Tolerance and trying to understand others, until recently a luxury, has today become a necessity.

A small blue book that can fit easily into a pocket, Reflections contains more wisdom and practical sense than many much larger tomes. Here is one piece: CONTRARIES Try to remember, as a corrective against automatic assumptions, the story of the wise dervish and the mother. 147 pgs., hardcover Reflections is a small book chock-full of wisdom and good sense. It seems that these reflections have been collected because, in the words of the Foreword, they are 'delineations of what happens in real life, in the community, and in the individual's mental processes.' The tone is upbeat, and often challenging: challenging of one's assumptions and comfortable patterns of thought, that is. 'I have been honoured by my acceptance as a pupil,' he said, 'singled out from among the hundreds who approach my master every day, and yet are sent away.' 'My dear brother,' said the Grand Sheikh, 'I will try to further your education by giving you a piece of essential information. You were chosen because of being in the greatest need of teaching, not because of qualities greater than those of the other applicants.' And as one might expect from a book by Idries Shah, there are also some very funny sections, like 'Two Gurus' or 'Grit.' The section 'Golden Rule' challenges cherished assumptions about that concept -- and indicates something of the subtlety of traditional psychology. This seems ubiquitous, but is exemplified in 'Manoeuvring' (which helps uncover people's real motivations), 'Opinions' ('Do not ask people how they arrived at their opinions if you want the truth.'), 'Report on the Planet Earth,' 'Being,' and 'The Intelligent Man' (in part a warning against diffusing one's attention and effort too much). Again: the best thing is to get and read the book itself.

When you really face a problem and see it clearly, you realise that it is not the door and its shutting which are significant, but the presence and condition of a lock.

This compact book contains over 280 small tales, thoughts and proverbs holding up a mirror to the limits that our culture transmits about thinking, understanding our self and our relationships with others. By way of example he uniquely suggests proverbs need to be kept in proper repair or succeeded with more relevant ones. The limitations on our ability to think clearly imposed by a score of deteriorated proverbs are illustrated.

In each reading, certain passages (quite often different ones from the previous reading) stand out, strike me powerfully, and help me to understand myself and the world I live in a little better.

With propositions, questions, challenges and statements as short as a single sentence, to tales extending over several pages, Reflections will fill you with hope, buffet you with self doubt, turn your thinking around, perplex you, intrigue you and encourage you to question the arrangement of your whole interior world.

Idries Shah (Persian: ), also known as Idris Shah, né Sayed Idries el-Hashimi (Arabic: ), was an author and teacher in the Sufi tradition who wrote over three dozen critically acclaimed books on topics ranging from psychology and spirituality to travelogues and culture studies. A similar organisation, the Institute for the Study of Human Knowledge (ISHK), exists in the United States, under the directorship of Stanford University psychology professor Robert Ornstein, whom Shah appointed as his deputy in the U.S. In his writings, Shah presented Sufism as a universal form of wisdom that predated Islam. Idries Shah's books on Sufism achieved considerable critical acclaim. Some orientalists were hostile, in part because Shah presented classical Sufi writings as tools for self-development to be used by contemporary people, rather than as objects of historical study.