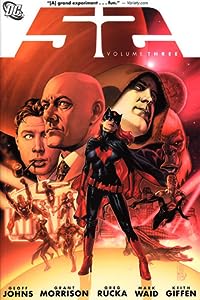 After the INFINITE CRISIS, the DC Universe spent a year without Superman, Batman and Wonder Woman -- a year in which those heroes were needed more than ever as the fate of the world hung in the balance.

Anybody remember him? Like I mentioned in my review of volume 2, this is edgy stuff. (edit - um, please bear in mind that I wrote this before my re-read of Vol. 4) I could never quite understand how this invasion force could be so powerful that the Green Lantern corps seemed unable to stop it. There could easily have been a future for this character in DC comics but wait? Best bit: Supernova revealed!

THE SERIES This tale follows a missing year in the DC Universe after the groundbreaking Infinite Crisis story (see my review for that one) which was one of the bestselling graphic novels for the 2006 year. Note that "Final Crisis" follows after this and was published in 2009. That writing team was: Greg Rucka, Mark Waid, Keith Giffen, Grant Morrison and Geoff Johns. Bruce Wayne tried to find himself in the desert and meets a long lost supervillain from old DC times (I only knew that because I read the commentary). The Green Lanterns have some serious problems off Earth, Ralph Dibny and Supernova link up and the Teen Titans consider accepting someone from the Black Marvel Family (but some people do not want that to happen). Heh. The Black Adam Family gets ambushed, Luthor's plans for his superheroes starts to become evident and several superheroes respond to the crisis which follows.

The end-game is clearly starting up, seen most clearly in the plot-lines of Renee Montoya and The Question, Steel and Luthor, the happenings on Oolong Island and the reveal of the identity of Metropolis' mysterious new savior, and the Intergang arc. The panel at the end of that arc, with Animal Man literally "meeting his makers" was interesting as well (although I had to look up who they were). The first is the lack of an overall story - yes, various plot-lines proceed nicely, and crossover time and again (such as the very effective meeting between Ralph Dibney and 'Supernova') but I just don't see how they come together in a coherent super-structure plot/ story. Anyway, if you've come as far as 52 vol 2, and are a DC fan who doesn't need Superman/ Wonder Woman/ Batman turning up at the end of every tale like dei ex machina, this one is a must read...

On one side I can't wait to get my hands on the last volume of this series because it's absolutely amazing. We get to see some big stuff happen in this book, some real "holy balls of sweet Babylon" moments. Some plots where looking like they were being wrapped up, then they took a big u-turn and royally threw me off guard. One of the biggest highlight's for me was seeing one of my favourite teams in the DCU turn up, the mighty Suicide Squad! Looking forward to seeing where that goes, I'm hoping for a confrontation with Clark at some point.

It's frustrating that it's not really congealing, or at least it doesn't seem like all of these elements are coming together in any real and meaningful way, and we're at the point in the epic narrative where everyone is scattered to the four winds and most of the time is spent checking in with them and making small steps forward instead of leaps that are a bit more meaningful. This book has so much possibility for what it might be there's no real sense that anyone took the time to figure out what the best way to spend the whole year. The ONLY story that has justified its extended run time is Renee Montoya's, and even then I feel like Charlie's been on death's doorstep for about six weeks.

Ralph Dibny's journey with Dr. Fate also lends to some surprising moments, including a run-in with the Spectre that (painfully) allows Ralph to witness the murder of his wife. Ralph's spiritual journey, in many ways, draws parallels with Renee's.

He worked with Richard Donner for four years, leaving the company to pursue writing full-time. Since then, he has quickly become one of the most popular and prolific comics writers today, working on such titles including a highly successful re-imagining of Green Lantern, Action Comics (co-written with Richard Donner), Teen Titans, Justice Society of America, Infinite Crisis and the experimental breakout hit series 52 for DC with Grant Morrison, Greg Rucka and Mark Waid.