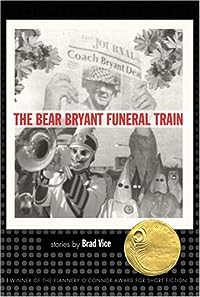 In these nine wistful and mordant, humane and brutal stories, Brad Vice leavens his own sympathetic inclinations with exquisitely timed, self-inflicted jolts of southern gothicism.

Ranging widely in place and time - small-town Texas or Disney's Magic Kingdom, the Great Depression or some future, postpetroleum economy - Vice's stories are likewise rich in their variety of characters: a grieving but well-to-do cookbook author, an aged farmer with dirt under his nails and black magic in his soul, a software engineer dabbling in corporate espionage.

In Report from Junction, a football scholarship to Texas A&M is Kurt Schaffer's best hope to escape a life spent riding fence lines under the killing sun.

However, the Aggies have just appointed a new coach, Paul Bear Bryant (who moves in and out of a number of these stories, both in body and in spirit).

Daily news dispatches of the Bear's brutality leave Kurt wondering what else life may offer but pain and hardship.

Plenty, would be Brad Vice's reply.

The Bear Bryant Funeral Train, The crucifixion of an American Writer, Brad Vice Brad Vice I know Brad Vice, he's a native of my home town, Tuscaloosa, Alabama. Around here we call his folks, "Good People." His father, Leon was a County high school history teacher, and his mother, Dorothy, was a radiology technician in our largest hospital, Druid City Regional Medical Facility, otherwise known as DCH. Brad was born in 1973, about time I was ready to graduate from the University of Alabama. One which he was awfully proud of, until he published his first book of nine wonderful short stories, The Bear Bryant Funeral Train. Brad's dissertation consisted of the nine stories that appeared in The Bear Bryant Funeral Train. In late 2004, the University of Georgia Press awarded Brad Vice the coveted "Flannery O'Connor Award for Short Fiction. Subsequently the UGA Press published the book in 2005, an image of which appears above. Vice's unblinking irony to portray Bryant as a young Klansman would be enough to get him run out of T-Town to this day. Finally, Vice's title piece,"The Bear Bryant Funeral Train" is a blend of true iconism and how the icon becomes legend. Vice spent many summers working on his father's farm near the Mississippi State line. In the October 21, 2005 edition of The Tuscaloosa News, the following article by Entertainment Editor Mark Hughes Cobb appeared: BOOK'S PASSAGES RAISE QUESTION OF PLAGIARISM UA Press doubts originality of work by UGA Press "A minor third in Tuscaloosa Knights" rang familiar to Margaret Butler. The first story of Brad Vices story collection The Bear Bryant Funeral Train" begins with a passage about a bugle blast that drops a minor third on a long wailing note." On the first page, I said to myself, 'Ive read this before, " said Butler, who as readers adviser to the Tuscaloosa Public Library picks up everything literary about the Druid City. Specifically, she heard echoes from one of her favorite books, Carl Carmers 1934 Stars Fell on Alabama": Those three bugle blasts, then a drop of a minor third on a long wailing note." I knew immediately," Butler said. Before the smoke cleared, the stalwart administration of the University of Georgia rescinded its O'Connor Award and called for all copies of the book to be sent back to the University Press where all copies would be pulped. The only thing that would have made it perfect was having Brad Vice's signature. I didn't feel too guilty about it, either, because I read Vice's story ,"Tuskaloosa Knights," then compared it to Carl Carmer's 1934 chapter, "Tuscaloosa Nights." There was no attribution. Then, in March, 2007, local press River City Publishing of Montgomery, Alabama, pluckily published a very nice paperback edition of "The Bear Bryant Funeral Train." Ready for the punchline? It was about 1:00pm on a sunny April Afternoon, when I met Brad Vice, face to face for the first time. It would be too..." "Academic?" "Yes. Exactly." "And UGA wanted to sell those books, didn't they?" "Well, I suppose..." "Mr. Vice, we all know they wanted to make money of your writing. But I had no idea that a University Press would delete attributions to the degree that it would appear that I had stolen someone else's work." "Of Course not. Tell these folks where you first read Carmer's "Stars Fell on Alabama." "My father had a copy of it." "Why did he have it?" "The chapter about Ep the fiddler, well Ep was my great Uncle." "So you'd read the book?" "Of course. Mr. Vice, you'll answer anything, right?" "I sure will." There were eyes darting all over the ground. Sincerely, Brad Vice, Alabama Festival of the Book, April, 2007." What are they worth? 1. "Books passages raise questions of plagiarism," Tuscaloosa News, October 21, 2005 http://www.tuscaloosanews.com/apps/pb... 3. "The literary lynching of Brad Vice" by Jason Sanford http://www.storysouth.com/comment/200... 4. "THE STRANGE CASE OF BRAD VICE: In defense of a destroyed treasure" by Michelle Richmond, The Oxford American, Issue 55. 5. Brad Vice's Doctoral Dissertation, http://etd.ohiolink.edu/view.cgi?acc_... 6. "The Bear Bryant Funeral Train," by Brad Vice, River City Publishing Co., Montgomery,Al., 2007 (for a comparison with Vice's Doctoral Dissertation. 7. Flaming Cross from "Stars Fell on Alabama" by Carl Carmer, reprinted in Thicket Magazine, http://www.storysouth.com/thicket/let... Although the original hardback has been "pulped" and copies are pricey, I do recommend the River City Press reprint, readily available with Brad's complete attributions which were deleted by the Georgia Press. I'm also posting this again for the benefit of Brad Vice, whom I have been told is not writing because of his experience, according to his mother.

I was scheduled to review this book for the Alabama Writers Forum when it was outrageously recalled in Oct. 2005. Unfortunately, the book will always be tied to its peculiar textual history, which is unfair.

I think the stories in Vice's book that are good are really dynamite.