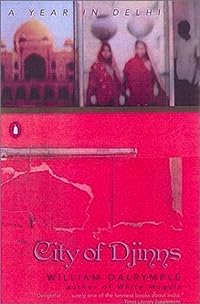 City of Djinns: A Year in Delhi

Underlying his quest is the legend of the djinns, fire-formed spirits that are said to assure the city's Phoenix-like regeneration no matter how many times it is destroyed.

Entertaining, fascinating, and informative, City of Djinns is an irresistible blend of research and adventure.

Read the Book "City of Djinns: A Year in Delhi" Online

1857, when the Mughal Empire finally fell, and 1947, when the British Indian Empire was dissolved and the territory partitioned into India and Pakistan. While some authors might present this as a bald historic fact, Dalrymple instead lets us share in his growing realization over quite how much of the city's population left, arrived, or was radically changed by Partition. Ali loathes the whole idea of Pakistan; indeed the only country he seems to hate more is post-Partition India itself, to the extent that when a flight he was on had to make an emergency stop in Delhi, he refused even to get off the plane. That civilization flourished for one thousand years undisturbed until certain people came along and denied that that great mingling had taken place. This sense that the city has created a constant stream of such refugees throughout the years, whether physically or mentally, is central to Dalrymple's understanding of Delhi. The Brits that Dalrymple can find who had lived in colonial India show a hilariously skewed kind of imperious equanimity over Indian independence. And the few Brits still remaining in-country show the sort of bizarre false memories of "the motherland" common to all such colonial relics (I've met some similar people myself in Kenya) The dish I like is that Kentucky Fried Chicken, confides one man as he reminisces about a couple of trips to relatives in Suffolk. Dalrymple offers up this obituary from the Hindustani Times as a minor classic of the genre: SAD DEMISE With profound grief we have to condole the untimely passing of our beloved general manager MISTER DEEPAK MEHTA, thirty four years, who left us for heavenly abode in tragic circumstances (beaten to death with bedpost). In particular his long, delicate attempts to get first-hand interviews and experience with Delhi's hijra community representing a kind of fusion of transgender identity with India's eunuch tradition are amazing, and result in some remarkable testimony from within a very closed and secretive subculture.

City of Djinns: The Readers Journey I started reading The White Mughals sometime in an auto in Lucknow, in 2011. I have no way of explaining how that logic worked, but, it probably went something like this - only after the Last Mughal could White Mughals come into the story. This book was the least alluring - ancient Delhi was more fascinating to me than contemporary travel writing. City of Djinns: The Writers Journey Dalrymple plots his own journey (from childhood almost) of sifting through the endless layers of Delhis historical stratigraphy and historiography. The reader should keep in mind that this is early in Dalrymples own love affair with Medieval India. A simple technique of transposition of place and time - Dalrymple first talks of a place that he himself is visiting and then effortlessly takes us back centuries to show what momentous events were transpiring in that same now innocuous piece of land exposing the grand history in which daily life of great cities are lived. He follows this contradistinction between the communities and arrives at the answer that partition is what made todays delhi a city of contradictions. He asserts early in the book: The more I read, the more it became clear that the events of 1947 were the key to understanding modern Delhi. This explained why Delhi, the grandest of grand old aristocratic dowagers, tended to behave today like a nouveau-riche heiress: all show and vulgarity and conspicuous consumption. In pursuit of the Old Muslim glory of the city D reaches Karachi and is thus introduced to even stronger nostalgia for the lost Delhi of before partition, a bi-imperial city. Soon however, D abandons the idea that this story explains Delhi. Step 2: The Imperial Past / The Raj: Digging up The Elephant in the City Multiple strands: - the vast Lutyens architecture - the inhuman scale - the adaptations from Mughals - ferreting out of anglo-indians (a favorite method of D to recapture the flavor of living in that layer of Delhi - employed throughout the book until the layers get too ancient for the method) - the exploration of the sub-delhis, the imperial summer outposts of Kashmir and Shimla. Excerpt: Considering that Lutyens managed to fuse Eastern and Western aesthetics more successfully than any other artist since the anonymous sculptors of Gandhara (who produced their Indo-Hellenic Buddhas in the wake of Alexander the Great), his dislike of Indian art and architecture is particularly surprising: Moghul architecture is cumbrous ill-constructed building, he writes in one letter. Moreover the city - so I soon discovered - possessed a bottomless seam of stories: tales receding far beyond history, deep into the cavernous chambers of myth and legend. Step 3: The Long Twilight Thus, D soon comes up with another key to Delhi: the Twilight. This time he is closer to the mark - much of modern Delhi is an outgrowth or a reaction to this periods history and architecture. If we extend this and add the next great disaster, modern Delhi would appear to take shape, even though D does this in reverse, it is easy for the reader to do the mental jugglery. Step 4: The Epic Past Unfortunately, Delhis history fades away quickly into legend past the twilight. Step 0: Tracing a City: The Present So, how does all this come together? The eunuchs in the Old City, some speaking courtly Urdu, might not have looked so out of place under the dais of the Great Mogul. Driving up the dry riverbed was like looking at a section of Professor Lals stratigraphy: on the way we drove through millennia of Delhis history, the detritus of city after city spaced out on the old river bank. Leaving Lutyenss broad twentieth-century avenues we passed by the Purana Qila, the early Mughal addition to Delhis bastions; after that we passed the shattered domes of Feroz Shah Kotla; then the magnificent walls of the Red Fort with their great ribbed chattris; and finally we drove under the walls of Salimgarh, the old Bastille of Delhi. As Mr Prashad explained when we were leaving: You see actually in India today no one is thinking too much about these old historical places.

I read it while visiting a friend who was also spending one year in India as a Fulbright scholar. She was sharing an apartment in South of Delhi with other Fulbrighters, and that apartment had become as a kind of warm and welcoming consulate-refugee camp for any friend or friend of friends going through India.

The book covers an amazing spectrum though, and of course different bits of it will appeal more or less to different people. (view spoiler) At one point , when the Dalyrmples have visitors staying, she counts how often the loo is flushed during the night. 'You are going bald.' 'Only a little bit, Mrs Puri,' I said defensively, knowing she was speaking the truth. It's not unusual for the Scots to begin to thin out a bit at that age.' 'Well,' said my landlady.

A mystic explains to William Dalrymple that Delhi is a city of djinns. Newly married, William Dalrymple and his wife, the artist Olivia Fraser, move to the Sufi neighborhood of Nizamuddin in New Delhi and set out to explore their adopted city. The first veils of history that Dalrymple must part to understand the city and hear the whispers of the past are the veils hiding memories of the Great Partition that tore India apart at the very moment of her birth as an independent nation. In layer after ancient layer; story after story, Dalrymple lets us hear the murmuring of the djinns and the voices of Delhis many peoples. Sometimes prompted by a conversation, at other times by the discovery of yet another ancient building crumbling into dust, we journey to the British Imperial India of Lutyens; to the early days of the East India Company; to the waning decades and tragic end of the Mughal Empire in 1857; to the Golden Age of Shah Jahan; and far, far back to the Tughluk dynasty that ruled nearly all of India from Delhi in the 14th century. City of Djinns is only Dalrymples second book. Dalrymples later outings, including the superb White Mughals: Love and Betrayal in Eighteenth-Century India and The Last Mughal: The Fall of a Dynasty: Delhi, 1857, explore Indias history with greater depth and scholarly assurance. Still, Dalrymples many fans as well as lovers of all things Indian should not miss City of Djinns; it is an atmospheric classic and almost as wondrous as being in Delhi yourself.

Based upon the letters that they wrote back home, various British civil servants like Metcalf, Lutyens, Fraser, have been pictured and their distinct approaches towards India and Indians has been well illustrated. Only the vanity of an Empire- an Empire emancipated from democratic constraints, totally self-confident in its own judgement and still, despite everything, assured of its own superiority-could have produced Lutyens's Delhi" And about Fraser, who acquired the Indian traditions & customs and mixed enthusiastically with the common gentry, Dalrymple quotes Jacquemont's memoirs...

How he deals with the shrewd Punjabi landlady Mrs Puri, or the refreshingly funny stories with his cab driver Balvinder Singh, amidst the noisy, heavily populated, sweltering hot Delhi, turn this into a book a reader can relate to, rather than just another bland volume of history. To a reader, a travel enthusiast and a history buff, I highly recommend City of Djinns for the delightful book that it is, and to a Delhi-walla, for getting to know his Dilli better.

There's more to Dehli than curry and he picks it apart to reveal the fascinating, multi-layered history beneath the stereotypical surface.

I kept running into William Dalrymple's City of Djinns, which Brown is quoted in the accompanying squibs as saying it was his favorite travel book. Also, I suspect that even as Brown's quote led me here, Dalrymple will lead me to more fascinating books.

The book won the 1990 Yorkshire Post Best First Work Award and a Scottish Arts Council Spring Book Award; it was also shortlisted for the John Llewellyn Rhys Memorial Prize. From the Holy Mountain, his acclaimed study of the demise of Christianity in its Middle Eastern homeland, was awarded the Scottish Arts Council Autumn Book Award for 1997; it was also shortlisted for the 1998 Thomas Cook Award, the John Llewellyn Rhys Prize and the Duff Cooper Prize. In November 2007, William received an Honourary Doctorate of Letters, honoris causa, from the University of Lucknow University for his outstanding contribution in literature and history, and in March 2008 won the James Todd Memorial Prize from the Maharana of Udaipur.