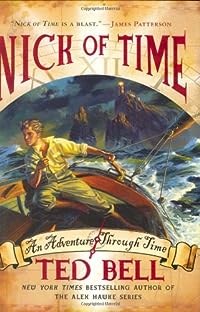 Nick and his sister, Kate, begin gathering vital information for Winston Churchill as he tries to warn England of the imminent Nazi invasion.

So. I decided to write a novel in that spirit, but one with language easily grasped by contemporary readers, and a quicker pace, more tension, more highs, more action. I wanted to make this book about heroism, thinking it was in short supply at the time, at least at the YA level. I wanted my two personal heroes, Winston Churchill and Admiral Lord Nelson, to appear in the book as role models for the ideals I was aspiring to portray. I decided instantly that I wanted Nick and Kate to live in that lighthouse. Enter the villainous Captain Billy Blood and his evil companion Snake Eye. If people have half as much fun reading this book as I did writing it I'll consider it time well spent. I am proud to immodestly state that my happy little book won the Chicago Librarian's "Best of the Best" First Novel in, I think, 2003 and a heartbreakingly wonderful review in the LA Times. It's a "Family" book, just like Treasure Island.

This book deserves all the praise it is getting. Only once did the plot strain my credulity (and it wasn't the time travel--that's all part of the fun.) I give it a five because all the excitement is combined seamlessly with real, bedrock values like loyalty, courage, and duty.

As if that isnt enough, a time machine is thrown into the mix, and soon theyve traveled back to 1803 to help one of Nicks ancestors win a naval battle against a fearsome pirate named Billy Blood. My only critiques, really, come in the form that almost everyone in the book had spent a lot of time on the water, and therefore most everything was filtered through a nautical lens. God was referenced frequently, but I could never get a feel for where the author stood on the matter, since He was mentioned in a lukewarm way most of the time. Also, I dont really view this as a negative, since I actually enjoyed them due to them being well written, but there were a couple pretty intense naval battle scenes that were mostly gore-free, but I thought I should mention anyway. *gags*) Altogether, it has its issues, but I thought this was a very fun adventure through time. It might be enjoyed more by an audience a little younger than myself, but it was still a unique adventure that Im glad I was able to take part in.

The time machine element is not even introduced until halfway through the 400+ page novel, and by then readers wont care anymore. NICK OF TIME may only appeal to those who can deal with a lot of nautical terminology, who are willing to sacrifice character and plot development for the sake of a vaguely interesting concept, and who think that one okay child protagonist makes up for all the other unappealing ones. There are millions of other better historical fantasy books for readers of all ages out there.

I read this book because my husband bought it so I could read it to our son. Our hero is young Nicholas McIver, the son of a lighthouse keeper and "birdwatbcher".

Ted Bell's Nick of Time is part of the Alex Hawke series, Bell's line of spy adventure novels. Inside Nick finds a time machine, along with a letter, and learns the Captain and his entire fleet, Nelson's men, are under attack by the treacherous Billy Blood. Hobbes and Kate stay behind in 1939 to warn Churchhill of the impending Nazi invasion, while Hawke and Nick travel back to 1805 to help defeat Billy Blood, who travels throughout time, kidnapping children and livestock, and holding them for ransom. Nick of Time is a young adult book, but will capture the attention of any reader with its richly drawn characters, exciting action, and tender emotion for parents, for one's country, and for family.

I usually love time travel stories. So I should have loved this book. The first chapter is about nothing except Nick's love of sailing. I suppose it's for building character but it also eats up precious time and bloats the book. Pages and pages are spent on unnecessarily long descriptions of the island, the war, Nick's love of sailing and other settings around the island.

Recently I finished the book "Nick of Time", in which a boy---Nick--and his little sister, Katie, find an old sea chest half-buried in the sand on one of the many beaches that surrounds the lighthouse in which they all live. Nick and his sister go visit their friend, Gunner, who used to be in the army, to see if they can find out more about the mysterious chest. And so Nick, Katie, Gunner and Lord Hawke travel back in time to the place they assume Blood is hiding with Jipper.

Very good message and morals. ANYWAY, so it wouldn't be good for little girls, but my 10yo boy ate it up, and I was fine with him reading it. Nice line: "A hero is merely a man never afraid of being called to heaven because he is certain he has done his duty." Attributed to Lord Horatio Nelson in the book, but don't know if he really said it.

Little known by them a mysterious pirate named Billy Blood seeks to find this treasure as well and even threatens Nick by capturing his dog and killing him if Nick doesn't hand over the treasure. Just as Nick receives the threat from Blood his father must seek a new house in London due to his involvement in the spy ring.

He is the author of twelve consecutive New York Times Bestsellers. His novels include the Lord Alex Hawke series of spy thrillers published by HarperCollins and the Nick McIver Time Travel Adventures published by St. Martins. He was formerly one of the leading talents in advertising, having won every award the industry offers, including numerous Clios and Cannes Gold Lions, and, as Worldwide Creative Director of Young & Rubicam, the Grand Prix at the prestigious Cannes Festival.