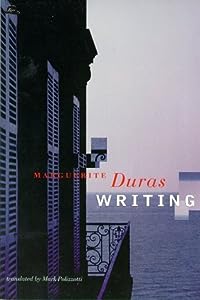 Written in the splendid bareness of her late style, these pages are Marguerite Duras's theory of literature: comparing a dying fly to the work of style; remembering the trance and incurable disarray of writing; recreating the last moments of a British pilot shot during World War II and buried next to her house; or else letting out a magisterial, so what? To question six decades of storytelling, all the essays together operate as a deceitful, yet indispensable confession.

A rather slight piece containing what appears to be some of the thoughts floating about in Duras' head on the subject of writing, circa 1993. At first, Duras' thoughts focus (loosely) around the country house she writes in and the "solitude" she finds there, both literally and figuratively. Duras is seeking only to describe them- and they are almost exclusively mental conditions (given some material help from certain external aids) created by the writer herself. Then the thing takes a roundabout left turn brought on by a free association somewhere in her descriptions of the village near her house and suddenly we are talking more and more about death. Writing as death, death as bringing on and inspiring writing, death's impact on her "solitude", it's impact on her memories and the formation of her psyche- especially the lingering impact of the Second World War. And we end, Before Sunset-like, wandering through ruined Rome and discussing death and life and writing and unspoken longing until we wander right off the page. There's a big element of the public discussion in France that's still that way.(There's a lament for '68 in here, too.) That might explain why her writing felt somewhat dated as well- for example the existentialist/minimalist toned final chapter in Rome. Someone more well versed than me would have to tell me whether Duras always wrote like this- that is if her writing had not changed significantly since the war, or whether this is a throwback. A brief writing, without grammar, a writing of the words alone. Like a temporarily abandoned room awaiting lovers who haven't arrived yet because of bad weather." "A solitary house doesn't simply exist. The kind that comes with war, those mountains of war on Earth." "Before me, no one had written in this house. Writing is not even a reflection, but a kind of faculty one has, that exists to one side of oneself, parallel to oneself, another person who appears and comes forward, invisible, gifted with thought and anger, and who sometimes through his own actions, risks losing his life."

This chapter has the worst writing in the whole book. It's a bizarre chapter/story; it reads like a warped mini-play. This short story is odd, but I quite liked it. The fourth chapter interested me, but didn't have as much depth as I would've liked.

Only Writing was worth reading, if I'm honest, and even that only had its moments, with an occasional passage that stood out. Perhaps if I had previously read Duras I would have been more interested or more lenientas it stands, on its own, the collection left me unmoved and, too often, impatient with the generalities and annoyed at the inconsistencies. Aren't there ideasstoriesin the minds of writers that they think need to be told, and that they therefore go on to write?

Marguerite's father fell ill soon after their arrival, and returned to France, where he died. The difficult life that the family experienced during this period was highly influential on Marguerite's later work. Duras's early novels were fairly conventional in form (their 'romanticism' was criticised by fellow writer Raymond Queneau); however, with Moderato Cantabile she became more experimental, paring down her texts to give ever-increasing importance to what was not said. Marguerite's adult life was somewhat difficult, despite her success as a writer, and she was known for her periods of alcoholism.