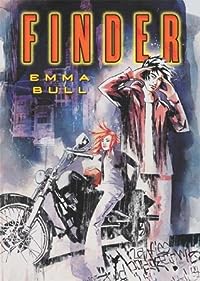 For Orient and Tick-Tick, it's just home.

A seductive new drug lures young runaways to their destruction.

A mysterious plague spreads through the streets.

And beneath the clock tower on High Street, Bonnie Prince Charlie lies slain by an unseen hand.

A cop named Sunny Rico exploits Orient's talent for finding objects to track the killer and leads both herself and him into the darker secrets of Elflands immigrant citizens.

While elven magic does not work in the human world and technology does not work in the Elflands, both work in Bordertown inconsistently and with interesting effects. Humans, elves, and halflings, troubled folks who are running away from their pasts, or have trouble fitting in anywhere else, inhabit the city of Bordertown. Reading this book a second time brought back a lot of painful and wonderful memories of my close friend and made me all weepy.

This book breaks my heart in the best possible way every time I read it. It was dark by then, and I tried to get her to let me turn the dome light on on the way home so that I could finish. I was forced to wait until AFTER we got home and AFTER the groceries were put away before I could curl up in my Reading Chair with the book and a blanket. You've told us TENS OF TIMES how you HATE reading about relationships!" on me, let me clarify. Those friends you have that you still remember staying up til three am with, laughing and rewinding mixtapes to play that one song a fiftieth time, reading passages from books that were simply FRAUGHT with meaning, that never let you forget that time that you misspoke in front of someone you were trying to impress and now it's just a thing you say to each other to crack each other up? Those are the kinds of friendships you read about in books like Finder.

Orient is the Finder, a human born with the elven gift of finding objects. The drug is mutagenic and the promise is, it makes humans into elves.

But while all that would've earned a two- or three-star rating, I bumped this one down even further because (view spoiler)I am really, really, really tired of reading books where the author kills off the most interesting character so the protagonist has a reason to grow/fight/act crazy/get revenge/whatever else the plot might require (hide spoiler)

This time the thing is a drug that the lost and unhappy humans of the Borderlands believe can turn them into immortal, beautiful elves.

Unfortunately, I did so on a trip, and was so busy I could only read little bits at a time in between other books. (The story could be much longer, never mind.) This is a book that is better read immersively. and yet I don't believe I want to start over and have another go at it, as there are so very many other books on my to-read lists.

The world building is complete, but definitely feels like fanfic in that the reader is supposed to supply some of the background. Another slightly strange thing was that I kept forgetting that our protagonist was supposed to be male. Is it just because in physical fiction I'm used to reading stuff with female protagonists?

Once the magic came, it became Bordertown, where the magic from the elf world leaks in to the mundane world, and all kinds of people live there. The book also has an excellent /world/.

The story itself is a rather average mystery with just minor supernatural elements (i.e. the hero's mysterious ability to find anything, as long as the question is asked properly), but it moved along nicely and I found I'd quite enjoyed the book when I finished.

Bull and Shetterly created the shared universe of Liavek, for which they have both written stories. With Steven Brust, Bull wrote Freedom and Necessity (1997), an epistolary novel with subtle fantasy elements set during the 19th century United Kingdom of Great Britain and Ireland Chartist movement.