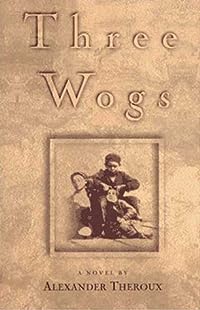 Alexs first published thing (were on first-name terms now) is almost as bizarre as this review. Three Wogs is a politically incorrect triptych-novel set in late 1960s, with each protagonist representing a particular type of disagreeable racist, and Alexs task is to flay their backward attitudes alive with his divinely satirical prose.

Childe Roland is of ignorance and stupidity An underground wall is invariably the Rosetta Stone of the troglodyte. The lower classes, Lady Therefore whispered, confidentially pushing his head into her shoulder, thin as a wishbone and suffocatingly perfumed, have been the raspberry seed in our wisdom tooth for a long, long time.

Therouxs dip-shit, maliciously ignorant brits in Three Wogs arent as self-conscious, but theres no mistaking them for their thick skulls. Racists like these are properly shut up within the covers of a novel, of a fiction, where they should sing as eloquently and offensively as the pen can cause them to do. One should continue with other diabolically talented bigots like Simon from Take Five, not to mention Therouxs subsequent three novels. And Therouxs book is a kind of anti-racist, anti-misogyny, anti-bigot rant. And frankly Therouxs book is likely not to be interested specifically in what his characters believe qua their beliefs, but rather more so what role a certain attitude towards language and its being play in relation to the holding of those beliefs; that there is some relationship between the desacralization of language, a clinging to its mere rude and crass use, and the mud-brained kind of things bigots hold to. Even should a causal relationship between a cultivation, refinement, holding-as-sacred of language and some kind of moral elevation not hold, there would seem to be a direct line between ignorance (and all ignorance is ultimately grounded upon language) and malice. Alex defends his style, qua style, from charges of having caused the exasperation of a reviewer (her word) by having written and published the following sentence, The utter impossibility of alteration, determined through centuries of unquizzical resignation and fortified by a trust in the fancy of a capable God, makes of the grey day in London an inexorability that translates into the accepted gratitude of a traditional pain known to an untraditional pleasure not. Apparently this reviewer (and does one begin to suspect the God-like powers of editors spurned?) held to the mistaken preference that Theroux should have said, The English cant change their rainy weather, and so they accept it. So, it might be a stretch on my behalf, and it might miss a bit of what Alex is arguing in his fictions and in his essays, but I suspect that Im standing on at least a little bit of solid ground when I suggest that the manner in which we relate to our language, the kind of thought we give to it, the manner in which we treat our language as an end in itself, perfectible as a walnut serving bowl turned upon a lathe is perfectible, our intention to speak truthfully and beautifully, that we never treat our language ever as a mere means but as something to be loved for itself, well, I think that such a cultivation of our relationship with our languages just might have something to do with the way we relate to our world and to the other human beings which populate that world. I come down on the side of amplificatio--as did Burton, Montaigne, Rabelais, Sterne, and others memorably innumerable.

Three Wogs is the work of a verbal sorcerer and deep-seeing satirist unafraid of prolixity or obscurity in the pursuit of a complex effect: the grotesque real, the dusklight under which social aversions reveal erotic fears and fantasies the depths where "horror and pleasure coincide said Leiris. Roland blinked his eyes to adjust them to the darkness, then disappeared into a stairway like a bit of dirt into a Hooverand stepped into the damp cellar. The cold light of tiny bulbs, blue and pennysized, strung out between eerie shadows and revealed a hushed ash-grey tomb, a cell of must, cannibalized, as if by Mulciber, into a warehouse for those who work by night the dark, witching hours that slowly pass, soured, it always seems, by those deep and unassignable final causes that desperately remind us of our odd naked frailties and whisper to us we owe God a death.

I acknowledge that Im pretty much a killjoy when it comes to literature and generally avoid anything that may make me laugh (thats what people falling down in the rain are for), but Ill be damned if theres a single page where I dont positively beam with a smile when reading Theroux. Three Wogs is hard farce, something that, if done wrong, is going to fail spectacularly (like Meatrape).

Like William H Gass after him, Theroux wallows in his own meanness, bigotry and hatred and that of his characters, hence the fitful exuberance of his prose. Instead, he indulges in the subject matter as far as humanly possible or, dare I say it, as far as is apparently tasteful, so that readers are forced to legitimate it in terms of the difference between the author and the (omniscient) narrator; Theroux himself warns us ingenuously to Learn how to separate the duck from its quack. The language is that stuffy, pompous product of attempts of the lower middle class to mimic the upper classes (people like us) or the literary style of the late eighteenth and nineteenth centuries, only it lacks the imagination or the endurance or the humour or the generosity of John Barths earlier Giles Goat-Boy. If nothing else, the authors disdain for his characters (even the wogs) is infectious, so you cant help feeling the same way about the book as a whole, assuming you dont approach it in the spirit of apologism (as practised by weird little apostles and juvenescent...American-born stooges). Note how all three of these sentences expand uncontrollably by use of the Post-Modern list technique (that notorious substitute for story-telling and character development), which gives the misleading impression of encyclopaedic observational and descriptive skills (Tell them everything...perceive, do not analyse). As was said by the Catholic Church of Black Mischief, this story is - "disfigured by outrageous lapses, which would be a disgrace to anyone professing the Catholic name." (Not that I have any sympathy or concern for the good name of Catholicism.) The irony of Alexander Therouxs writing is that he is an evangelical Conservative Post-Modernist who does in the name of Post-Modernism what he cant do in the name of Conservatism. Colonial and Post-Colonial Racism What emerges indirectly from a reading of this novel is a better understanding of the conservative underpinnings of racism at least as far as it regards immigration. Until the recent wars and disputes in the Middle East and Africa, migration followed the breakdown of colonialism, as former colonies fought with their mother countries for independence and civil wars resulted between the rivals. On the other hand, inhabitants of the mother country were confronted by and forced to acknowledge its failure, and they looked for scapegoats. When refugees arrived in the mother country, they encountered massive racism. Just Like Milo Yiannopoulos In this book, Alexander Theroux positions himself in the Post-Modernist vanguard of this movement.

Theroux calls his own writing "satire," but in a way it seems more accurate to call it a kind of "insult comedy." As I understand it, satire homes in on hypocrisy and moral failure, pinpoints its targets, catches them in their most indefensible moments. Whatever Theroux's aspirations, the book he has written unfortunately feels a lot like a highbrow (or, from another perspective, pretentious) version of Family Guy. His later novel Darconville's Cat is full of this kind of invective as well, but in that case the invective was thematized, contextualized. And, again, this is not ironized or contextualized in any way; the narrative voice is not challenged; if one begins to feel that Theroux is at least as much of an asshole of any of his characters, the book provides one no refuge. After all in Theroux's other books the insult comedy is still present, and though it may not be as pervasive, this is only because it is given figures of contrast who pass Theroux's stringent tests of non-despicability by being beautiful and brilliant and well-spoken -- and white, straight, Catholic, erudite in an old-fashioned sort of way, prone to collecting factoids and clever quips, in short suspiciously similar to one Alexander Theroux. In the end I couldn't help feeling like Theroux's objection to racism -- and to everything else he criticizes in Three Wogs -- is fundamentally that "the people who do this are not enough like me." It's a shallow, boring, childish worldview, and one from which I have a hard time extracting anything interesting. I don't know what is going on here -- there's just a liveliness and moral complexity in Darconville's Cat, a self-awareness about all the mean jokes and a welcome ironic distance, that is just missing from his other writing.

____________________________ Three Wogs, Alexander Theroux's first novel/collection of novellas, showcases all the goodness apparent in his later works: Satirical to the brim which easily switching between the Horatian and Juvenalian variety, poignant in its descriptions, verbose par excellence and fitted with an amazingly finely tuned ear for sociolects. While Mrs. Proby Gets Hers and Childe Roland lean more towards the traditional spectrum of story-telling, it is the last story, The Wife of God, which showcases Theroux's distinctive voice the best: A jumble and tumble of Saints, fictional and real books, Theosophists, Philosophers, archaic and rare language, Religion, History and Art - it's all there. This might seem minor, but it's extremely interesting how Theroux's earlier stories shape his later works.