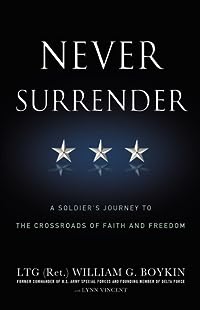 Never Surrender: A Soldier's Journey to the Crossroads of Faith and Freedom

General Jerry Boykin is one of the original members of the Delta Force and has spent the majority of his career in Special Forces.

He was commander of the Delta Force team portrayed in the movie Black Hawk Down.

Read the Book "Never Surrender: A Soldier's Journey to the Crossroads of Faith and Freedom" Online

This book is a lot thinner than what you would expect, but you have to keep in mind that this is a testament of Boykin's Christian faith, not self-glorifying "Look what I did and how cool I am" drivel like Eric Haney'sInside Delta Force: The Story Of America's Elite Counterterrorist Unit.

Boykin General Boykin came to public attention in the most unfair way; he was the target of a media hit piece. The book is a recounting of the role that faith played in a soldiers life and how because of that faith he became the target of the media.

Truthfully many of the "freedoms" these people enjoy are more like slavery, but they can't enjoy them anywhere else in the world, so you would think they would fight hard to preserve them here. But, I also hope that military commanders took the soldiers aside after the story and explained to them why it wasn't for them to disapprove of the American people..." Mr Arkin thinks that soldiers aren't citizens. It's frustrating that stupid people are allowed to hold down jobs, express opinions and pursue happiness, but Oh yeah that's the freedom we're fighting to preserve. His quotes are quite telling: "These soldiers should be grateful that the American public...(does) still offer their support to them...Through every Abu Ghraib and Haditha, through every rape and murder, the American public has indulged those in uniform, accepting that the incidents were the product of bad apples or even of some administration or command order..." Lisa's thoughts: This guy stood on the street yelling "baby killer" at the returning Vietnam vets and now he's really irked that he's been put in his place!!! More from Mr. Arkin: "So we pay the soldiers a decent wage, take care of their families, provide them with housing and medical care and vast social support systems and ship obscene amenities into the war zone for them, we support them in every way, and their attitude is that we should in addition roll over and play dead, defer to the military and the generals and let them fight their war, and give up our rights and resposibilities to speak up because they are above society?" ...an ugly reminder of the price we pay for a mercenary- oops sorry, volunteer- force that thinks it is doing the dirty work...America needs to ponder what it is we really owe those in uniform." Lisa's thoughts: Oh so much to say...I'll make a list! I think they're over their so we don't have to roll over and play dead. We the citizens...er, I mean the civilians also have responsibilities, and yes those include caring for the people fighting on our behalves and their families.

Overall, this book is an influential read, as it teaches the most important life lesson, to never surrender. Boykin who tells his story becoming the Commander of the U.S. Army Special Forces and the founding member of Delta Force. Once being a part of Americas most secretive Special Forces group, Boykin journeys into some of the most dangerous operations risking his life for what he believes in. Throughout his journey in Delta Force, Boykin writes the experiences in the Battle of Mogadishu where the remaining soldier go race to find their brothers who had been taken hostage. During the biography, there is no plot of other than the readers learning about Boykins operations while being in Delta Force. In the genre of military and war, a common theme and life lesson is anything is possible if you dont give up and fight for what you believe in.

From his depression era birth, his father going off to WWII and coming back legally blind, to almost losing his arm, this story reads quickly and one can only admire the growth in the General's military career but for his reliance on God to help him through the tough times. The press smeared his name and his career with false statements, innuendos and out right lies but his faith helped him stay strong and let God handle exonerating him.

Jerry Boykin dazzles the reader with war stories while interspersing the text with details about how God was at work in his life through the various operations & trials he faced. I found Never Surrender to be captivating & encouraging, with never a dull moment.

The book addresses all those issues with an honest-to-the-core account of what his actual comments in those speeches at numerous gatherings were and how he managed to come out triumphant.