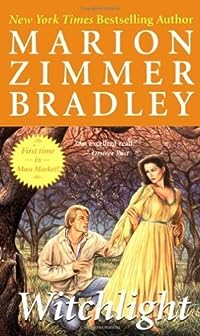 Marion Zimmer Bradley, one of the most beloved and praised fantasy storytellers of our time, has once again written a compelling and powerful novel with larger-than-life characters.Winter Musgrave's past is largely blank, her memories missing or tissue-thin.

And she has the terrible feeling that something horrible happened in her empty past--results of which are now haunting her with unbridled fury.Seeking help, Winter turns to Truth Jourdemayne and learns that the key to unlocking her lost memories lies within herself--and in the magickal circle of friends in college.

Winter must reconstruct it is she is to save her life.Not just the story of a woman's search for her missing past, Witchlight is a powerful novel of contemporary fantasy that pulls readers in and hold them until the final page.

I never read this author before, despite her celebrity status in the speculative fiction genre, and this book definitely wasnt the one to start. I disliked her, and my attitude towards her spilled over to her story.

The third MZB book I've read, and it failed to deliver at every level.

I've read a few books by MZB, so I was pretty surprised at the subject of this book. Winter is a young woman running from something that she is unable to describe. It isn't until she once again finds dead, flayed animal corpses on her front door that she attempts to get help from local psychic researcher Truth. The magic in the book is the best part, which isn't surprising for MZB- she has a knack for making magic enticing to read. This is one that I'll probably be trading with friends or the local used book store for other reading material.

I love Marion Zimmer Bradley's writing but have never read her books outside of those associated with the Mists of Avalon series. Everytime a new character was introduced I rolled my eyes.) awakens to find herself in an unfamiliar house where strange things keep happening and no memory of her life except that she checked herself into - and out of - an insane asylum.

It isn't really necessary to read them in order, although you will miss out a little on the backstory of some characters. And there's been some uproar about the fact that this book was co-authored (ghostwritten, completely written, noone seems to know for sure) by someone other than Marion Zimmer Bradley, despite her name being on the cover. You really wanted to know what happened to Winter and cheered for her when she started making discoveries about herself. But by the end of the book, the pace was all off and things started happening too quickly. I've got one more of the Light series at home that I'll probably read, but they're definitely not books I would seek out otherwise.

Witchlight cannot even hold a pale candle to author Bradley's acclaimed The Mists of Avalon. Bradley wraps things up with a melodramatic scene in which Winter reunites with her (now dead) former boyfriend.

Although the main character was a bitter woman, kind of like Truth was in the first book, Winter finds herself and discovers that she doesn't have to be so bitter and angry over her past and how much forgiveness heals. I wanted to learn more about the "Grey Angels", but that seems to be being saved for a later book in the series.

It has several of the characters present in the other two books, and they play a somewhat minor role.

Marion Eleanor Zimmer Bradley was an American author of fantasy novels such as The Mists of Avalon and the Darkover series, often with a feminist outlook. When she was a child, Bradley stated that she enjoyed reading adventure fantasy authors such as Henry Kuttner, Edmond Hamilton, and Leigh Brackett, especially when they wrote about "the glint of strange suns on worlds that never were and never would be." Her first novel and much of her subsequent work show their influence strongly. Bradley wrote many Darkover novels by herself, but in her later years collaborated with other authors for publication; her literary collaborators have continued the series since her death. For many years, Bradley actively encouraged Darkover fan fiction and reprinted some of it in commercial Darkover anthologies, continuing to encourage submissions from unpublished authors, but this ended after a dispute with a fan over an unpublished Darkover novel of Bradley's that had similarities to some of the fan's stories. Bradley was also the editor of the long-running Sword and Sorceress anthology series, which encouraged submissions of fantasy stories featuring original and non-traditional heroines from young and upcoming authors.