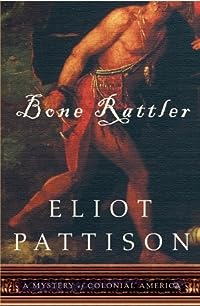 Aboard a British convict ship bound for the New World, Duncan McCallum witnesses a series of murders and seeming suicides among his fellow Scottish prisoners that thrusts him into the bloody maw of the French and Indian War. As the only man aboard with any medical training, Duncan is ordered to assemble evidence to hold another prisoner accountable for the deaths - or face punishment that will mean his own death.

Following a strange trail of clues that seem half Iroquois and half Highland Scot, mesmerized by the Lord Ramsey's beautiful daughter, and frequently defying death in a dangerous wilderness populated by grizzled European settlers, mysterious scalping parties, and Indian sorcerers, Duncan McCallum, exiled chief of his near-extinct clan, finds the source of all evil at the site of an Indian massacre.

The Jacobite rebellion in 1745 was decisively put down by English forces at the Battle of Culloden in 1746. They wanted, once and for all, to destroy Scottish culture and force these heathens to be English. Duncan McCallum and his brother Jamie are not only the last of their family, but nearly the last of their clan. When their fathers and uncles are hung at Culloden, Duncan becomes chieftain of a clan of ghosts. Duncan keeps a list of his ancestors on a piece of parchment, and when he feels most disheartened, he reads them out loud to keep them alive in his memories. When he is betrayed, his 80 year old uncle is hanged, and Duncan finds himself on a ship to Edentown, NY, where a metal collar will be fastened around his neck for seven years. The Scottish people believe many mystical things; some might call them superstitions. This belief in intangible things, beings that exist beyond science or reason, has prepared Duncan better than most for the strange occurrences he is going to experience in the new world. The mystical elements of the book come fast and furious as Duncan tries to unravel the many times obscure utterances of a local shaman named Conawago. As the rich culture of his clan is being eradicated, he is learning the culture of the New World. Wise words from Sarah, the oldest daughter of the Ramsey family, who has become a ghostwalker, caught between two worlds, after being taken and living with the American Indians for several years. These mystical beliefs, that existed before civilization and religion labelled them superstitions and made us embarrassed to know them, have been nearly lost.

This book introduced me to some American pre-revolutionary history to which I'd never been exposed, and gave me a hint of the culture of early native-Americans peoples who faced their own doom at the beginning of the anglo-American story. I cared about the protagonists, and for the unknown "real" people who lived through those early times. When I finished this book, after 2 months of working my way through it slowly, I moved to Mr. Pattison's earlier book, The Skull Mantra, and found again...a mystery that I have to have solved, and a story that is hard to understand for its unfamiliarity.

This was the story of a Scot named Duncan McCallum who has been sent to the Colonies as a prisoner of the English. When they got to America I had a very hard time relating to Duncan, who at times seemed to be such a wimp and at other times was brave beyond his calling.

21 NOV 2013 -- a fantastic read about what took place in America between the Pilgrims and the Revolutionary War. This book is fantastic and I am definitely going to download the next two in the series.

Here is the Publisher's Weekly review so you know what it is about: "It's the mid-18th century, and young Highland Scot Duncan McCallum is on a convict ship bound for the New World. Once indentured to empire builder Lord Ramsey as a tutor to his children and connected to his utopian community in the Hudson Valley, Duncan scrambles to understand both his new setting and the continuing series of murders that follow in his wake.

Because of his actions in trying to hide a family member from harm Duncan McCallum a High Scot, is placed in a prison, beaten at times that his skin is rare, and then sent on a voyage to Colonial America as an Indentured Servant to the Ramsey Company. Many appear to be jumping overboard, others fall prey to some strange illness and all succumb to something eventually as the brutal treatment they receive is graphically described by outstanding author Eliott Paterson in his novel Bone Rattlers the first in the Duncan McCallum mystery series. But, strange visions entered his mind, he saw a womans ghostly figure, the faces of those who died and Duncan felt himself dragged overboard was it all a nightmare or what was really happening to him. Watching the tutor to the Ramsey children murdered on board this horrific ship, Duncan has not choice but to fill the position after receiving this black stone from his friend Adam with strange engravings and carvings on it as a warning from the tutor from the beyond in the form of cryptic messages. Before landing in the New World Duncan and one of the keepers Lister recount their pasts when their lives were better in order to survive the horrors that would come. Pitting different groups against each other is what Lord Ramsey has in mind as I continue my review of bestselling author Eiott Pattersons novel Bone Rattler. Realizing that Professor Evering was murdered and convincing those in charge of the fact, he is presented with an alternative to serving hard labor. From the start the author grabs the reader and holds his/her interest as you learn about the past, build in ideas for the present and learn about more about both France and England, their relationship with the Indians and how they interacted with the Huron and Iroquois tribes. As the author through Duncan explains that Evering did not complete the ritual another did. Finding out the connection between Evering and one of the Ramsey children started a chain of events that would change what he set out to do. The links begin to form as he encounters many who would tell him why they are after him, what the Indians want and the ties with Evering. Duncan has been chosen to join in the search but many obstacles come his way and then he encounters an Indian named Conawago and things change. Recalling an old friend named Jacob the Fish, dealing with the storm and hoping to find Sarah, he tells him that he was in the Ramsey Company. As the journey to find Sarah continues you learn who is to be trusted, many truths about the Ramsey Company and just how this father felt about finding his daughter. Sarah, mysterious and beautiful, the British military officer, and English Vicar, several lieutenants, majors and many Indians and one Scot named Duncan in the center of it all. An ending that will definitely tie it all together and one man named Duncan be in the center of it. What happens to the Ramsey children and who will finally decipher the sign of the forest?

The main character is Duncan McCallum, a Scottish prisoner on his way to America, who soon finds himself in the middle of the battle between the English, the French and the Native Americans - all while he has to try to find a way to clear his friend from a murder charge. First of all, the parallels between Duncan McCallum and Shan are a little too many and too obvious. But it's all a little confusing, something I often noticed with the Shan books as well, but there it didn't bother me as much because of my love for the characters. I found that once we get to know some of the characters a little better (like Woolford), the book became a lot more gripping. What's also interesting about the setting is that as a reader you know so much more than Duncan at times that it can be a little frustrating.

Also, Pattison seems to know a lot about Tibetan culture and as much as one might expect of an American about American history and culture, but I have a really hard time believing his English characters...

The author does a great job creating a "Heart of Darkness" atmosphere in the wilderness of upstate New York in the 1750's.

Both The Skull Mantra and Water Touching Stone were selected by Amazon.com for its annual list of ten best new mysteries.