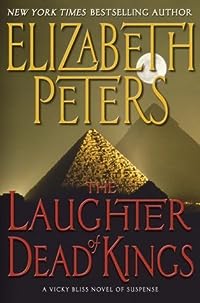 The Laughter of Dead Kings

Who stole the mummy of King Tut?

In fact, John Tregarth is the longtime significant other of Vicky Bliss.

Schmidt, "the finest swordsman in Europe", pays their luxurious way from London to Munich then Cairo, also to defend his own reputation.

Once Schmidt deflects his new paramour Suzi, who only wants his body to spy on John, the entourage swells with the Egyptian officials responsible, cousins - wealthy Ashraf and poorer Feisel - plus mummy-expert mistress Saida.

Dead hands, from her and from Tut, separately accompany notes, his is a ransom demand for millions.

Read the Book "The Laughter of Dead Kings" Online

I had high hopes for The Laughter of Dead Kings, the sixth and final installment of Elizabeth Peters' Vicky Bliss series. I've loved the Vicky books almost as much as I've loved the Amelia Peabodies--and indeed, I'd been deeply charmed to learn as of Book 5 that the two series are in fact set in the same universe. One issue is one which Peters herself addresses in an introduction to the book: i.e., the fact that the Vicky books have always been set in "present time", and yet, this book is coming out many years after the last one.

One of my favorite thing about series is getting to these later books where the relationships are more settled and you (hopefully) love the characters ever so much. (hide spoiler)

I loved reading this book the way I have loved reading every book starring Vicky and John, because Elizabeth Peters has done such a good job of making me know and love and care deeply about her characters. As always, there are one liners and bits of repartee that make me laugh out loud and want to bookmark the pages where they live, there are impassioned and touching declarations, and there are those thoughts that Vicky shares about life that I identify with so wholly. Some readers of mysteries may be troubled to find that they can identify characters or pick out some of the bad guys before their revelation to the sleuths--but for this series, in which there are recurring heroes and villains, this is in many ways a game that is played with the readers. Although I read this book in fewer than 24 hours, the pace of my reading did slow down near the end, because I realized that with every page I read, there was one fewer new page of Vicky.

Peters, especially those featuring either Amelia Peabody or Vicky Bliss. It feels like Peters is wrapping things up; she already has something like 70+ volumes to her name, and the last Amelia Peabody book felt like a last one.

Peters' last book about art historian sleuth Vicky Bliss was published fourteen years ago, and since then, I and lots of others have been waiting for another one, while Peters continued to write more Amelia Peabody Emerson novels instead.

I enjoy the characters of Vicky Bliss, John (formerly Smythe) Tregarth, and Anton Schmidt and the interplay between them, but by the latter parts of this book, it seemed that the plot had run out of steam and Peters had run out of ideas. It turns out that John is actually a descendant of Amelia and Emerson.

I picked up this book because I am a great fan of Elizabeth Peters' novels about Amelia Peabody and thought this was another in the series only I did not read the small print at the bottom, which says it is a Vicky Bliss novel of suspense.

I thought I had read this before--I've read so many Elizabeth Peters novels, I got it confused with another. Typical of the author (real name Barbara Mertz), the novel had energetic, quirky characters, lots of history providing exotic or dark and spooky settings, and plays on words to remind you we're just here to have fun. And if you're a fan of Elizabeth Peters books, the last chapter was worth it.

However, when this, the last in the Vicky Bliss series came out, I was quite eager to read it as there were supposedly links to the Amelia Peabody series, with an Egyptian thread in it. While I found it to be an enjoyable read, my appreciation must be placed within the context of being a longtime fan of Ms. Peters Amelia Peabody series, as well as a more recent fan of this one For more of my review go here: https://allaboutromance.com/book-revi...

Elizabeth Peters is a pen name of Barbara Mertz.