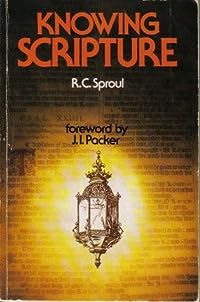 Sproul helps us dig out the meaning of Scripture for ourselves.

He lays the groundwork by discussing why we should study the Bible and how our own personal study relates to interpretation.

The book comes with good warnings about how we might be abusing our gift of reading (and thus interpreting) our Bible, and gives some practical guidelines to help minimize our distortion. Instead, I felt he looked unfavorably on any-such ploy to make God's Word more simple, and then poured out ideas and concepts to interest us in the more complex world of the Bible.

A useful guide to studying the Bible, providing rules of interpretation and study tools. Sproul says,My prime motivation is to offer basic, common sense guidelines to help serious readers study sacred Scripture profitably. That dream cannot be realized unless we know and use the tools of intelligent Bible study.Notes Hermeneutics: The Science of Interpretation 2nd rule of hermeneutics: Bible should be interpreted according to its literal sense. To interpret literally is to pay attention to letters and words; to follow natural meaning based on normal rules of grammar, speech, syntax, context. Literal sense is grammatical-historical sense; meaning which writer expressed. Literal sense isn't meant to force entire Bible into historical narrative; it's a safeguard against that, and against redefining Bible by imposing figurative meaning on passages not meant to be so. 3. Grammatical-historical method focuses attention on original meaning of text, so we don't read into it our own ideas from present day. Practical Rules for Biblical Interpretation Rule 1: Read Bible like any other book Words are still words (verbs are verbs, nouns are nouns, etc.). (This doesn't mean use existential method of interpretation.) Rule 3: Interpret Historical Narratives by Didactic Gospels are about events; epistles are about interpreting those events. Rule 4: Interpret Implicit by Explicit Bible says whoever believes will be saved, which seems to imply that anyone can be saved, but these implications are restricted by explicit teaching that God elects certain people. Rule 5: Determine Carefully Meaning of Words Thoughts are expressed through relationships of words; each word contributes to whole context. This helps us interpret passages such as 2 Pet 3:9 (which means God isn't pleased when people perish). Rule 6: Note Presence of Parallelisms Noticing antithetic parallelism in Is 45:7 shows that "calamity" (opposite of peace) is better translation than "evil." Noticing synonymous parallelism in Matt 6:13 shows that "temptation" here refers to external testing (such as of Abraham, Jesus), not to internal evil inclination. This also shows that "deliver us from the evil one" is better translation than "deliver us from evil." Rule 7: Note Difference between Proverb and Law Don't give proverbial sayings weight of moral absolutes. Rule 11: Interpret Bible with Spirit of Humility Culture and the Bible Practical guidelines 1. Practical Tools for Bible Study KJV is less accurate than original writings than most modern translations, because it uses Textus Receptus, which is inferior to more modern reconstructed Greek texts. Sproul likes New Bible Commentary by Intervarsity Press. More advanced: New International (most conservative), Anchor Bible, Word Biblical, New International Greek Text.

From chapter one: Why study the Bible? It may seem odd and foolish to raise this question since you probably would not be reading this book unless you were already convinced that Bible study is necessary. Knowing Scripture is a practical how-to-STUDY-the Bible book by R.C. Sproul first published in 1977. The first myth being, "the Bible is SO difficult that only highly skilled theologians with technical training can deal with the Scriptures." The second being, "the Bible is boring." He argues that the Bible is not difficult to read--for the most part. (Though he adds that *if* it were the world's most boring book, it would still be our duty to read it because we're commanded to know the Book.) The preponderance of boredom that people experience with the Bible came home to me several years ago when I was hired to teach the Scriptures in required Bible courses at a Christian college. The president of the institution phoned me and said, "We need someone young and exciting, someone with a dynamic method who will be able to 'make the Bible come alive.'" I had to force myself to swallow my words. (14) He concludes that the reason people don't study the Bible has nothing to do with either myth. We fail in our duty to study God's Word not so much because it is difficult to understand, not so much because it is dull and boring, but because it is work. (15) He includes this startling fact: If you have read the whole Bible, you are in a small minority of Christian people. (18) Sproul isn't saying that only Christian laypeople are lazy when it comes to reading or studying the Bible, the whole Bible. Countless times I have heard Christians say, "Why do I need to study doctrine or theology when all I need to know is Jesus?" My immediate reply is this: "Who is Jesus?" As soon as we begin to answer that question, we are involved in doctrine and theology. (22) He includes many reasons WHY Christians should study the Bible. (30) In chapter two, Sproul discusses personal Bible study and private interpretation. Exegesis means to explain what the Scripture says. The prefix his, also coming from the Greek, means "into." Thus, eisogesis involves reading into the text something that isn't there at all. He writes, "No part of Scripture can be interpreted in such a way as to render it in conflict with what is clearly taught elsewhere in Scripture." (40) He spends a good deal of time in this chapter discussing the importance of reading the Bible literally. That is, the natural meaning of a passage is to be interpreted according to the normal rules of grammar, speech, syntax, and context. The Bible may be a very special book, being uniquely inspired by the Holy Ghost, but that inspiration does not transform the letters of the words or the sentences of the passages into magical phrases. (49) To be accurate interpreters of the Bible we need to know the rules of grammar; and above all, we must be carefully involved in what is called genre analysis. (49) The third way of interpreting the Bible--which he addresses in this chapter--is the grammatico-historical method. He includes rules for biblical interpretations: Rule 1: The Bible is to be read like any other book. Rule 2: Read the Bible existentially. He adds a disclaimer here, "What I mean is that as we read the Bible, we ought to get passionately and personal involved in what we read. I am convinced that the problem of the influence of the twentieth-century secular mindset is a far more formidable obstacle to accurate biblical interpretation that is the problem of the conditioning of ancient culture." (105) The sixth chapter is about Bible study tools. He would later go on to publish study Bibles in the New King James Version and the English Standard Version so one can only assume that he approved those translations! Why have Christians been so derelict when it comes to biblical study? Actually I have discovered that the majority of people who read the first five books of the Old Testament will make it through the whole Bible. To overcome the problems so many people have with reading the Bible I suggest an alternate route to our goal.

He even gives us a warning about our hearts which is a key to reading the word.

Despite only giving it four stars, I think this book is important and should be read by anyone seeking to understand the Bible. (I suppose his many students over the years would understand what he means by the word, but most readers will not.) There was quite a bit of similar short treatments which left much to be desired.

Christians who do read the Bible are not aware of how to really study the Bible. Consider this a primary book for Bible reading.

this is going on my small stack of books to read over and over.

He recommends another book for looking into that further.

Dr. Sproul had a distinguished academic teaching career at various colleges and seminaries, including Reformed Theological Seminary in Orlando and Jackson, Miss.