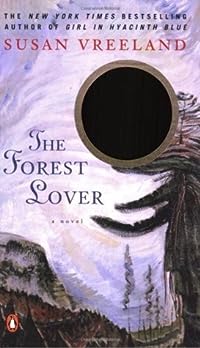 In her acclaimed novels, Susan Vreeland has given us portraits of painting and life that are as dazzling as their artistic subjects.

Now, in The Forest Lover she traces the courageous life and career of Emily Carr, who, more than Georgia O'Keeffe or Frida Kahlo, blazed a path for modern women artists.

I started this book several years ago, before I knew anything about Emily Carr, and couldn't finish it. Emily could write too. I can't recommend it to anyone who doesn't know Emily Carr's work.

This is a biographical novel about the British Columbia artist Emily Carr. Vreeland takes some liberties about the life of Emily Carr: in the novel she has four older sisters, whereas in real life Emily was the second youngest of nine children; she says in the author afterward that some of the characters "are inventions. It was obviously dear to Emily Carr - and to Susan Vreeland who spent so much time chronicling one five day visit there.

I give it an extra half-star for the strong prose within itself, but I wouldn't recommend this particular book for those who like Emily Carr's work and want to know more about her in an intriguing format. I'll probably look into Vreeland's other offerings because I know she can write well, but this particular story didn't do much more than offer itself in the coat of strong prose, particularly when there were so many other elements working against it.

This book is about Emily Carr who was a pioneer woman artist in the Pacific Northwest and who sought to overcome not only the prejudices of a woman artist traveling into untamed country, but to overcome the prejudices against the indigenous, native people and paint their sacred, cultural artifacts before they were entirely destroyed and confiscated for museums.

In The Forest Lover, Susan Vreeland gives us more than a biography of the painter Emily Carr. This is a book about the artist, Emily Carr, but also about art, women, and government greed, powerful men who are able to decimate populations when the Missionaries fail.

Canadian painter Emily Carr once said, "Nobody could write my hodge-podge life but me." With self-effacing humor, she claimed that biographers couldn't "be bothered with the little drab nothings that have made up my life." To Susan Vreeland, who's quickly become America's most popular biographer of famous artists, that must have sounded like an irresistible challenge. Now, with "The Forest Lover," her story of Emily Carr, Vreeland has found perhaps the most appropriate venue yet to express her own exuberant feminism and spirituality. What's more, by immersing herself in Carr's extensive writings, Vreeland has picked up the tenor of the painter's language - her eclectic mysticism, emotional devotion, and single- mindedness. Feeling weak and confused, she returned home "to the starched and doilied parlor of the yellow, two-story bird cage of a house in Victoria, B.C. where she'd been born, and found only hypocrisy and criticism." Vreeland picks up the story here when Emily is 33, already a confirmed eccentric, an embarrassment to her prim sisters, who can't fathom why she wants to wander around the forest looking at pagan relics and "socializing with primitives." To Carr, the attraction is profound, though vague: She hopes to "discover what it is about wild places that call to her with such promise." Repeatedly, she canoes alone up the west coast of Vancouver Island to meet skeptical Indians whose knowledge of white people is confined to narrow-minded missionaries or cruel officials. We land on her efforts to teach prissy women how to paint, a trip to France that introduced her to Post- impressionism, arguments with her aesthetically dim sisters, her time as a landlady, and an affair that Vreeland invented to dramatize Carr's sexual ambivalence. Asked how she can paint the wind, Carr answers, "By making the trees go whiz-bang and whoop it up." But in general, these scenes, which should be small gems, are merely small - inadequate to fill in the complicated itinerary of Carr's life and lacking the psychological depth to illuminate her mind.

Susan Vreeland captures the essence and the spirit of Emily Carr in her book. Emily is multi-faceted and Ms. Vreeland explores that in the aspects of her questionable childhood, her relationships with her sisters, her interactions with the local people, and her work as an artist. But as Emily tended to do throughout the book, Sophie was set in the shadows as Emily's life revolved around her pursuit of the artistic moment.

Vreeland does a wonderful job of creating Emily Carr.