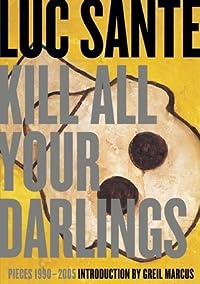 In his books and in a string of wide-ranging and inventive essays, Luc Sante has shown himself to be not only one of our pre-eminent stylists, but also a critic of uncommon power and range.

Kill All Your Darlings is the first collection of Santes articlesmany of which first appeared in the New York Review of Books and the Village Voiceand offers ample justification for such high praise.

Alongside meditations on cigarettes, factory work, and hipness, and his critical tour de force, The Invention of the Blues, Sante offers his incomparable take on icons from Arthur Rimbaud to Bob Dylan, René Magritte to Tintin, Buddy Bolden to Walker Evans, Allen Ginsberg to Robert Mapplethorpe.

Luc Sante is coolest guy I've never met, and this book made me feel excited for once, instead of burdened, to have been born a human being. Humanity uses emoticons and can't be fucked to work the shift key or distinguish between a contraction and a possessive, because what is the English language anyway but some used-up and degraded old whore who just exists to be exploited in whatever crass, hasty way satisfies your needs? Right, but despite all of this humanity has, like Ezra Pound, written a few good poems, and we need guys like Luc Sante so they can remind us of this. There's a memorable one about Sante working in a New Jersey factory during high school, which displays what I love most about this guy: the perfect tone he takes when he writes about himself. Unfortunately most people's criticism is no fun to read, because it's actually hard to say anything interesting and worthwhile about cultural products, let alone to express that in compelling language that itself has got great aesthetic merit -- unless, apparently, you are this guy Luc Sante. It reminded me of the way The Savage Detectives made me feel -- that these boys who'd previously annoyed me in the abstract with their poetry-reading and blues-listening and Bowery-slumming and bohemian aesthetics -- were actually onto something great, something I'd been missing out on.

I glommed onto the Dylan piece "I is Someone Else", where he reviews "Chronicles", and it was, you know, pretty good what I got from it was this great quote which is actually Stephen Crane : An artist, I think, is nothing but a powerful memory that can move itself through certain experiences sideways and every artist must be in some things as powerless as a dead snake. Well, I liked the other music pieces too, like the review of the psychedelic freak-beat cd box "Nuggets": On the psychedelia front alone, there's zit-cream metaphysics (the Electric Prunes), brain-pan alley (the Elevators)insufferable la-la twaddle (Fenwyck) and bobbing for meatballs (the Bees) What happened to the Castaways, whose falsetto- and Farfisa-driven "Liar Liar" is th eeriest number in the box and whose photograph reveals them to have been classic chess-club geeks? There's a section on New York and its phenomena such as Rudolph Giuliani and John Gotti; there's Woodstock '99; Victor Hugo, Rimbaud and Rene Magritte (sounds like the beginning of a Woody Allen sketch where they all go to a party and try to pick up comedy moose); Tintin, Walker Evans and Wisconsin Death Trip; and finally finally a brilliant piece on Robert Mapplethorpe : Perhaps Mapplethorpe was grasping, vulgar, deceitful, disloyal, inconsiderate, exploitative, shallow, calculating, cruel, vain, racist, anti-Semitic and so on, but then, too, perhaps his biographer and his memorialist are complying with current convention, which prescribes brutal candor rather than reverence in treating the recent dead.

The essays in this collection include pieces on art, photography, poetry and music, and some more idiosyncratic meditations -- on cigarettes, on factory work, on 'hipness', on the harm done to New York City by Rudy Giuliani, on the particular madness that characterizes New Year celebrations. Though I had no great prior interest in the musical evolution of Bob Dylan or the origin of the blues, Sante's writing is so seductive that I read both pieces, and was riveted throughout.

I regret not acknowledging in my review of Novels in Three Lines how much it reminded me of Wisconsin Death Trip, and was thus thrilled to see that Sante had also made the same connection, and wrote about it in his essay "The Department of Memory." I read most of this book with my laptop whirring furiously beside me, searching the Magritte paintings, the Evans photos, the Charley Patton recordings, keeping up with all the mixed media Sante so joyously explores.

The essays in the second section are more abstract as he muses on things like the world "dope" in "Why Do You Think They Call It Dope?" He wistfully remembers the heyday of cigarette smoking in America in "Our Friend the Cigarette." In the third part there are essay related to music like "I Is Somebody Else," which is a review of Bob Dylan's Chronicles Vol.I. Also, there is a look at the original Master of New Orleans Funk, "I Thought I Heard Buddy Bolden Say" and a discussion of blues in "The Invention of the Blues." In the fourth part of the collection, Sante displays his ability to write with authority about art: seminal artist such as Victor Hugo in "The Octopus with the Initials VH" and Charles Magritte in "The Detective," as well as pop culture icons such as Tintin in "The Clear Line" and contemporary photography artists like Walkers Evans in "The Hunger Artist" and Robert Mapplethorpe in "The Perfect Moment." Part Five gives the reader more personalized essays that expresses the importance of poetry to the author.

Sante is a really interesting and talented writer.