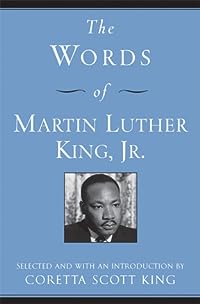 Created as a living memorial to the philosophies and ideas of Dr. Martin Luther King, Jr., this essential volume includes more than 120 quotations from the greatest civil rights leader's speeches, sermons, and writings. Selected and introduced by Coretta Scott King, this book helps keep the dream alive by focusing on seven areas of the Nobel Peace Prize winner's concern: the community of man, racism, civil rights, justice and freedom, faith and religion, nonviolence, and peace.

I've been reading a lot about Civil Rights lately, and since MLK is one of its main players, I thought I'd get to know the man a little better. Overall, I am very happy with this selection because not only does it display a lot of memorable quotes, it also gave me the wished insight into Martin's mind. Coretta met Martin in Boston in 1952, when he was 23 years old. Unfortunately, I don't know a lot about Gandhi and his politics, but the fact that he has left such an impact on the black liberation movement in the United States of America fascinates me. Coretta also talks about the never-ending death threats that her husband received, and how multiple times bombs exploded at their front porch. Another piece of information that is very dear to me is the fact that Martin divided the $54,000 prize (that he got for being awarded the Nobel Peace Prize) among SCLC, CORE, SNCC, NAACP, National Council of Negro Women, and the American Foundation of Nonviolence. Another thought-provoking impulse that Coretta gave me, was the fact that Martin often spoke up against the Vietnam war: "It is worthless to talk about integration if there is no world to integrate. The real victory was what this period did to the psyche of the black man. I also highly enjoyed the times in which Martin spoke about the American Revolution, and how the Boston Tea Party was the biggest outburst of massive civil disobedience, and that this act is celebrated, but when black men and women speak up, they are treated like criminals. Hence, rioting is not revolutionary but reactionary because it invites defeat." (This was also very reminsicent of Ken Kesey's critique of social systems in One Flew Over the Cuckoo's Nest.) And then when I got to the end of this little book, which displayed MLK's last speech I've Been to the Mountain Top and then Raegan's speech proclaiming the third Monday in January of each year as Martin Luther King, Jr. Day, I cried.

The second was that in the post-2016 election, I was hungry for words of peace, of inclusion, of trying to make sense of a world where hatred and defensiveness had become the default position. One of the things I walked away with is a new sense of working toward peace. Peace is an active state.

For instance, within the "Community of Man" section is a quote I love: "I have the audacity to believe that peoples everywhere can have three meals a day for their bodies, education and culture for their minds, and dignity, equality, and freedom for their spirits.

(As an aside, it strikes me that the courageous calls to end the horrors of racial inequality in both America the Baptist minister Martin Luther King, Jr. and Britain the evangelical politician William Wilberforce came from the lips of people of Christian faith.) My only only "disappointment" is that his "Letter from a Birmingham Jail" wasn't included.

This book is a small compilation of quotes from Dr. King's writings and speeches.

Read this book on the plan to Africa.

Martin Luther King, Jr. was one of the pivotal leaders of the American civil rights movement. In 2004, King was posthumously awarded a Congressional Gold Medal.