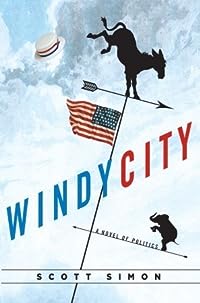 Windy City: A Novel of Politics

The acclaimed author of the intensely powerful novel Pretty Birds, Scott Simon now gives us a story that is both laugh-out-loud funny and heart-piercingas sprawling and brawling as Chicago, where politics is a contact sport.The mayor of Chicago is found in his office late at night, sitting in his boxer shorts, facedown dead in a pizza.

But as acting interim mayor for a few days, Sunny must deal with forty-nine other aldermen who have their own clashing ambitions.How will Sunny do whats best for both his family and city in a time of crisis?As The Last Hurrah embodied urban politics for a previous generation, Windy City captures politics in the multiethnic tumult of todays big city, where a stalled subway raises fears of a terrorist attack and smoke-filled rooms are abolished by no-smoking statutes.

The story takes a raft of colorful characterspinky-ringed pols, pious reformers, money-grubbers, and wheeler-dealers of every creed, color, and proclivitythrough City Hall corridors, neighborhood restaurants and clubs, weddings, sex scandals, gospel churches, police stations, and sting operations to deliver an ending that is unexpectedly noble.Windy City is a roller coaster of a novel that dips and soars through the amusement park of politics.

With echoes of Primary Colors and Thank You for Smoking, Windy City will win votes as the best political novel in many years.

Simons choice of herois an immensely appealing figure.Washington Post Book WorldPitch-perfect Scott Simon, NPR host, knows his way around politics His dialogue throws off sparks and shrieks like a Chicago El-carRecommended to all political junkies.The Roanoke Times (Virginia)A hilarious satirical novel about politics.Clarence Page, The Chicago TribuneEntertaining and well-observed renders the inner workings of City Hall with wit and aplomb.Some of Simons Chicagoans may be con artists, crooks, amoral opportunists or blowhards, sometimes all of the above, but the author still treats them with great affection and respect, creating an impressively large and diverse cast of charactersAdam Langer, The Chicago TribuneA great novel filled with emotional turmoil, gritty political decisions, murders, homicide attempts, a suicide and even a touch of romancea human and fully realized portrait of the people caught up in contemporary public life.Time Out ChicagoA big-hearted bear-hug of a novel embracing roots and family, eccentricities and failings, and dappled with the sights, sounds and grit of the Windy Citymakes this an energizing and loving contemporary urban fable.GO Magazine, AirTran AirwaysA rather sentimental, positive picture of the democratic process.

Pittsburgh Post-GazetteWindy City is funny and tender full of boisterous love for the sport of politics and Chicago.

The best political novel in years.Christopher Buckley, author of Boomsday and Thank You for Smoking

Read the Book "Windy City: A Novel of Politics" Online

Advertised as a novel of politics, Windy City delivers on that promise, and its not only about politics its about Chicago politics. The author also provides the reader with a natives view of Chicago without being too parochial and an insiders view of big city politics with one hand washing the other on an hourly basis.

Although I don't think I will be reading any more fiction by Scott Simon in the foreseeable future, I would like to pick up his non-fiction works and I will continue to enjoy him as an NPR host.

Every now and then a novel jumps up and surprises you with the depth of its characters, its texture and its ability to convey a sense of a time and place that is foreign to you.

Although Simon reached into the life and emotions of his main character, Sunny Roopini (alderman of the 48th district and acting interim mayor), he doesn't reach very far. It is not really clear whether Sunny really wants to get out of politics or not, or how he feels about being mayor, acting interim or otherwise. He loves the diversity of the city, that is obvious. First, it has given me a feeling for the lives of city politicians, the people who get things done. Second, I really like the fact that the book is a love letter to a city that is not New York. Still, I have some small connection and feeling for Chicago (more than for New York, anyway), and it is nice to read a book about it.

In brief, the most interesting character dies in the first few pages, the following political intrigue is underwhelming, and the plot can't keep enough momentum.

I never thought that I would ever say this, but the book is about politics in Chicago; food is very important in Chicago, and cuisine is definitely a thing of the people... but one gets the impression that the author is merely trying to compile in novel form a listing of every dish available in the city, or worse, that he just wants the reader to be aware of how very much he knows about world cuisine. After 400 pages, a reader doesn't know any player in the book - least of all the protagonist.

As vice-mayor, Sunny must assume the mantle of command as interim mayor until the aldermen of the fifty wards that compromise Chicagos political machine can vote a successor. Simons quick humor and keen insight make Windy City a primer for anyone contemplating politics and a handbook every citizen should have on the shelf.

It's the story of Sunny Roopini, an alderman with the city of Chicago who becomes the temporary mayor when the mayor is murdered. My mother was an alderman for Kitchener back some thirty years ago, and I don't remember this kind of stuff going on, but a city as large and influential as Chicago is functioning on a whole different level. It's the story of Sunny Roopini, a man who expects to be the acting mayor for 3 days until a new mayor is elected.

Simon should get credit for knowing a lot about Chicago and being true to its details and its politics, but definitely gets downgraded for a lack of self-editing. By page 150, were still not sure where Simon is taking us since weve gotten involved in the sappy and sentimental life of Alderman Sunny Roopini.