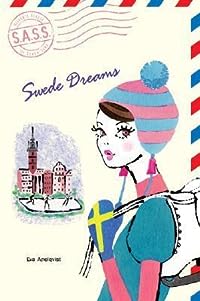 Calista Swanson has begun her study abroad semester in Stockholm, Sweden, and she couldnt be happier!

Calista and Suzanne are twins, but the only thing they have in common is their birth date.

Suzanne is a focused and gifted pianist, but a social dud.

Jonas, whod been an exchange student at her high school in Wisconsin, lives in Stockholm.

Calista loves Sweden from the moment she arrives, but .

Out of the gate, Calista came out with some rude, mean-spirited comments towards her sister, and I thought I wouldn't like her at all. She might be good at everything else, but she didn't attract cute, athletic guys the way Calista did.' "Part of me enjoyed the fact that Suzanne could never land such a hot guy." Those comments were incredibly snarky, which didn't jive with Calista's personality towards everyone else. Different ways of saying things came with a whole new way of thinking, new music, new literature, new ways to look at life, new everything. I had never thought about languages like that. Calista said Hakan looks like Prince Carl Philip and I immediately looked him up, to find he is indeed good-looking. Although it was a cop out to write your Swedish romantic interest to look like the Swedish prince. It's like writing a book set in England about someone who happens to look like Prince Harry or William. I think he only served to show that she dated guys other people liked. Calista dates guys that people set her up with or that her dad would like, because they're athletes. In one email her sister Suzanne thought of Mike, the guy she went on a date with, as a friend, and the next she was 'totally, recklessly, insanely in love' with him. I feel like she had to start dating and not get accepted by Julliard before Cal would accept her. I felt like her feelings towards her sister changed too quickly. Then she quickly realizes she only dates because people set her up or she wanted to please her dad. It's just an asinine thing to say, and how do you not know if you like someone? Just because Lena liked Hakan doesn't mean you'd be going out with him just to please her. Don't you want your friends to like your bfs? Calista said she deferred to other people, not just about boys, but about a lot of things. I think I like this one the most out of the ones I've read, because it had the least drama. I think the drama brings the books down. What I liked most about this was learning about Sweden. I was beyond shocked that Eva Apelqvist grew up in Sweden and instead of like her character, she was an exchange student in America. You wonder why there's even romance in these books at all if they don't end up together. Vikings carved runes into all kinds of things, like combs and wood. It turns it there never was a people called Vikings. In pre-Christian says, people would let their animals out to pasture on the first day of May. They wanted to make sure the woods and fields were safe for their animals, so they lit huge bonfires the night before to scare away predators or witches. Like the Egyptians, the Viking-age upper class were concerned about bringing their material goods with them to their new home, and were buried with their riches. She thought Swedish people were homogeneous, all looking similar. Most people from the Viking era weren't seafaring pirates, but peaceful farmers and artisans.

Unfortunately, her hot Swedish boyfriend dumps her by phone right away, but that just means more time for new friends and customs and food. Being away from her sister also gives Calista time to figure out who she is on her own, and to wonder why she and her twin drifted apart in the first place--and is it fixable?

(view spoiler)Well I finished this like a week ago, and Im only just now getting to write the review. They show real respect to the country each book is about, making points to destroy stereotypes and backing everything up with a lot of very real facts and research. And also, as cute as it was, I dont know why every girl in every one of these books always needs to fall in love with a local boy. Its not a bad plot point, as long as its not incredibly overused and doesnt clash with the characters personality, which in this case, it may have. Most of Calistas entire reasoning for traveling to Sweden in the first place was to visit her Swedish then-boyfriend, who turned out to be an entire garbage can of trash, didnt even show up to see her at any point, and finally wrote her a one-sentence email breaking it off with her. Not that Im complaining she had one day of hurt, then went straight to pissed off, and didnt spend much time at all afterwards thinking about him, instead delving headfirst into discovering and learning everything about Sweden. While I appreciate and did truly enjoy the feel-good fuzzies of it, it still felt incredibly unrealistic and Im just left thinking there is no way anything would ever go that smoothly.

Calista has gone to Sweden for two reasons: to get a break from his perfect, talented twin, Suzanne, and to be closer to her Swedish boyfriend, Jonas. Too much time spent on Jonas, perhaps, especially considering that (view spoiler)we never even meet him...and the only 'good' thing we know about him is that he's athletic, and therefore Calista's father likes him (hide spoiler)

As the semester unfolds, Cal begins to notice things about herself that she'd like to change when she gets back home, but for now she's content with soaking up both the language and the culture.

I feel as if this S.A.S.S book was more informative about its country more so than the other books in the series.

-------------- Calista (Cal) was initially drawn to studying abroad in Sweden because of her exchange student boyfriend, Jonas.

I immediately told my husband that I want to visit Sweden.