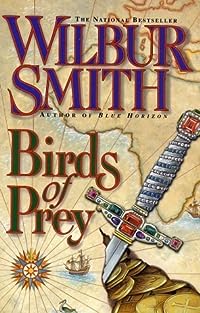 Sir Francis Courtney and his son Hal are on patrol in their fighting caravel off the Agulhas Cape of South Africa.

so begins a quest for adventure and the spoils of war that sweeps them from the settlement of Good Hope at the southern tip of Africa to the Great Horn of Ethiopia far to the north - at a time when international maritime law permitted acts of piracy, rape, and murder otherwise punishable by death.

Wilbur Smith introduces a generation of the indomitable Courtneys and thrillingly re-creates their part in the struggle for supremacy and riches on the high seas.From the very first pages, Wilbur Smith spins a colorful and exciting tale, crackling with tension and drama, that builds and builds to a stunning climax.

I might not have helped me understand history or comprehend anything fundamental to my life, but I would say that reading Birds of Prey was fun and allowed me hours of enjoyable and dashing adventure within Wilbur Smiths well written story. All in all, it is a great pirate story set on east coast of Africa in the 1600's.

Rating: 3* of five Wilbur, Wilbur...yours isn't the stuff of literary legend, but usually you buckle a *mean* swash and cause images of Erroll Flynn to dash around your reader's head (thanks for that, BTW). I don't expect autheticity of language, and don't even WANT it, in books set in the 17th century.

All of this is done quite necessarily, and at times the obvious is given despite a character knowing full well what the omniscient third-person narrator provides (i.e. When I skimmed the blurbs, the evasive language used to praise Smith's prose said things like "superlatively evocative." Hmm. But take the following gems: "Some picked out Hal's virile broad-shouldered figure and shouted unintelligible invitations to him, making their meanings plain by the lewd gestures that accompanied them" (p. In the novel Hal has nothing short of four lovers, with the first a crucial piece of plot development (a captive held governor's wife-turned-villain) being the loss of his virginity and his self-condemnation for violating his father/order's commandments of personal conduct. I am new to the genre of what my librarian termed "men's fiction," or "men's historical fiction" and I am unfamiliar as to whether these conventions are exclusive to Smith or the genre as a whole, but as a reader I feel that there is only so many "dark berry nipples" that a 550 pages book can contain. Showing us the tribes/customs, and a crucial plot point (she warns Hal of pending execution as a result of his "fierce spear" or some such). The payoff is rich, and Smith has penned a truly enjoyable tale that I almost feel would work better as an action film. With some careful pruning (nearly every description of a naked woman, a person of color, and so on), this book would serve as a manual for how to write tense action. Feminists, people sensitive to racism (no, not through the character's eyes...the omniscient narrator compares a main black lead to a cobra, bull, and endlessly reminds us of how black he is), and fans of showy language may feel quite put off. I intend on reading Monsoon, the book's sequel, as soon as I can endure another 550 pages of torturous action.

All of the good stuff that historical fiction lovers like is here; lots of period detail, sightseeing, larger-than-life characters, historical context, and so on and so forth. Soon the story branches out to include several point of view characters (all interesting, surprisingly enough) and becomes a full-blooded historical adventure with all kinds of chases, battles, romance, revenge, etc. Im kind of wondering at this point why I slept for so long on Smiths books as they are thoroughly entertaining and, if not classic literature, written well. He kind of reminds me of Cornwell but with a lot more sex (and obviously focused on Africa and not England.) Of course, the other side of the coin is I have like 50 more books to (potentially) enjoy. I heartily recommend this sizable piece of action to fellow historical fiction lovers, but just be warned that I really am not playing up the amount of times someone gets killed horribly or the dreaded beast with two backs makes an appearance, so if you dont like that kind of stuff maybe just read a Cadfael book or somethin.

Sir Francis Courtney, as captain of the Lady Edwina, has traveled to the southern-most tip of Africa in search of enemy swag and booty. Armed with a Letter of Marque, signed by King Charles II of England, Sir Francis searches for a rich prize courtesy of the United East Indian Company. It is the ninth book in The Courtney Series and the beginning of an adventure you will never forget. From England to seas and ports around the globe, eventually exploring the dark unknown depths of Africa, this book is the doorway to an epic.

For starters, I didn't know this wasn't the first book of the saga, so clearly I kind of just jumped in the Courtney's party and was a bit confused. it was entertaining, and there was a lot of adventure, though it was a bit of slow reading because no character truly caught me so I didn't really feel like reading it.

Smith's feel for Africa and solid knowledge of the time this book is set in arent from research but from love of his subject.